Nigma Takes Out Liquid 3-1 in the WeSave! EU Finals 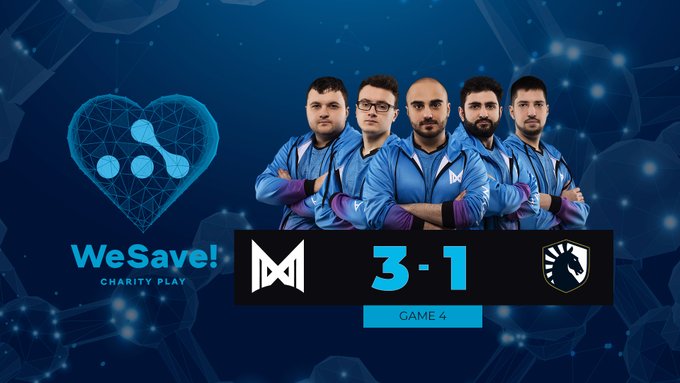 With KuroKy on Clinkz, Nigma dominated their opponent in three out of four of their matches. (Photo courtesy Nigma)

Nigma has taken the crown of EU Champion at WeSave! Charity play, defeating Team Liquid in four games. After dropping the first game thanks to some good cheese picks from TL, Nigma would come back to secure a 3-1 victory over their opponents.

Confident victory by @TeamNigma in the match vs @TeamLiquid!

Game one of this much-anticipated matchup started with Nigma breaking out the Tinker, Clinkz, and Shadow Fiend, but in doing so, giving up the Death Prophet to Team Liquid. TL’s draft seemed focused on early aggression, with a contingency for late game, while Nigma wanted to farm up and melt towers.

However, in-game, the early aggression clearly won out. Broodmother dominated early and then scaled quickly. Kuro “KuroKy” Salehi Takhasomi’s Clinkz, while definitely sufficient, wasn’t good enough to make an impact, and TL would take the first game after concentrated and swift aggression from the roaming spider.

Nigma seemed happy with KuroKy on Clinkz but added a Night Stalker to help create additional pressure on their opponents. Meanwhile, Team Liquid went back to the Broodmother, looking to replicate their success. But Nigma had one trick up their sleeve; the Aliwi “w33” Omar Meepo.

As the lane’s started, Liquid again went for early aggression. But this time, Nigma was more comfortable with their heroes, giving up fewer kills, and trading better overall. The big question was whether the brood or the Meepo would win the farm battle.

While both team’s carries seemed to be scaling, the Meepo was slightly edging out TL. In every engagement, the multiple clones of W33po would turn and kill numerous members of Liquid, facilitating even more farm for the carry. Ultimately this would lead to Nigma’s victory in the second game.

If it isn’t broke, don’t fix it, so Nigma again grabbed the KuroKy Clinkz, while Team Liquid opted for the Earthshaker/Mars combo to try and limit the early game power. TL also attempted to bring the late game power with the Drow Ranger and Lone Druid, but Nigma countered with a Spirit Breaker/Anti-Mage duo that threatened to scale out of control.

As the match started, TL seemed to finally have the answer for this matchup, with some hard lockdown from the Mars and Shaker. But, once again, Nigma lineup proved too much. Their carries played out of their mind, out-scaling TL massively. Amer “Miracle-” Al-Barkawi on Anti-Mage was the star of this match, allowing W33 a slight break from carrying his team, as Nigma take the series to match point.

Looking to close things out, Nigma opted for a Wraith King/Phantom Assassin combo for their carries, and of course, the KuroKy Clinkz. TL, on the other hand, broke out the desperation Riki to grab a win. The diminutive assassin managed to give Liquid a more competitive laning phase, facilitating a number of dives.

But dives or not, Nigma were once again scaling into another monstrous late-game composition. The TA and Batrider combo chased down and killed TL, and rapidly snowballed into a 3-1 victory for Nigma.

With this victory we take the EU Final and we’re moving up to face @HELLRAISERSgg tomorrow at 16:00 CET in the EU Vs CIS Final in the WeSave! Charity Play tournament.

Nigma has once again impressed with their tournament performance, this time drafting completely differently to almost every other team in this event. What’s more, with these unorthodox drafts, they managed to win convincingly over a dangerous Team Liquid roster. It will be exciting to see what this stack can achieve at the upcoming ESL One Los Angeles 2020 ONLINE event. But before that, we’ll see Nigma face off against HellRaisers in the EU versus CIS finals on Thursday.