Nigma Pushed to the Limit at OGA Dota Pit Season 2 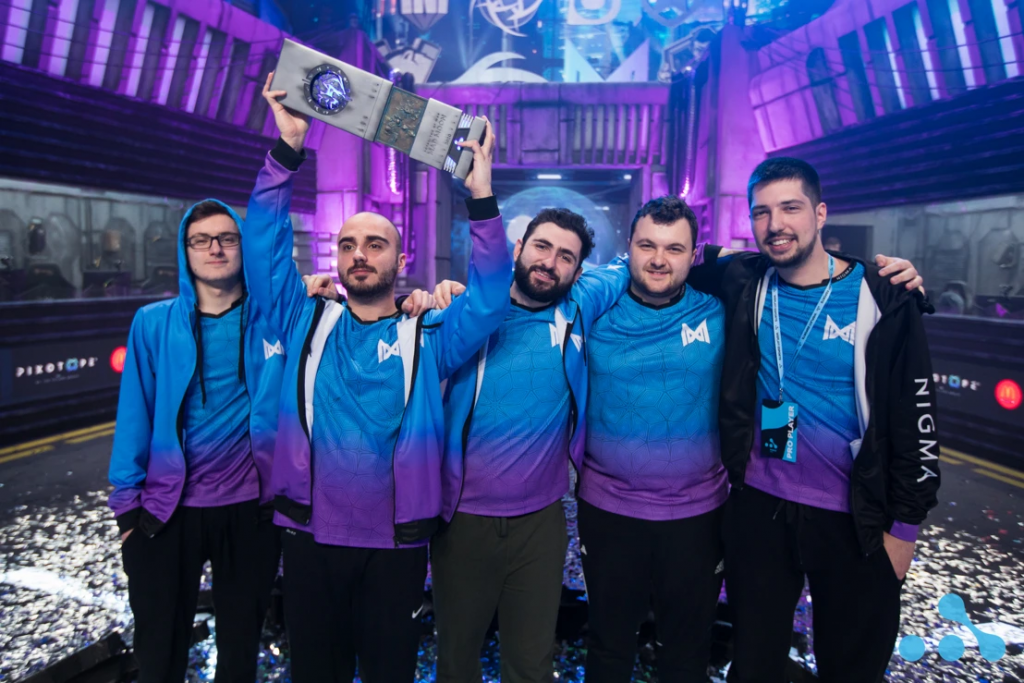 Team Nigma has defeated seven other hopefuls to be crowned the champions of the OGA Dota Pit Season 2: Europe CIS online tournament. The win comes after a near-undefeated run through the event that saw Nigma drop just one game on their way to the finals.

In the Grand Finals, Nigma clashed with Alliance, who they’d bulldozed through on their way to victory. Clashing again, the result was much of the same. But despite this incredible run through the bracket, it wasn’t a sure thing from the beginning. Several teams looked primed to challenge their run, as multiple squads remained undefeated until they reached Nigma in the bracket.

What’s more, Nigma did this with a stand-in at one of their most vital positions. Team captain and in-game leader Kuro “KuroKy” Salehi Takhasomi was unable to compete at this event. Instead, coach and former player Roman “rmN-” Paley was forced to stand in. Even so, the squad barely missed a beat, and it was hardly noticeable that KuroKy was absent at all. Nigma played so similarly to their existing style with their coach as a replacement that teams still had no answer for them.

Ultimately, there were really only three major competitors in this event: OG, Alliance and Team Nigma. The others just weren’t up to scratch. VP.Prodigy who’d looked so promising heading in floundered against inter regional rivals Natus Vincere. Ninjas in Pyjamas struggled with their stand-in, and Vikin.gg struggled to just stay connected with their final match of the series being played 4v5.

In fact the only team that really looked like they could have challenged the might of these top three teams was FlyToMoon. The CIS team came into the tournament with a lot of confidence, having publicly called out OG before the start of the event.

But that chip on their shoulder quickly fell as they dropped to the lower bracket. Turning things around, it was again OG who managed to end this promising team’s run, decisively beating them 2-0 in their rematch. This left just Alliance, Nigma and OG in the running for the final.

Unfortunatelly we stoped at this tournament today. GG WP @OGesports ! We took 4th place and gonna back soon .
Thanks you all for support !❤️🚀 Especcialy wanna say thanks to @OGADotaPIT fot this amazing short tournament! pic.twitter.com/iRgaaczD7Q

Alliance with a Chance

Initially it seemed like we’d be in for a TI9 rematch, as OG crushed Alliance in their first matchup. The team were styling on Alliance by 20 minutes, in a scene oddly reminiscent of all of OG’s other matches this tournament. The squad were able to capitalize on the large lead that Topias Miikka “Topson” Taavitsainen was able to get on his signature Monkey King pick to lead their way to a very one-sided victory.

First blood & 4 runes! Think we can all agree that this is dream start!🤩#LongLiveAlliance #OGAPITS2 pic.twitter.com/H5dSz3CSqu

But Alliance fared much better in game two better, as Linus “Limmp” Blomdin could actually play the game, thanks to his Dragon Knight pick. Against Topson’s Tiny, the hero could contest farm, and remain in the game, and in order to protect their mid, OG was forced to give Nikolay “Nikobaby” Nikolov a free lane. As a result, the star carry could dominate on his Morphling.

The Niko domination would become a theme in this series, as he was afforded his favored Faceless Void pick for game three. Allowed on one of his strongest heroes, it was really his match to win, and the carry stepped up and stomped OG in remarkable style. Accompanied again by Limmp’s DK, the one-two combo of a hyper fed side laner and a snowballing mid secured OG’s elimination. Alliance would head to the grand final to face Team Nigma.

Today Alliance was the better team.

Headed into the first game, Alliance desperately hoped for the same good start they had in their first meeting with Team Nigma. As a result, they attempted to focus on Aliwi “w33” Omar, preventing his snowball on the Visage. However, this just allowed the remainder of Nigma’s carries to pop off, with Ivan Borislavov “MinD_ContRoL” Ivanov scaling on his Dark Seer, while Amer “Miracle-” Al-Barkawi farmed up on his Faceless Void.

The lack of the Void on the side of Alliance was also keenly felt, as Nikobaby had used the hero so effectively in their previous matchup. Despite one questionable decision lategame, Nigma played things safe as the match closed, and wrapped things up with a game one win.

Luckily for Alliance, the second game had a much better start, with the squad grabbing multiple kills early. However, Alliance just couldn’t deal with rmN-‘s Warlock, with the deadly Tethers causing havoc in both team fights and lane. Despite initially looking good, Alliance were unable to get Nikobaby online, as Maroun “GH” Merhej on his Rubick were just far too strong, with the support finishing the game with an incredible 3/0/22 score.

In what would be the final game, Nigma had a very similar draft Nigma, apart from the crazy Jakiro pick into Templar Assassin. The pick force TA to try and mitigate magic damage against the high-utility hero, and as a result preventing the carry from coming online. This would prove fatal for the team as they didn’t have anything that could support Niko in the side lane. As a result, Nigma was able to take a win in this game, and with it the tournament.

But after a brief pause, Nigma seemed to lose momentum. A well-timed team fight saw Nigma’s Aegis fall off just as the skirmish started, resulting in several deaths, and a huge swing of gold back to Alliance. From there, throw after throw by Nigma presented Alliance with the perfect chance to come back, and eventually Limmp was just too strong for Nigma to deal with.

The throw clearly affected Team Nigma, who looked very out of sorts for the next game. They allowed Limmp again to farm for free. On a deadly Death Prophet pick, Alliance’s mid lanerwere able to crush Nigma as they again attempted to play around W33 and his usually dominant carry performances. After a scrappy match that saw the Batrider killed 10 times and make little impact, Alliance capped off Gustav “s4” Magnusson’s 2000th career game with a win.

.@theAllianceGG bring this one back from the brink! They get another win and tie the series with 2:2!

In game #4 of the @OGADotaPIT finals, @s4dota played his 2000th professional game of Dota 2.

He's the 5th player to reach this milestone, and has the highest winrate of that elite club.

(screenshot as of the start of the 1999th game) pic.twitter.com/BkhjshdaQ6

Game four was Alliance’s time to make a stand. After a strong laning phase that saw Nikobaby and Limmp grab a quick lead, Alliance pushed into Dire territory and began to take towers.But somehow, Nigma held on, and slowly the tide began to turn. After a crucial fight at the 34-minute mark Nigma finally had a gold advantage for almost the first time in the entire match. Perhaps it was the fact Alliance had been playing for almost eight hours straight, or just their luck finally ran out, but after that the squad collapsed. As a result, Nigma were able to take a win in this game, and with it, the tournament.

Nigma takes home the gold and with it, a healthy $70,873 prize. Alliance also takes home a not-too-shabby $36,822 for second place. The big takeaway from this event is that Nigma look dominant, but OG and Alliance have made huge steps in improvement. Last time we saw both of the latter teams, they were struggling with roster synergy. For Alliance, they’ve sured up their roster who look to be working like a well-oiled machine together (at least when they’re not playing Nigma). OG on the other hand have returned to a great form thanks to the return of Ceb. It will be incredibly exciting to see how much more these teams can develop as they head into the upcoming OMEGA League.