Nigma Overcome Both EU and CIS at WeSave! Finals 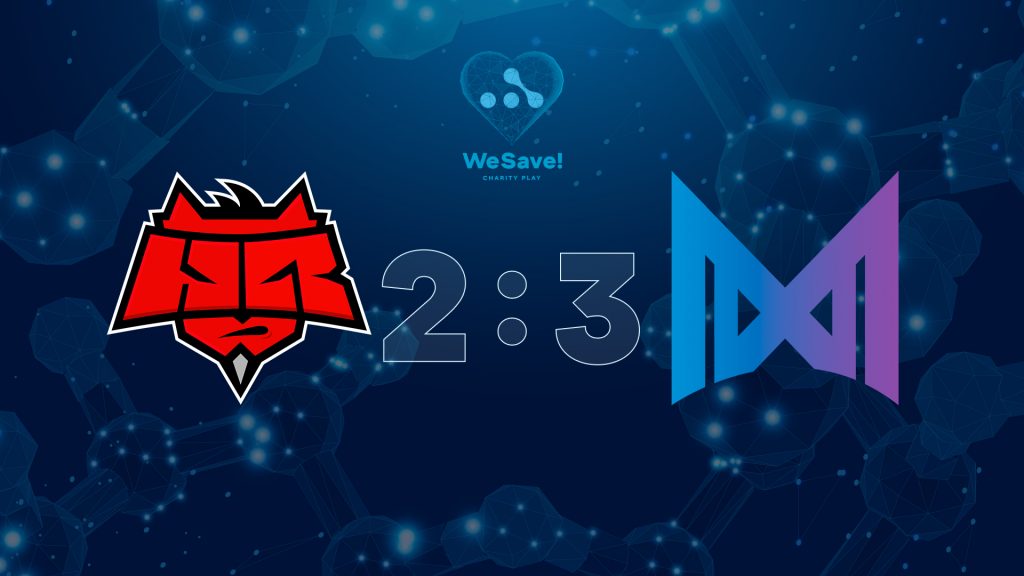 Nigma tried to cheese their opponent’s with alternative and unorthodox picks, and it almost cost them the series. (Photo courtesy WePlay!)

Nigma have defeated HellRaisers in the Grand Finals of WeSave! Charity Play in a thrilling five game series to prove the superiority of the European region. In a series that pushed both teams to the limit, Nigma managed to hold out and defeat their opponents with the sheer power of their carries.

Starting off the series, Nigma tried something slightly unorthodox by putting Kuro “KuroKy” Salehi Takhasomi on Bounty Hunter. Tri-laning with his carries, the team captain allowed Ivan Borislavov “MinD_ContRoL” Ivanov on Slardar to farm up solo in the bot lane. However, even with Bounty Hunter being a nuisance, and sniping couriers, HellRaisers’ coordinated aggression, and punishment of map movement helped them secure a lead.

In this first match, HellRaisers punished Nigma for every move they took, humbling the European stack in a way we just haven’t seen yet in this event. This was best shown by the humiliating cliffing that happened to KuroKy

Nigma held on and waited for the most potent part of their draft to come online, and eventually they managed to start winning fights. Finally, it was Nigma’s time to capitalize on mistakes, and they jumped on an out of position HellRaisers team to take back momentum.

After dominating almost the entire match, it was heartbreaking to see HellRaisers lose, but it was a very good foundation to build on for the next game.

Perhaps spooked by the almost loss, Nigma went back to the Clinkz and Silencer hype that they’d found themselves on yesterday against Team Liquid. But HellRaisers managed to get off to another impressive start with their four-position Bat Rider grabbing lots of early kills. Miracle took back the momentum momentarily for Nigma by getting two big early kills in the bottom lane, but ultimately it wasn’t enough to swing the lane.

As a result, Nigma had a lot of momentum heading into the mid-game. However, HellRaiser’s Alchemist was able to slowly farm up, as his teammates forced fights inside Nigma’s jungle, creating a lot of space for farm. What’s more, the Riki was scaling into a bit of a monster. As a result, HellRaisers were able to begin punishing Nigma across the map.

With their now hyper-fed carries, HellRaisers easily dismantled Nigma for the rest of the game, taking every objective they wanted, and equaling up the series 1-1.

After a brief break in which WePlay! revealed their new online league, Nigma started off this third game with some early engagements, trying to counter the aggression of HellRaisers. But Nigma started getting hammered by the stronger crowd control of the Chen, Mars, and Monkey King. As the match progressed, impatience and careless play from Nigma, who were perhaps not used to being so behind, resulted in a massive lead for HR. In multiple fights, the CIS team bested Nigma in decisive fashion.

Every fight seemed to go HR’s way, even if Nigma had the chance to choose exactly how and when the engagement happened. With no chance of winning fights, and a hyper fed Queen of Pain and Monkey King, HellRaisers took the lead in the series.

With their backs against the wall, it was Meepo time for Nigma. Taking advantage of their well-practiced timings, the European team were able to strike against HellRaisers at exactly the moment’s they were strongest. What’s more, the Meepo scaled out of control, and eventually Aliwi “w33” Omar was able to wrap things up with one of his signature picks.

In the final match, HellRaisers were not willing to give up this chance for a huge upset. They  hunkered down on their previous draft and attempted to try and replicate the early success of the last game, while banning Meepo. But instead of Meepo, Nigma just scaled up on Morphling, and with the unstoppable shapeshifter on lock, the European team claimed the

@TeamNigma have proven to be one of the strongest teams in the EU & CIS regions!

The lesson to take away from this event is that despite losing, HellRaisers looked incredible in this matchup, and in the upcoming ESL and WePlay! leagues they’re sure to impress. Meanwhile, Nigma, despite their top-level status, still have certain aspects of their play that are severely lacking. They’ll need to polish up their play before those same leagues begin.