Nigma Avoid Upset, HellRaisers Even Out Record at ESL One 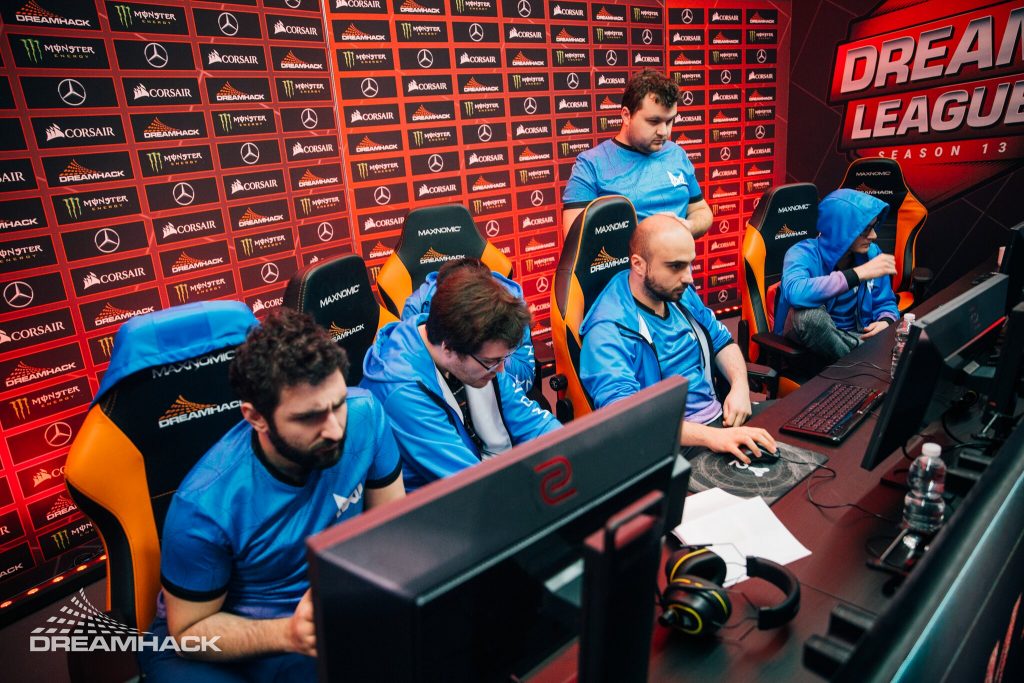 The online edition of ESL One Los Angeles continues with day three of the Europe/CIS division. The first two games saw HellRaisers take back the loss they suffered at the hands of Virtus.pro on Monday, and Team Nigma narrowly avoiding a massive upset in their match versus Cyber Legacy.

The HellRaisers Hold On

The first match of the day between HellRaisers and Vikin.gg did not go the full three-game distance, but the total time elapsed between both maps was quite substantial indeed—with the series clocking in at more than 100 minutes.

The first game was a strong showing from HellRaisers, who proved that they knew exactly how to keep their cool in such a competitive matchup. Their mid laner Arslan “xannii” Shandjanov was the star of the show, showing off Queen of Pain’s ganking prowess. Xannii coasted to a 10/2/4 scoreline and dealt over 35,000 points of damage to Vikin.gg’s heroes, putting almost his entire team on his back in the process.

That's a RAMPAGE on xannii's Queen of Pain! @HELLRAISERSgg are looking fantastic after that fight!

Later on in the game, he was even able to score a rampage, cleaning up Vikin.gg’s entire lineup in a perfectly executed defense of their top lane barracks. Indeed, their draft was very well suited to playing on their own high ground, and xannii made sure to take full advantage. Such a huge loss broke Vikin.gg’s backs, as the gold advantage swung immediately in favor of their opponents.

It took HellRaisers less than ten minutes after their successful defense to close out the game, by slamming Vikin.gg into the ground with some more well-executed teamfighting. With their buybacks expended and all but one of HellRaisers’ heroes still alive, Vikin.gg simply could not withstand more.

Game two, on the other hand, was a pure thriller. Although the game was relatively even for the first 40 minutes with both teams trading kills and teamfight wins throughout, it was the two for five trade that HellRaisers took around the 43 minute mark that gave them a huge advantage in the deep late game.

But Vikin.gg refused to give up, and despite losing four lives plus a buyback from Miroslav “BOOM” Bičan as Queen of Pain, they were able to momentarily stop the bleeding by killing both of HellRaisers’ primary cores. In fact, they gained a whopping 2,300 gold out of taking Alexander “Nix” Levin’s head, whose Morphling was extremely farmed and had a massive killstreak to his name.

The game continued on for another 27 minutes, with neither side willing to commit much in fear of making a game-losing mistake. That is, until the unexpected happened: a base race between both teams. With two of their heroes down without buyback, Vikin.gg realized that their only hope was a Hail Mary attempt at the HellRaisers’ ancient.

Both BOOM and Melchior “Seleri” Hillenkamp, Necronomicons and Book of the Dead in hand, TPed to the creep wave that was sieging the Dire ancient and launched their desperation attack. Alas, it was not meant to be, as HellRaisers outran Vikin.gg’s damage by virtue of their numbers advantage.

Nigma in a Nailbiter

International 7 champions Team Nigma played the second match of the day, and were no doubt looking for redemption after the thrashing they took from OG on Monday. And that is indeed what they were able to do versus Cyber Legacy—though they definitely struggled to put them away in the three-game series.

The first map looked like business as usual for Nigma. They drafted a supremely synergistic lineup focused on empowering Amer “Miracle-” Al-Barkawi’s Ember Spirit—by providing him with movement speed through Ivan “MinD_ControL” Ivanov’s Dark Seer, as well as mana and cooldown reduction through Kuro “KuroKy” Salehi Takhasomi’s Keeper of the Light.

The strategy worked immensely well. Miracle- was a speedy, oppressive force throughout the entire game, able to do as he pleased and as often as he wanted thanks to the cooldown reduction from Chakra Magic. And like xannii before him, Miracle- also came away with a rampage, shredding Cyber Legacy’s heroes to pieces with ease.

The game was pretty much over by the 20 minute mark, and it only lasted for another 12 and a half minutes from there due to some grave mistakes from Nigma leading to a teamfight loss.

Cyber Legacy then showed signs of life in the second game, by drafting a teamfight-heavy lineup that allowed them to impose their will early and often. Their stand-in offlaner Oleg “LastHero” Demidovich was the undeniable MVP of the game, after an incredible start as Centaur Warrunner allowed him to get a 15 minute Blink Dagger. Fueled by the blazing fast timing, LastHero enabled his team to fight whenever they wanted to, which was important to their success as they did not have a late game carry unlike Nigma.

Wow, these fights between @TeamNigma and @cyblegacy are something else!

Both teams are even on networth, so who's gonna win it? 🤔#ESLOne
📺 https://t.co/RUTJQiyOsP pic.twitter.com/RPqwG3bjeT

Cyber Legacy continued to push the tempo and extend their advantage in the mid game, taking splendid teamfights and making all the right decisions on their way to victory. The score was even, and suddenly Nigma found themselves facing a worthy opponent.

The third game was what truly made the series closer than anyone could have expected. Cyber Legacy got off to a good start in the laning phase, drawing even in their matchups at worst. LastHero  was once again the champion of the early game as Axe, winning his lane against MinD_ControL’s Void Spirit and KuroKy’s Keeper of the Light.

The control that he was able to exert upon Aliwi “w33” Omar’s Outworld Devourer and Miracle-’s Riki throughout the game could not be overstated. Chasing them down to ensure that they could not escape, LastHero was able to get several key pickoffs allowing his team to run rampant. Meanwhile, the armor reduction from Yaroslav “Pikachu” Vasylenko’s Dazzle helped Nikita “Palantimos” Grinkevich deal tons of physical damage to Nigma’s lineup as Spectre.

🔥 @cyblegacy are going HAM! 🔥
They completely wipe @TeamNigma and look like they may have this game in the bag! #ESLOne
📺 https://t.co/RUTJQihdBh pic.twitter.com/4OTuoaVZoU

With their teamfighting on point, Cyber Legacy were able to stay relatively even with Nigma in terms of net worth, despite losing five lives in exchange for just one in the waning minutes of the early game. Through the mid game, they were able to find their spots well, controlling huge areas of the battlefield with the Supernova from Danil “Bignum” Shehovtsov’s Phoenix dealing large amounts of magic damage with the Chain Frost coming from Sergey “HappyDyurara” Horonzhiy’s Lich.

In fact, their dazzling coordination even made it seem like they had the game locked down at one point after wiping Nigma in the late game, losing only HappyDyurara in the scuffle. The upset was ripe for the taking—but KuroKy and the rest of Nigma held on for just a little too long.

After baiting the Berserker’s Call from LastHero with an illusion in the guise of w33’s Outworld Devourer, Nigma pounced on the opportunity, with Miracle- getting the jump on Bignum in order to silence him instantly with his Smoke Bomb. Unable to utilize his Aghanim’s Scepter-upgraded Supernova, Bignum was taken out of the picture shortly after, forcing him to buyback into a fight that he was so far away from.

From there, it was just a matter of time until Nigma’s cores cleaned up the rest. As it turned out, Cyber Legacy had no more buybacks to work with, and so they had no choice but to give up a heartbreaking loss after such a valiant effort.