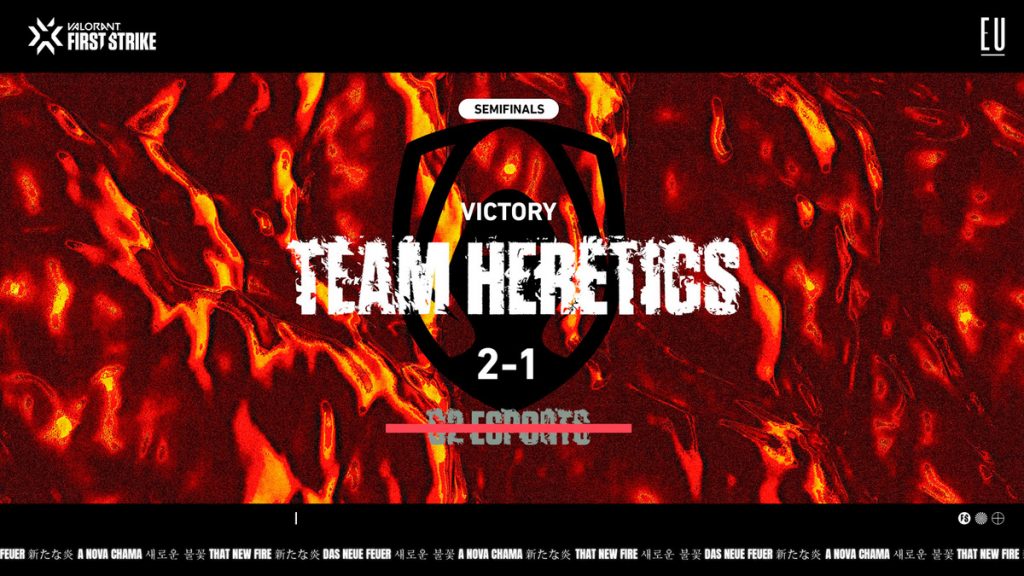 Through the fire and the flames, Heretics carry on. (Photo courtesy Riot Games)

After their shocking upset victory over G2 Esports in a grueling back-and-forth series that went to three maps, Team Heretics’ Dustyn “niesoW” Durnas sat down with Hotspawn Esports to discuss how satisfied they already are with their performance, what they still need to work on, and who on the team is key to keeping the players calm and collected.

Hotspawn: First of all I want to thank you for joining me, and congratulations on a massive victory.

Hotspawn: Two series going to three, two wins over the biggest names in EU VALORANT right now, and a trip to the grand finals. Regardless of tomorrow’s outcome, what does this mean for the team?

niesoW: We already won. We beat Liquid, we beat G2. Now the team has really boosted confidence, and we’re looking forward to the grand finals.

We are in the Europe #FirstStrike finals.

Hotspawn: I spoke to some of your teammates on Thursday. AvovA talked about how tired he was after the series and nukkye said his heart rate was still crazy high afterwards. What’s your mindset right now?

niesoW: A little bit of both; I’m still shaking but I’m fucking exhausted. It was such a close game. What can I say?

Hotspawn: On day one you withstood a huge performance from a team’s star against ScreaM for Team Liquid. Today you went up against a terrific all-around in G2. How does your approach change when you don’t have to worry so much about one particular player?

niesoW: They’ve been playing a long time together. They have a lot of good team plays, so we prepared for that stuff. We kind of knew how they played, but in the end we just played our game. It doesn’t matter who we play.

Hotspawn: Please tell me about your approach to Ascent. This was a favorite of G2’s, this was their map pick, it was a map you lost on Thursday and you guys went 10/11 on attacking rounds to steal it from them. What was the biggest difference between your Ascent vs Liquid and your performance vs G2? Was switching out Raze for Jett part of the plan?

niesoW: We played with more intensity and we took it more seriously. [Switching out for Jett] wasn’t something we planned. We said “let’s just do it.”

Hotspawn: This was two series in a row that went to map three, and according to your match history, these were the first series of yours to go to three. How important is that experience to the team going forward?

niesoW: It gave us a lot of good practice; it’s good that we played all the maps and played lots of rounds. We’ll be more prepared for the grand finals.

Hotspawn: Tied at halftime in map three of a semifinal. What do you do individually and as a team to stay cool?

niesoW: Good question. It’s the experience of loWel and nukkye that calms us down. They’ve played a lot of tournaments and have good experience.

Hotspawn: What would you say was the most important thing you learned from the series, either about playing G2 or about yourselves as a whole?

niesoW: There was some not-so-good communication; we failed in some rounds we could’ve won to make it easier for us. But we’ll talk about it and try to fix it. It’s not going to get fixed in one or two days, it’s gonna take some time, [like] a few months or half a year.