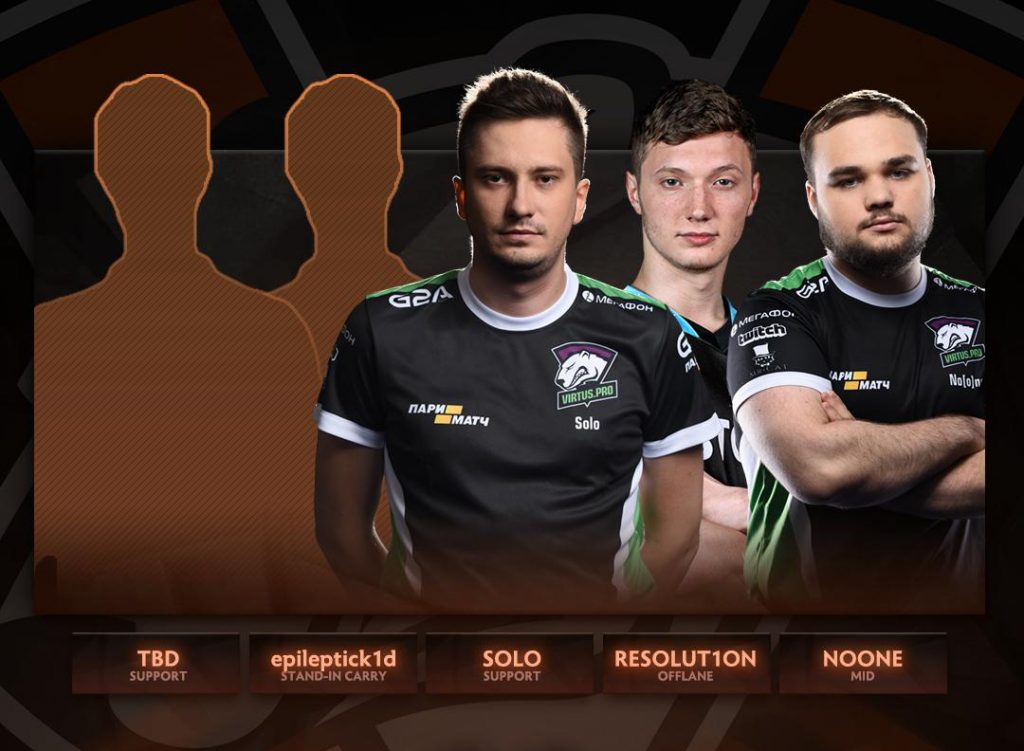 The roster shuffle continues, as J.Storm and Virtus.Pro announce a trade and new lineups (Image via @wykrhm on Twitter)

Pro Dota 2’s brief break in action may almost be over, with big events like ESL One Hamburg and the start of the Dota 2 Pro Circuit on the horizon, but the roster shuffling doesn’t look like it’s slowing down. Today, two major teams announced their newest rosters, with J.Storm and Virtus.pro breaking the news just minutes apart.

We have some big news! #GOGOVP

– We are welcoming @Resolut1on_ as our new offlaner
– We’ll play in MDL Chengdu Major qualifiers
– epileptick1d will stand in during qualifiers as a carry
– @rodjerdota leaves the team pic.twitter.com/FxIafbuP7e

First off was Virtus.pro. In a tweet and accompanying post on their website, the organization announced it’s official roster for the qualifiers of MDL Chengdu, the DPC season’s first Major. Notably, the team announced the departure of veteran support player Vladimir “RodjER” Nikogosyan and the addition of Roman “Resolut1on” Fominok, previously of J.Storm.

Resolut1on had most recently played with J.Storm during WePlay! Reshuffle Madness 2019, which concludes today. However, the squad fell short of their expected spot in the finals, losing out to CIS team, and finalists, Positive Guys. His departure from that team, and move to Virtus.Pro was announced just 24 hours after the team’s elimination. For the qualifiers, Dota steamer epileptick1d will act as stand in the carry position for Virtus.Pro, with a fourth player to be announced at a later date.

We would like to welcome @braxlikesdota to the team on trial, while @MooDota2 moves back to carry.

Following the announcement of Resolut1on’s departure, J.Storm revealed their new roster. They welcomed Braxton “Brax” Paulson, most recently of a now-disbanded beastcoast lineup, to the fold. The roster shuffle also sees David “Moo” Hill move back to the one position carry role after last season saw him play in the three position. J.Storm has been tinkering with this lineup in both WePlay! Reshuffle Madness and BETWAY Midas Mode 2.0 tournaments.

In a statement on the Resolut1on move to VP and J.Storm’s new roster, General Manager, Chandler Dent, had this to say. “We’d like to thank Reso for his hard work through the later portions of last season, as well as his professionalism over the past few days while talks have taken place. We’re sad to see him go on late notice, but we respected his wishes in wanting to join VP. We wish him the best of luck this season.”

The latest challenge for J.Storm’s new lineup will be at the ESL One Hamburg 2019 North America Qualifiers, where the team will face one of the only stacks to have given them trouble at Midas Mode 2.0, the Fighting Pepegas. Full details of the new roster and Resolut1on’s departure are available on J.Storm’s website. Additional info on Virtus.pro’s lineup can be found in their latest blog post.