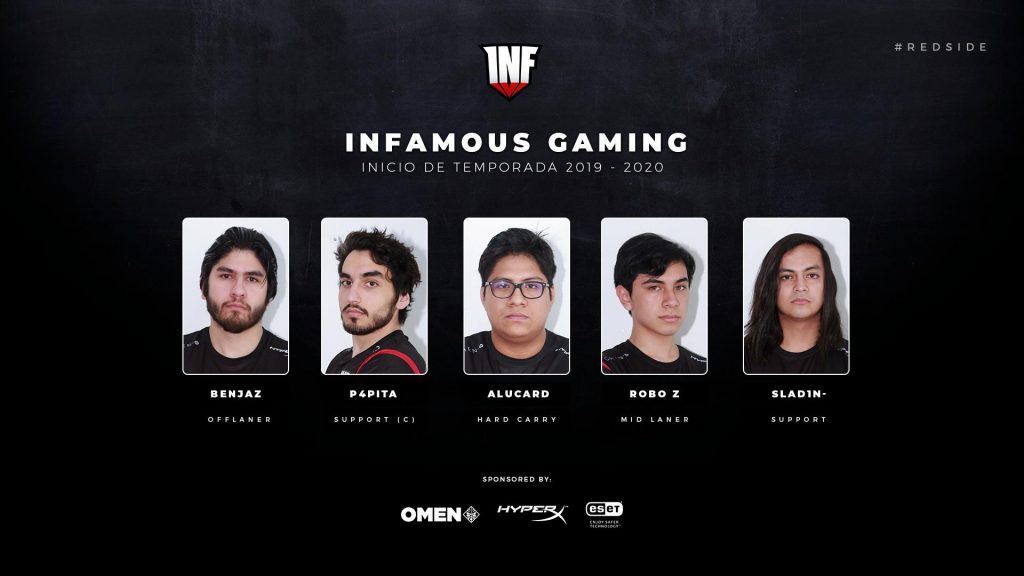 After a turbulent second season in the Dota 2 Pro Circuit, Infamous Gaming looks to season three with an entirely new roster.

Infamous announced its new squad today. The team will include:

Papita and Benjaz may be familiar to readers. Both have played for Infamous previously, and have been active in the top tier of South American Dota 2 for multiple years. Robo-Z is also an Infamous alumnus, having played for the team for two months in early 2019.

We end 1-1 against EgoBoys in the Movistar Liga Pro Gaming. Thanks everyone who supported us on the stream. Let's go Infamous! #RedSide pic.twitter.com/dQKVqwvPEW

The new roster split their first series, in Movistar Liga Pro Gaming Season 1, versus Egoboys, going 1-1 in the match. They’re scheduled to play Gorillaz-Pride next on September 17.

Infamous has previously fielded a different roster at The International 2019. That squad, formerly known as Team Anvorgesa, was picked up in July and departed the organization in late August. They placed seventh-eighth at TI9. It was the best-ever result for a South American team at The International, and has drawn more attention to the competitive viability of teams from the region.

Prior to that, Infamous’ roster featured Papita alongside an assortment of European players, some of whom had been based in South American for multiple months at the time.

Infamous has completed registration with the DPC site, ensuring their eligibility for the first qualifier of the season. The first Regional Qualifier will take place beginning October 5, as per Valve’s recent adjustment to the schedule.