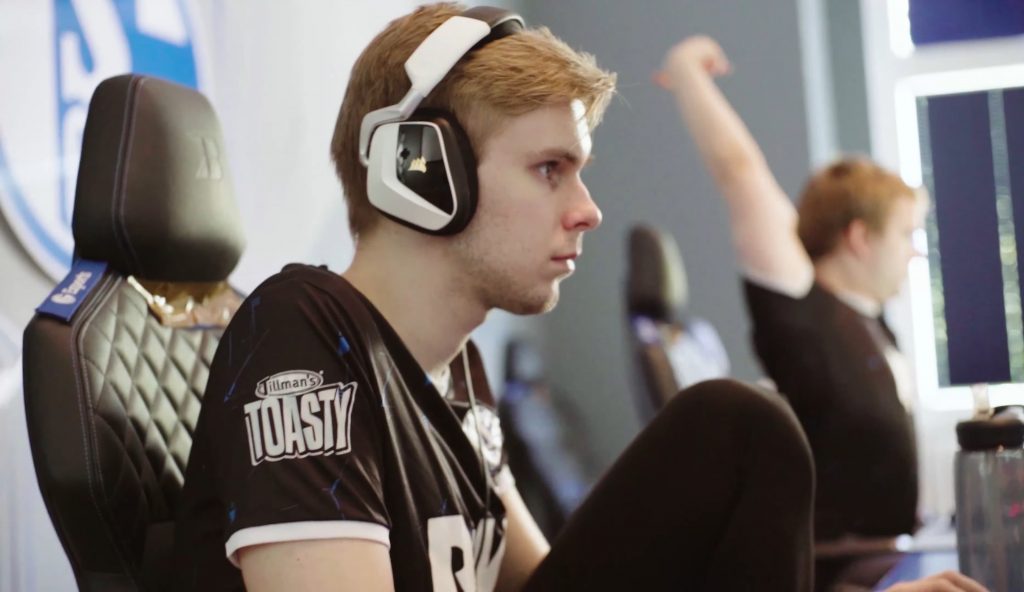 Neon is one step away from making it to Worlds with Schalke 04. (Photo courtesy Schalke 04)

The dream lives on for Schalke 04 in the LEC. After five weeks of disaster in the regular Summer Split, the team saw the light and went on an absolute tear. What started as a roughly 4% chance to still make it to the Playoffs stage turned into 100% excitement when, at the end of the final week, they had secured their spot. The Schalke 04 Miracle Run continued last weekend, when the team convincingly beat SK Gaming and advanced in the lower bracket. Now, only one best-of-five separates Schalke 04 from the League of Legends World Championship.

Hotspawn: Welcome Neon! Before we talk about the Playoffs itself, I want to hear from you what went through your head as soon as you realized you had actually completed the Schalke Miracle Run, and qualified for the Playoffs.

Neon: When we made it to the Playoffs, we were all in a kind of shock. None of us had even remotely expected us to actually make it. Okay, maybe Gilius did, but no one else actually believed in it. When we made it, everyone realized that, since four teams go to Worlds for Europe this year, making it to Worlds was only two best-of-fives away. And now it’s only one away for us. Once everyone realized this, we were all able to put in even more effort than we were putting in already. We’re unleashed right now.

Hotspawn: When did you get the feeling that making it to the Playoffs was actually possible?

Neon: *laughs* I guess during the last week, the ‘super week’, when we had to win all three matches and some other matches had to go in our way for us to make it. I would say that I started believing after the first win. Then I realized that we could actually make something unreal happen. But I don’t think I still fully realized what we managed to do.

Hotspawn: Knowing that your next opponent would be SK Gaming in the Playoffs, how did you approach the preparation? You had some extra time, after all.

Neon: Well, we looked at SK’s previous games and it is pretty obvious that this team only plays towards their bot lane. Going into this week, we didn’t expect Senna to be left open. You don’t need to do anything and it will always be super relevant in the game and super overpowered. We were kind of surprised when they left it open all three games. Since we had Senna, it allowed us to play a bit of a different style compared to SK Gaming. I thought the games were won from the draft because our drafts were just so much better in this series. I think we were more confident and actually better than SK coming into the Playoffs, hence the quick 3-0 against them.

Hotspawn: How did the fact that the Playoffs are being played on a different patch than the regular season affect your preparation? Was it difficult for you to scout the meta?

Neon: Pretty much since the last patch—correct me if I’m wrong—the only thing that changed was that Lucian got a buff. There were some support nerfs as well, like slightly, but it was pretty much still the same. We knew exactly what kind of champions Crownshot would look to pick. Honestly, we had some different scenarios prepared too, but I think they handed us the best scenario. It made it really hard for them to actually get what they want. It made it hard for them to play towards their win condition.

Hotspawn: One of Crownshot’s strongest and most-picked champions overall is the Ezreal, and you let him play that during the series. Were you that confident in being able to shut him down?

Neon: Oh yeah, absolutely. Crownshot’s Ezreal, or whatever champion for that matter, is just a champion. He might be good at it, he might not. Obviously, being afraid of a certain player’s champion is kind of the wrong mindset to have. The champion can only do as much as the game allows the champion to do. If you’re losing to the champ, that just means you’re playing badly. So Crownshot’s Ezreal doesn’t really matter. The only thing that we were actually slightly afraid of would be Twitch, since no one actually plays this champion and it is quite a unique one. The amount of practice we got against Twitch was very limited, so that would be the only x-factor that we could have faced in this series. Be it Ezreal or not, Crownshot didn’t really have the best performance that game. But I think it was the best draft they could have gotten.

Hotspawn: Are you then not a believer in something like ‘target bans’?

Neon: I mean, it depends on each individual player. Some players are very well-known for some of their champions. Their performance on that champion is just on a different level. Some people statistically have an insane win rate on one champion and a low win rate on others. That’s an indicator that you can actually draft towards banning specifically for that player. But we didn’t really feel like this was necessarily the case with Crownshot. I still don’t feel like I would do it a lot. Even against Teddy, I would still leave Ezreal open. I believe that we had the correct answer to it.

There are teams in the LEC right now that benefit from the online environment a bit more than others.

Hotspawn: You spoke about the strategic aspect of preparing for the Playoffs, but I also want to hear how you mentally prepared for the series. How was it for you to get ready for a series that carried such a lot of weight?

Neon: I knew that it would be a high-pressure situation. It is my first best-of-five on the LEC stage. I knew that the stakes would be huge, and that the expectations were even bigger. I was actually really nervous against SK Gaming, but only before the first game. After the first game, it kind of went away. The way I prepared was by looking at my opponents, looking at their games, and looking at their solo queue accounts. I tried to think of the best answers I could have against them. I just went into this week with a straightforward mentality. I set a few personal goals I wanted to accomplish to be in a good position for the match and be in good shape. It went well for me, and that’s why I was able to play like I did against SK.

Hotspawn: You are on a team with people who have more best-of-five experience on the LEC stage. Do you ever talk about preparing for such matches together?

Neon: Everybody does their own, personal preparation. I don’t know how other people deal with a best-of-five. But I think that next time I’m gonna be more calm coming into the series. It’s still the same game that we play multiple games of every day. Once I realize that, on that day, that it’s the same game and that nothing has changed, and that it’s just like practice, then the nerves go away and I’m focused on the match.

Hotspawn: Is it easier for you to focus with the Playoffs being played online, you think?

Neon: Eh, possible. It could be. But I can’t really compare it, since this year I didn’t really play on a stage yet. It’s hard for me to compare. The last time I played on the stage was a long time ago, like a year ago. So it might have changed since then. I would say that there are teams in the LEC right now that benefit from the online environment a bit more than others.

If we make it to Worlds, I’ll actually start to believe in miracles

Hotspawn: Looking ahead at the rest of the Playoffs, let’s talk about the teams still in the running. Are you convinced that these five teams are the best teams in the LEC?

Neon: Yeah, for sure.

Hotspawn: You’ve made it to the next round, and this time your ticket to Worlds is on the line. What will the next week look like for you in terms of preparation?

Neon: Well, first we need to know who we’ll be playing against. Once we know that, I’m again just going to try and learn as much as I can about my opponent. I’ll adjust my practice towards them. There’s only going to be a limited amount of practice this week. It’s one week this time. Before the first round, we had two weeks of preparation time. We need to make sure that no practice is wasted, and that we have the best practice we can get since day one of the scrims this week. With practice, confidence and God Gilius’ blessing we can look to continue the ten-game win streak. If we make it to Worlds, I’ll actually start to believe in miracles I guess.