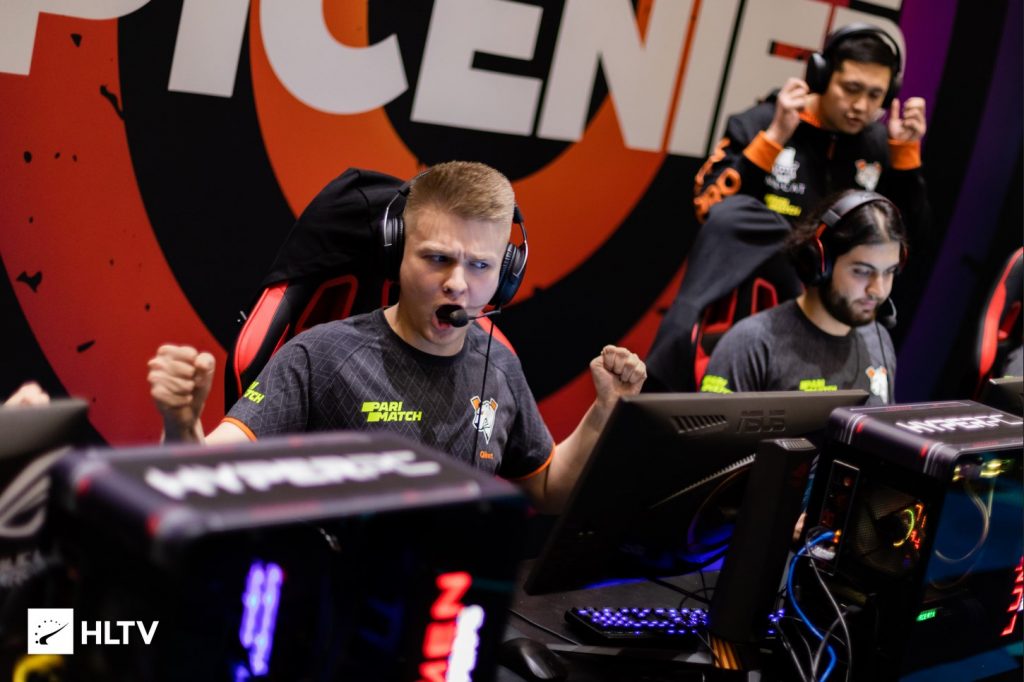 Virtus.pro had taken first seed in a group with Na’Vi without having to play them. (Photo courtesy HLTV)

WePlay! Clutch Island, the CIS region’s second RMR event for major qualification, has reached its climax. The twelve teams who entered the ring have been thinned to just four. Stage 3 was a bracket based, two-group format which saw Nemiga Gaming and Virtus.pro earn top seeds with 2-0 records. Team Spirit and Natus Vincere brought up the rear with 2-1 records.

Group A was headlined by Team Spirit, the winners of the previous RMR event at Road to Rio. Both their and Nemiga’s opening matches went as smoothly as they’d like with fairly decisive 2-0 results.

Spirit played ESPADA first, starting out on Nuke. Although their T side didn’t go spectacularly, the five rounds was enough to let their defense do its job. After losing the pistol round, Spirit won 11 of the next 13 rounds to earn a 16-13 win.

Next up was ESPADA’s Mirage pick. ESPADA got off to a good start on T side, but couldn’t maintain their 6-4 lead. A five round win streak by Spirit put them in the driver’s seat. They never lost the lead after that, taking control on the attacker’s side. Spirit closed out the map 16-11 to secure the 2-0 sweep.

Nemiga’s opponents were Winstrike Team. This match was essentially over before it started. On Winstrike’s Vertigo pick, they were shut down on T side then failed to stop Nemiga’s own offense.  The 16-7 finish led into an even more dominant performance on Mirage. The duo of Anton “speed4k” Titov and Igor “lollipop21k” Solodkov completely took over the game. They earned 42-20 and 44-24 K-D ratios respectively, dismantling Winstrike at every turn. A 16-6 thrashing easily put Nemiga through to the Winners’ Match.

Spirit versus Nemiga was a fairly standard affair between even teams. They both comfortably won their own map picks, 16-10 on Mirage for Nemiga and 16-4 on Dust2 for Spirit. After the aim-heavy maps, Nuke was the tiebreaker. Both teams struggled heavily on their offense. T side round wins were few and far between. Spirit only earned three on their attack and Nemiga had three going into round 30. A 3K from Aleksandr “mds” Rubets on a 4v5 retake defense was the difference maker.

Nemiga would take the 16-14 victory and first seed in playoffs, while Spirit had one more match ahead of them.

Luckily for Spirit, their opponents wouldn’t be up to the task. ESPADA had just come off of a very close 2-1 victory over Winstrike and now had to face down a team that already beat them. The damage was even greater this time, with Spirit taking 16-5 and 16-7 wins on Nuke and Overpass. Spirit easily claimed the final playoff spot from Group A.

Virtus.pro Run with It

In Group B, Na’Vi was the obvious favorites on paper. However, their previous failings at Road to Rio were present in the minds of everyone as they took the stage.

Almost like a curse, Na’Vi immediately struggled against Gambit Youngsters. An unexpected Overpass pick by Gambit.Y saw both teams take normal 9-6 CT halves. The narrative of overtime was Kirill “Boombl4” Mikhailov versus Timofey “interz” Yakushin. Both players led their teams in frags and made big plays to keep them in the game. In the end, it was interz with 30 kills who was the difference maker. Map one went to Gambit.Y 19-17.

Na’Vi did have a response on their Train pick. An above average 6-9 T side led into a very well executed defense. Despite dropping the second pistol round, Na’Vi turned around to win 10 of the next 12 rounds and take the 16-12 victory. The decider would be Dust2, another map with long sightlines. Unfortunately for Na’Vi this one would not go as smoothly.

All of Gambit.Y’s players were performing extremely well. They found many aim duels in both opening kills and late round clutches. Gambit.Y had a +5 first blood lead on Na’Vi giving them the advantage in many of the rounds. In the end, Na’Vi would fall 16-11 to Gambit.Y.

In the other opening match, Virtus.pro took a 2-1 win over Hard Legion. It was another very structured match with both teams winning their map picks. The real battle came on Inferno. Virtus.pro took a 9-6 first half, then won five in a row on the T side to go up 14-6. Then Hard Legion’s comeback began. Led by Igor “Forester” Bezotcheskiy, they took eight of the next nine rounds to bring the score to 14-15. Round 30 started out amazing for their defense, stopping VP at the base of B site. However, it was Dzhami “Jame” Ali’s time to shine. With an AWP 1v4, he was able to secure the 16-14 for VP in regulation.

Gambit Youngsters and Virtus.pro both worked very hard to make the Winners’ Match, but only one could take the easy path to playoffs. Although the final score was 2-1, Virtus.pro had this match in the bag. Gambit.Y’s Vertigo pick was their way of guaranteeing a map win. Their offense was well planned, leading to a 16-10 win. VP then struck back hard on Dust2. A 11-4 T side led into a near perfect defense, finalizing the score at 16-5.

The momentum from Dust2 carried over to Overpass. VP offense was fairly strong, earning a one round lead at the half. Their CT side was even stronger. They pulled off another dominant defense, only giving Gambit.Y a single round. The clean 16-8 result put VP through to playoffs.

Meanwhile, Na’Vi was giving Hard Legion the biggest beating of Stage 3, with 16-2 and 16-5 results. Gambit Youngsters would need to go through them again if they wanted to make playoffs. Gambit.Y’s Inferno T side earned a respectable nine rounds, but their CT performance couldn’t close out the map. Na’Vi responded with nine rounds of their own, forcing overtime. Starting on T side after winning nine of the last 11 in regulation proved to be a big advantage for Na’Vi. They confidently took a 19-16 win to steal Gambit.Y’s map.

Na’Vi now had their favorite Train pick ahead of them. Their proficiency on the map turned out to be too much to Gambit.Y to handle. Na’Vi took eleven rounds on offense before swapping sides. Gambit.Y was unable to replicate the success, leading to a 16-8 win for Na’Vi and the 2-0 revenge victory. Denis “electronic” Shapirov earned match MVP for his 47-36 K-D ratio and 82.2 ADR.

Now that Na’Vi has escaped the Group Stage, they will meet up against Nemiga Gaming in round one of playoffs. Ironically, Nemiga now have a harder match for themselves after beating out Spirit for first seed. The other match will be Spirit versus Virtus.pro. Three of the four highest rated CIS squads will be duking it out for the massive prize of 2000 RMR points starting on June 26th. This could be the difference between qualifying for the Rio Major as a Legend or as a Challenger, so the teams will need to bring their best.