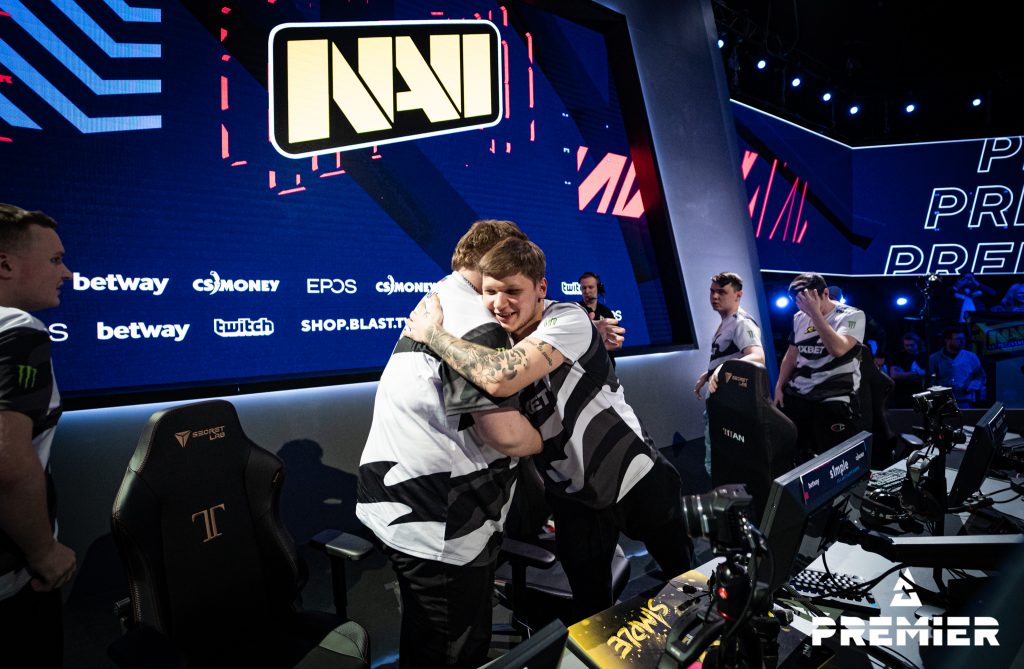 Na'Vi make it out of Group B to advance to BLAST Premier Spring Finals. (Photo courtesy BLAST)

The second week of the BLAST Premier had four of the best teams in the world compete against one another for a spot in the Spring Final. Astralis was the favorite to win in the group of death but was swiftly eliminated by the group underdog. Na’vi had to fight tooth and nail to make it through the weekend and ultimately emerged as the winner of Group B.

Vitality started off the weekend with a swift victory against Na’vi who could not keep up with the French powerhouse. Na’vi had a slight edge over Vitality as they had more recent competitive experience at ICE Challenge earlier in the week. Vitality had not played an official competitive match in over two months but were still able to dominate their opponent.

Vitality came out strong on Inferno and secured a five round winning streak. Natus Vincere’s in game leader Kirill “Boombl4” Mikhailov did not go down without a fight however and secured 23 kills and helped Na’Vi win seven rounds in the first half. Vitality still maintained a lead in the second half and achieved a 16-12 victory.

SO CLOSE TO THE ACE!@Boombl4CS is all alone against five, but still gets away with 3 frags 🔥🔥#BLASTPremier pic.twitter.com/Bdt8An7MQ4

Na’vi secured early rounds on Dust2 but ultimately fell short in the late game. The number one player in the world, Mathieu “ZywOo” Herbaut had a fantastic performance in the second half and helped secure a 16-19 and 2-0 victory for Vitality.

One of the biggest upsets in CS:GO history occurred when Complexity beat Astralis 2-0 in the second match of the weekend. Astralis is the number one team in the world and was predicted to beat Complexity with ease.

Complexity removed Astralis’s preferred map, Nuke, and selected Dust2 for the first game. Astralis started off with a five-round lead as expected, but Complexity did not give up. The 44th ranked team continued to score kills against Astralis and forced re-buys from the number one team. A 2v1 clutch from Owen “oBo” Schlatter completely destroyed the Astralis economy and helped turn the game around in Complexity’s favor.

The change in momentum allowed Complexity to secure nine more rounds in the first half. They continued their domination in the second half and secured a 16-11 victory against Astralis. Complexity would go on to beat Astralis 16-12 on Vertigo and secured an unexpected victory over the #1 team.

The Champion is Eliminated

Astralis faced Na’vi in the first match of day two and had a chance to redeem themselves. The champions could not recover, however.

The Danish team secured a victory over Na’vi on Train and seemed to be back in their groove. Na’Vi managed to regroup and secure a win on the second map Nuke thanks to a stellar performance by the Russian team.

The final game took place on Inferno and was a back and forth grudge match. Astralis secured an early lead that Na’Vi was able to recover from before the second half. The Danish team turned the tides and came out strong in the second half, but Na’vi was able to hold sites and secured a 16-14 over Astralis. The #1 team in the world will have another chance to make it to the Spring Final at BLAST Showdown. Hopefully the disappointing loss will be a wake-up call.

The underdog of Group B continued to surprise the competitive community by quickly eliminating Vitality in a 2-0 victory.

The underdogs of the group is the first team to qualify to the #BLASTPremier Spring Series from Group 2 with a 2-0 against @TeamVitality!#BLASTPremier pic.twitter.com/r4MWmExuiR

The win secured their spot in the Spring Final and allowed the team to continue to the group finals. Vitality was forced to compete against Na’Vi a second time for the second Spring Final slot and the Grand Finals of group B.

The rematch began with Na’Vi winning 16-12 on Inferno. Vitality secured a few rounds in the second half while Na’Vi struggled to maintain their momentum but could not secure a full comeback. Star players S1mlpe and Boombl4 came out strong in the early game on Dust2 and helped secure a 6-0 lead for Na’vi. Vitality responded by winning three late rounds of the first half but were not able to stop Na’vi’s great performance.

Natus Vincere secured a brutal victory in the second half with a 16-6 finish. Vitality will have another chance at the Spring Final in the BLAST showdown alongside Astralis.

The final match set Complexity against Na’vi who had both defeated every other team in the group.

Na’Vi achieved an easy victory on Train and secured a 16-10 win. Complexity was unable to regroup and ultimately fell short on Mirage where Na’vi achieved a 16-9 victory.

Complexity was unable to secure the Group B final victory, but still earned their spot in the Spring Final and defeated two of the best teams in the world. Na’Vi maintained their position as a top CS:GO team and will also continue to the Spring Final.

The BLAST Premier Group B was considered the group of death and was supposed to be an easy weekend for Astralis. Complexity proved they are not a team to ignore and eliminated some of the toughest competition in the world. Astralis and Vitality will have another shot at the Spring Final in the BLAST Showdown, so fans will have to wait and see if the best teams in the world can redeem themselves.

The Blast Premier will continue next week as four more teams will compete for a chance to advance to the Spring Final, while the other two teams will move on to the Spring Showdown. Group C consists of 100 Thieves, Evil Geniuses, G2, and OG.