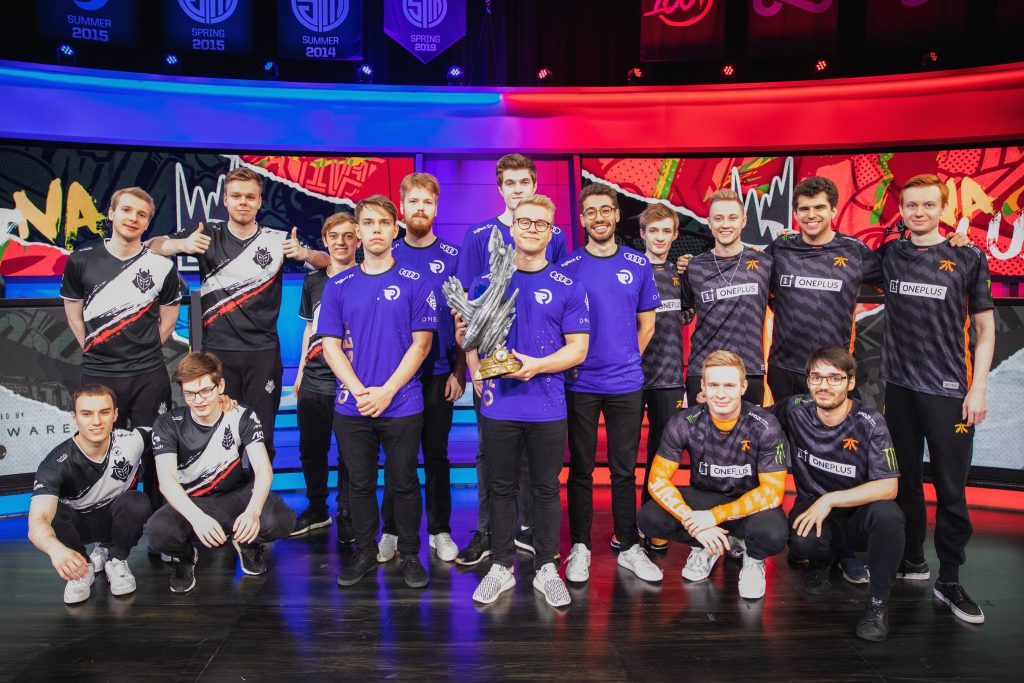 The League of Legends European Champions (LEC) dominated the LoL Championship Series (LCS) three games to one at Rift Rivals 2019 to confirm that Europe is still greater than North America. The LEC won the Group Stage 6-3 to earn the right to counter pick the first three games of the Relay Race Finals. Fnatic and Origen took care of Cloud 9 and TSM before G2 Esports fell to Team Liquid in the Mid-Season Invitational rematch. Fnatic then crushed TSM in game four to secure the win for the LEC.

Nisqy made some impressive plays on Irelia and tried to carry the team despite getting camped early, but the snowball from Fnatic’s top half of the map came so quickly that C9 could never take objectives off the back of their picks. Global ultimates from Tim “Nemesis” Lipovšek’s Twisted Fate and Zdravets “Hylissang” Iliev Galabov made it near impossible for C9 to overload a side of the map without an easy Fnatic response. Fnatic won the opener 17 kills to 11 in only 26 minutes.

The LEC made their intentions clear by picking Origen into TSM in game two — they wanted to sweep the Finals. Running G2 Esports into TSM would have given the LEC great odds to go up 2-0, but it would have left Origen to face Team Liquid in game three. The matchup also gave Alfonso “Mithy” Aguirre Rodríguez another revenge game against his former team.

The draft for TSM looked promising as they picked up winning solo lanes and a jungler in Olaf who could offer early help. But Origen made the first move, catching TSM invading their red side jungle and picking up First Blood on a flashless Jonathan “Grig” Armao. Whether that play influenced Grig’s mindset going forward, Grig was invisible throughout. Søren “Bjergsen” Bjerg was active on Leblanc via teleport and roams to keep TSM in it, but Origen held the early gold lead through turret kills and CS leads despite TSM’s kill lead.

TSM tried to force a fight around a drake spawn at 17:30 but a great counter engage by Mithy turned the fight around for Origen. Barney “Alphari” Morris picked up a double kill and ultimate reset on Aatrox and Origen added their fourth drake as they evened up the kill count. By not falling behind TSM in the early game, Origen cruised in team fights and handily won the second game of the series 8 kills to 7 in 29 minutes.

If their team choices did not already give away that the LEC was playing for a sweep, G2 Esports’ lineup choice in game 3 told the story. Unlike their compositions during the Group Stage, G2 played standard against Team Liquid. No pocket picks, no role swaps. TL would have to win this game on merit, unlike their win over G2’s four assassin composition in the Group Stage.

G2 Esports looked poised to control the game early on. Marcin “Jankos” Jankowski and Rasmus “Caps” Winther got the better of Jake “Xmithie” Puchero and Nicolaj “Jensen” Jensen in the opening 2v2 skirmish mid for First Blood. Jankos visited again minutes later to set Jensen’s Yasuo behind and it looked like the route was on early.

As he does in seemingly every international tournament, Jung “Impact” Eon-yeong gave Team Liquid a spark with a solo kill on Martin “Wunder” Hansen. TL tried a 2v2 mid lane again seconds later, but this time Jensen’s Yasuo was 6 and his combo with Xmithie’s knock back allowed for an instant kill on Jankos. Caps and Jensen both stuck around on low health, darting back and forth to try to pick up the solo kill. In the end, it was Jensen getting the better of Caps by dodging out the Leblanc chains and dashing in and out of turret range for the kill.

Team Liquid continually used the Gragas-Yasuo combo to burst Caps out before he would come out of the CC-lock. Jo “CoreJJ” Yong-in hit several clutch Lux bindings, Impact’s Gangplank finished 6/1/6, and TL could not be contested in team fights with a lead. They eventually won 18 kills to 10 in 34 minutes to pick up NA’s first win in the Finals and extend the best-of-five.

With C9 not at full strength, the LCS threw TSM out for game 4 and save Team Liquid for a potential game 5. The LEC no longer had counter pick rights in game 4 and blind picked Fnatic at the same time. They similarly had the thought to save their ace for the potential final game of the series.

That potential rematch would prove unnecessary as Fnatic dominated TSM from start to finish in game 4. TSM once again started Grig over Matthew “Akaadian” Higginbotham, the jungler used in their win over Fnatic in the Group Stage (albeit against substitute jungler Daniel “Dan” Hockley). Grig and Bjergsen got dominated in the 2v2 fights mid lane as Grig missed ultimate after ultimate on Sejuani, a common sight for veteran North American fans. Broxah was as good as Grig was poor, hitting cocoon after cocoon on Elise and to cement his standing as the best jungler at Rift Rivals and showing why Fnatic have not used Dan in any regular season matches since announcing he would share time with Broxah.

The popular refrain heading into the event was that G2 Esports were better than everyone else, but the rest of North America would be competitive with the rest of Europe. Neither of these ended up being the case. While G2 Esports are still probably seen as the better side over Team Liquid, it’s worth noting that Team Liquid beat them twice in two tries, though the first result should be thrown out based on composition. Team Liquid finished 3-1 in the event, beating G2 Esports twice, Origen once, and losing to Fnatic. They proved that they belong with the upper tier of LEC teams.

TSM and Cloud 9 did not. Origen — the weakest team the LEC sent to Rift Rivals — finished 3-1 for the tournament, losing only to Team Liquid. Fnatic finished 4-1 after dropping a game to TSM, but that was with substitute jungler Dan having a very rough game on Rek’Sai. C9 was without Sneaky for days 2 and 3, but neither of their games on day 1 sparked hope that C9 could be competitive in the rest of the tournament. TSM took one game off a Broxah-less Fnatic and got crushed by a jungle Pyke from G2. If Origen are 3-3 in the LEC, what would TSM and C9 look like playing in Europe?

Meanwhile, the LEC has to be excited about the depth in their league after Rift Rivals. Fnatic proved their win over G2 in the regular season was no fluke by dominating Team Liquid in Dan’s debut. Origen played well enough to take all three games against non-TL teams as well. While the LCS is starting to look like Team Liquid or bust, the LEC is well-positioned to have multiple threats at the 2019 World Championship.