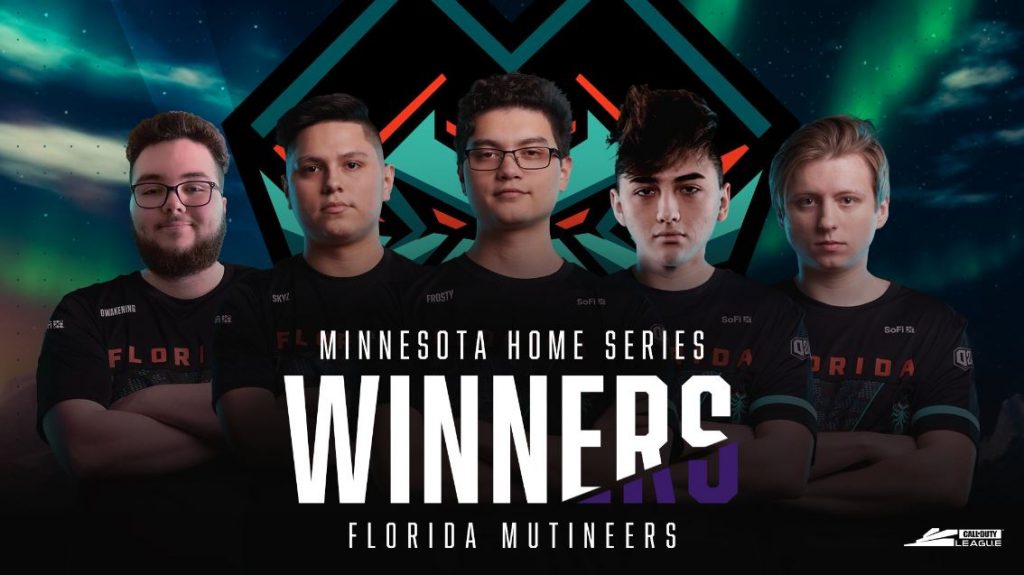 Game, Mutineers. 3-1 and it was EZ AF. pic.twitter.com/Lr4yzrxkbw

The Minnesota Rokkr home series featured the top five teams and the bottom three teams going head to head in an intense competition. Atlanta and Dallas made it to the semifinals as expected, but the Chicago Huntsmen were surprisingly eliminated by the Los Angeles Guerillas during bracket play.

The Florida Mutineers entered the Minnesota Rokkr Home Series with a new roster featuring Owakening. The team had little issue adjusting to their new roster, however, and eliminated Chicago in their first match of the weekend. They easily defeated the Los Angeles Guerillas in their second match and secured their spot in the semi finals.

Florida eliminated the Dallas Empire in the semifinals who are also considered to be a top team in the league. Dallas did not go down easy and were up in the series 2-1. Florida managed to regroup and take the series to map five where they won a round 11 Search and Destroy match.

Florida was not done defeating champions and went on to dominate Atlanta in the Grand Finals with a 3-1 victory. Atlanta was able to win Arklow Peak Search and Destroy but were unable to hold their ground in respawn game modes. Atlanta almost forced a game five but ultimately lost by 19 points in Hackney Yard Hardpoint.

🗣 Florida @Mutineers firing off call-outs in what could be the last map of the Minnesota Home Series in our @ASTROGaming Listen-In. #CDL2020 pic.twitter.com/iMXFBtSYTo

Florida’s amazing performance during the Minnesota Rokkr Home Series helped them climb the leaderboards and remind fans that they are a strong team. Despite their success, Florida is still in fourth place behind Atlanta, Chicago, and Dallas.

A Rough Weekend for Chicago

The Chicago Huntsmen started the weekend in what was considered the easier group of the home series. They would not face the other top two teams until the semifinals and were only expected to have issues against the Florida Mutineers. Florida and Los Angeles were not planning on being easily defeated and stopped Chicago in their tracks.

Chicago lost their first match against Florida in an intense game five series. Both teams took turns winning a map and brought the series to a map five Rammaza Search and Destroy. Chicago lost the final map 6-4 and were sent to the loser’s bracket to face Toronto.

Toronto could not find their stride against Chicago and were eliminated in a quick 3-0 series. The Los Angeles Guerrillas were ready to stop Chicago’s reign of terror and eliminate them before the semifinals.

This series once again was a back and forth fight between the two teams that forced a fifth map. Chicago and Los Angeles faced off in Gun Runner Search and Destroy which was bad news for Chicago. The team struggled in Search and Destroy so far during the home series weekend and were unable to bounce back.

Los Angeles defeated Chicago 4-6 and eliminated them from the weekend in a surprising turn of events. Los Angeles was unable to make it past Atlanta in the semifinals, but they still took the series to map five and showed they are close to dethroning the best teams in the league.

The first substitution for an injury

Minnesota may have struggled during their Home Series event, but they still made history in another way. Alexx suffered a thumb injury and was substituted for Exceed who replaced him during their match against Seattle. He had the opportunity to play a second match if needed, but the team was unfortunately eliminated.

🚨 Injury substitution: @ExceedLbX will be starting in place of @Alexx1935 (thumb) today. pic.twitter.com/AxdIJ0VOMq

The inaugural season of the Call of Duty League has had a few historic moments involving roster changes. Enable was substituted mid series for Pandur which is only a small part of Seattle’s roster changes this season. 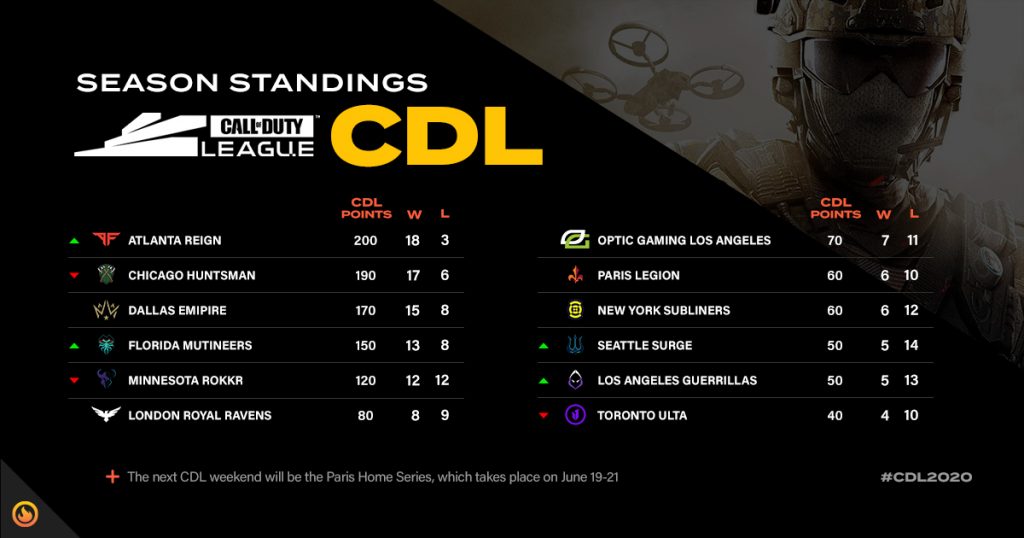 The Florida Mutineers jumped ahead of the Minnesota Rokkr who are now in fourth and fifth place respectively. Atlanta returned to the number one spot in the League, but Chicago is only ten CDL points behind.

The Los Angeles Guerrillas have continued to improve and are now tied for 10th place with the Seattle Surge. Toronto has continued to struggle and is now in 12th place and 10 CDL points behind Seattle and Los Angeles.

Call of Duty fans will have a short wait until the next Home Series event. The Paris Legion Home Series will take place on June 19th-21st. The Florida Mutineers will have a chance for back to back home series wins and will face the Paris Legion in the first match. Dallas, Toronto, and Atlanta will also have chances to redeem themselves at the next home series weekend,