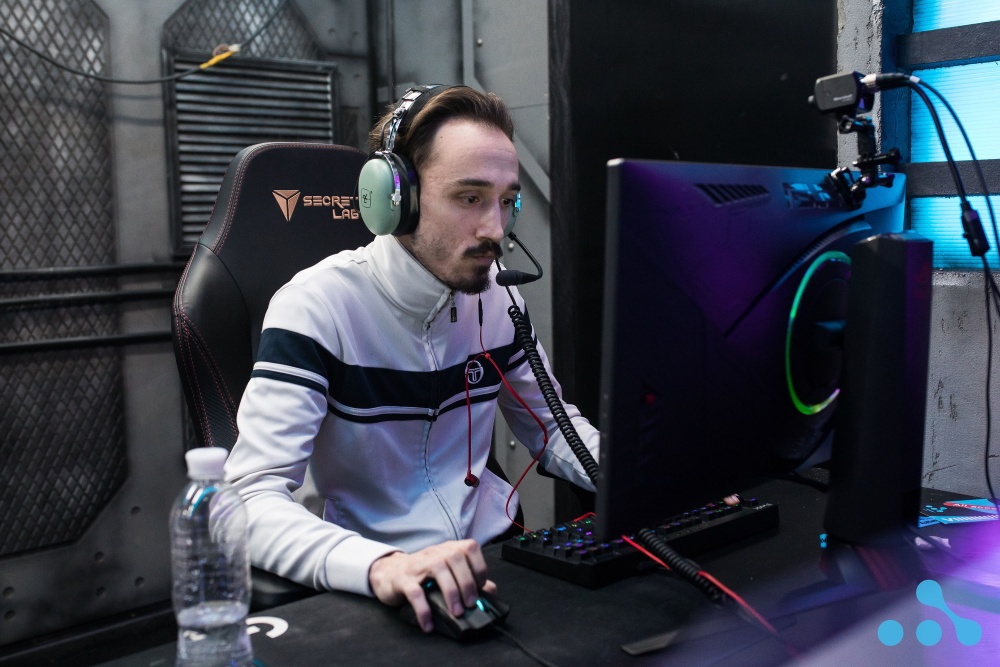 BoraNija (pictured) has been a standout for his new mudgolem stack in a near-perfect run through the event. (Photo courtesy WePlay)

The BTS Pro Series Season 3 has been an impressive event so far, with a host of teams that just shy of the top-tier in EU & CIS Dota battling for supremacy. With the likes of Team Secret, Nigma, OG, Alliance, etc. absent from this tournament, we’ve seen the rise of the next few squads that could be able to challenge on that level.

Even with notable names like Ninjas in Pyjamas and Viking.gg in the mix, it’s been a team formed just 10 days ago that’s stolen the spotlight. The mudgolems, a new stack formed by Neta “33” Shapira and Adrian “Fata” Trinks following their departure from Alliance, has topped the table at this event after a stellar group stage.

They’ve collectively put to shame a host of sponsored teams, dropping just two games in the whole group stage. Meanwhile, the event has been a disaster for the second tier of CIS organizations. B8 were eliminated after winning just one game the entire stage, while Team Empire fared little better with just a trio of draws. The only CIS teams close to the top of the standings, were HellRaisers and Khan. As one of the few teams to take a games off the mudgolems, they truly are their regions great hope in this event.

But even if they can stand up to the mudgolems in one or two matches, there’s a steep hill to climb to beat them outright. It’s fair to say the mudgolems have a little bit of a chip on their shoulder and they play like they have something to prove. There’s not one member of the team that hasn’t seen themselves dropped from a top roster in the last three months. 33 and Fata were cut from Alliance. Milan “MiLAN” Kozomara was unceremoniously dropped from Chicken Fighters when the team was acquired by NiP. The same thing happened to Duško “BoraNija” Boranijaševic and Oliver “skiter” Lepko before Aggressive Mode was signed by Family Team. This is a hungry group of players and their playstyle shows that off.

Instead of allowing the mudgolems to become an ‘Island of Misfit Toys,’ a team stacked with unwanted players, the squad has proven that each one of them should be on a top-tier roster. In their dismantling of NiP, who were hot off a win against Team Unique on September 16th, the mudgolems showed what makes them so dangerous.

In game one, BoraNija took control with solid play of a very average hero in Lina. Yet, he so bullied the Dragon Knight of Ondřej “Supream^” Štarha, there was no chance for NiP. Mudgolems had effectively called NiP’s bluff of picking Alchemist and Dragon Knight, challenging the mudgolems to stop them before the two hyper-scaling heroes went out of control. But thanks to some ridiculously dominant plays by Skiter, 33, and BoraNija, there was no chance for NiP.

Game two went no better for NiP. Despite this time picking a stronger early game composition, the team still couldn’t match up to the mudgolem’s cores. In one of the most one-sided games of the tournament so far, 33 and company found themselves pushing into NiP’s highground in just 20 minutes. In a day filled with 2-0’s, the mudgolems stood out because of just how decisive they were.

That's our first L in the BTS League. Next game is on the 18th of September. #GONINJAS #DOTA2 #BTSProSeries pic.twitter.com/6O9VkTDM5u

The mudgolems can play fast, early-game Dota 2, and they can out draft you as well. The biggest question mark on their ability comes with the super late game. Few of their games go very long, with their matchup versus Team Empire lasting just 10 minutes (with the draft lasting longer than the actual game). Their longest matches were against Team Unique, in a pair of come from behind wins.

There the squad were able to hunker down and out last the powerspikes of their opponent’s, but it was the closest they’ve looked to being flustered. If a team can push them past the 45 minute mark, the mudgolems could be stopped. If not, it’s unlikely anyone will challenge them on their way to winning this tournament.

The other bright spark of the BTS Pro Series Season 3: Europe/CIS event has been Vikin.gg. The team has spent much of the past half year on the periphery of the top of EU Dota. They’re occasionally able to take a game off a top team, and can handily defeat almost all of the teams in the tier two events they attend. This awkwardly puts them in a limbo between two tiers, with little hope of advancing – unless they can step up this tournament. They’ve already secured an upper bracket playoff spot, and will bypass facing mudgolems in the first round. This puts them on the best course to sneak a win away from the favorites to win it all.

We're almost there trying to end the game 🥵 Can we do it?

The other wildcard is NiP. Despite their aforementioned thrashing at the hands of mudgolems, they’ve still stepped up their game considerably. The team is still an S-tier name in terms of brand recognition, but their performance has yet to catch up to their aspirations. Some of their highlights, like their defeat of Team Unique and HellRaisers, show that when pressed they can perform. But beating tier two CIS teams won’t get them anywhere. They need to take games consistently off European stacks to hope to achieve anything.

Khan was also a massive surprise in this event. Despite losing a large quantity of their games during the stage, the CIS squad managed to scrape together a cumulative 8-8 record after beating HellRaisers on September 22nd. This put them within a hair’s width of making it to the upper bracket. They relied on 5men not being able to finish off NiP 2-0 in the final game of the group stage, and after a valiant hold by the Ninjas in their last game of the day, Khan would sneak into the upper bracket. They’ll face Vikin.gg on September 27th.

The BTS Pro Series Season 3: Europe/CIS continues on September 27th, continuing to the finals on September 30th. The brief break in proceedings also gives you a chance to sample the AI delights of BOT TI3, which will be held from September 23rd. You can catch all the action live on Beyond the Summit’s official Twitch channel.