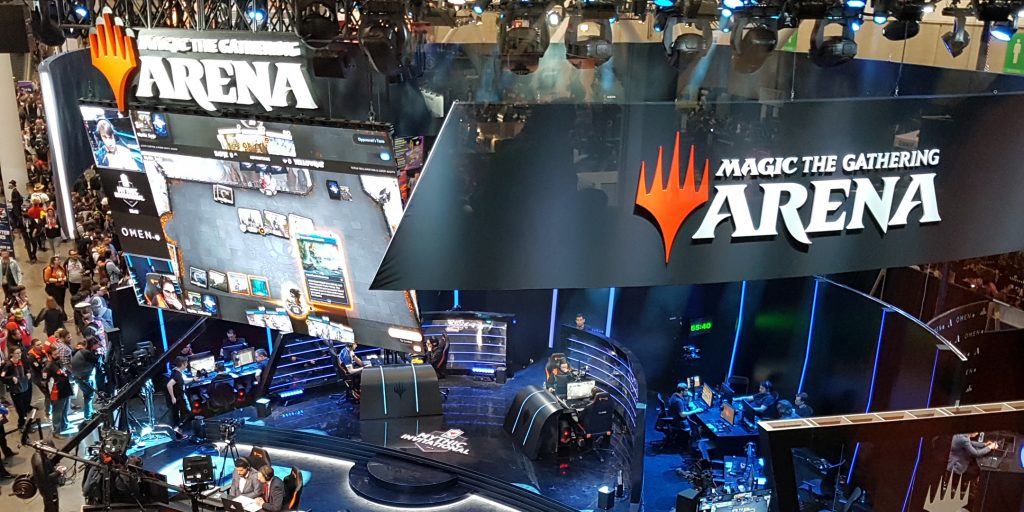 Magic the Gathering: Arena was a focal point on the PAX East 2019 Expo Hall floor.

Wizards of the Coast hosted a massive Magic the Gathering: Arena event at PAX East 2019. Part of it was a million dollar affair. With a combination of pro players, invited influencers and a small group who made their way to the top of the Arena leaderboard in February, the event was a preview of the circuit this year. There will be digital Arena events included in the 2019 Mythic Championships circuit, alongside tabletop.

But that’s not the whole story. Alongside the massive tournament was a range of options for Magic enthusiasts to get involved at their own level of competition. Whether you’d never picked up a deck before or were semi-pro, Wizards had you covered.

The tournament unfolded across all four days of PAX East. It was streamed on the MtG Twitch channel, for those at home or those who didn’t want to stand all day in the Expo Hall.

With top-notch casting talent, the competition occupied a prominent space on the PAX floor. With all the production equipment and the massive set-up, the booth stood-out. On the last day of the convention, the competition moved to the PAX Arena. With a stage and more seating, it was a mini-esports experience nestled within the larger PAX East event.

As an attendee, it was difficult to follow the tournament because there were so many other demands on our attention. Because the event was streamed, it’s possible to catch up on it through the videos.

Arena was a prominent component of the PAX East 2019 experience, but there were plenty of other ways to enjoy Magic the Gathering at the convention. While these were of the tabletop variety, the ability to play tabletop MtG can be transferred into playing Arena (and vice versa).

The Learn to Play booth welcomed newcomers in a carefully designed way. Out front was a desk with pyramids of newbie decks and a friendly expert, ready to answer questions and welcome you into the fold. When we visited the booth on Sunday, the seats at the table were full of people, young and old, learning how to play MtG. The decks used are thin, unintimidating, enough to learn the basics. Experts were on hand to walk new players through the fundamentals.

And, of course, there’s the artwork. MtG cards feature beautiful images. They’re enjoyable to look at and fun to use in the low-pressure learning environment.

After you’ve learned how to use your deck, you’re welcomed back to the massive play area beyond the booths on the Expo Hall. Tables extended across a large expanse, providing plenty of space for people to get involved.

With a quick registration process, you could join the Planeswalker Deck League. Then you were able to play games at your leisure and potentially earn more cards. It’s an elegant system, meant to move people through the learning stages quickly.

There were also smaller tournaments being run on an impressive schedule. If you came to the event as an enthusiast, you could register for one of these. They bridged the gap between newcomer or casual player to competitive player, with the Arena competition on hand for the pros (or fans thereof).

Finally, the Diversity Lounge also had an MtG booth, the Planeswalkers for Diversity. They provided another avenue for learning and playing away from the crowds in the Expo Hall. It was a quieter place, with an even more welcoming atmosphere.

War of the Spark

If those weren’t enough, all of the possibilities for playing and watching Magic, Wizards hosted a panel to reveal their next card set: War of the Spark.

The trailer is a gorgeous introduction to the lore of the game. It was released as part of the Wizards Panel, which was held in the PAX Arena space rather than one of the theatres as other panels were. You can see the emotional reaction of fans to the trailer in the panel video. There’s something beautiful and gripping about seeing such a passionate response to it.

The panel included sixteen preview cards, so check it out if you want to be spoiled. The card set releases on May 3, with an expected 264 cards.

PAX East provided an excellent entry point for both playing and viewing competitive Magic the Gathering. If you want to get more involved in the scene, there are plenty of options over the coming year.

Professionally, the next major event for MtG fans is the Mythic Championship II. It’s tabletop-based, taking place in London, England from April 26-28. The third Mythic Championship will be Arena-based, but there are currently no dates available for it. Expect it sometime between the end of April and mid-July when the fourth Championship is scheduled.

For people who would rather play than watch, you’ll want to look for a local MagicFest or download Arena and start playing online.