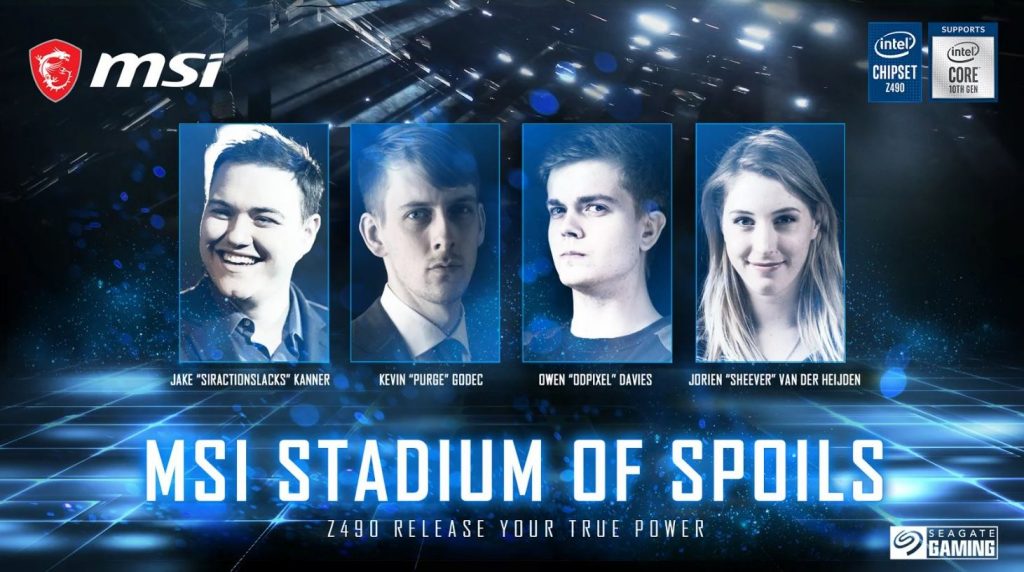 Four top talents, four Dota 2 challenge modes, and lots of giveaways - it's precisely the type of shameless shilling that has the potential to be genuinely entertaining. (Photo courtesy MSI)

As if you needed more of an excuse to watch or play Dota 2 at the moment, Jake “SirActionSlacks” Kanner, and a host of other broadcast talents, have teamed up with MSI to reveal the Stadium of Spoils. This fan tournament and giveaway event was revealed in posts by Slacks on Twitter and by sponsors MSI on their official website late on June 15th

The time has come-The ultimate showdown between @PurgeGamers and @SirActionSlacks! Welcome to the @msitweets STADIUM OF SPOILS where YOU viewers battle it out in 4 games of skill to win MSI @seagategaming @IntelGaming gear! win playing, win watching! https://t.co/H4HgkG7jKk #ad pic.twitter.com/Q3OcKpYI1L

Across two days, one catered to US viewers, and another to European fans, MSI will host this open event. The First Wave is scheduled for June 27th, kicking off at 4:00 p.m. PDT, with SirActionSlacks and Kevin “Purge” Godec captaining teams and Admir “LizZard” Salkanović, and Darren “KillerPigeon” Elmy on casting duty. Then on July 4th at 6:00 p.m. CEST Jorien “Sheever” van der Heijden and Owen “ODPixel” Davies, with LizZard and KillerPigeon returning to the caster’s desk.

The event promises to be an entertaining affair, giving fans and subscribers of prominent Dota 2 broadcast talent a chance to play with their favorites in four unique events. These include a “Least Played Mode” match, a showdown between the top Ability Draft players, a faceoff between some of the Talent’s Twitch subscribers, and a high MMR streamer rep game to close things off. While most of these events are strictly amateur only, the final “high MMR” matchup may contain a few familiar faces, especially given fanbase of these broadcasters.

But beyond the matches, Stadium of Spoils is very much about the giveaways it seems, with prizes handed out to those watching, those participating, and anyone who fills out the giveaway form in the announcement.

While obviously the event is mainly a PR move for MSI, with the giveaway being the biggest reason to tune in, that’s not to say there won’t be some decent action on display. These talents are entertaining and occasionally even skilled Dota 2 players in their own rights, with ODPixel in particular holding on to the top-spot of the recent BLAST Bounty Hunt’s Skill Shot challenge.

The event will be broadcast live on Twitch, although the exact stream has yet to be released. For more information on the event, and how to enter, head to MSI’s official website.