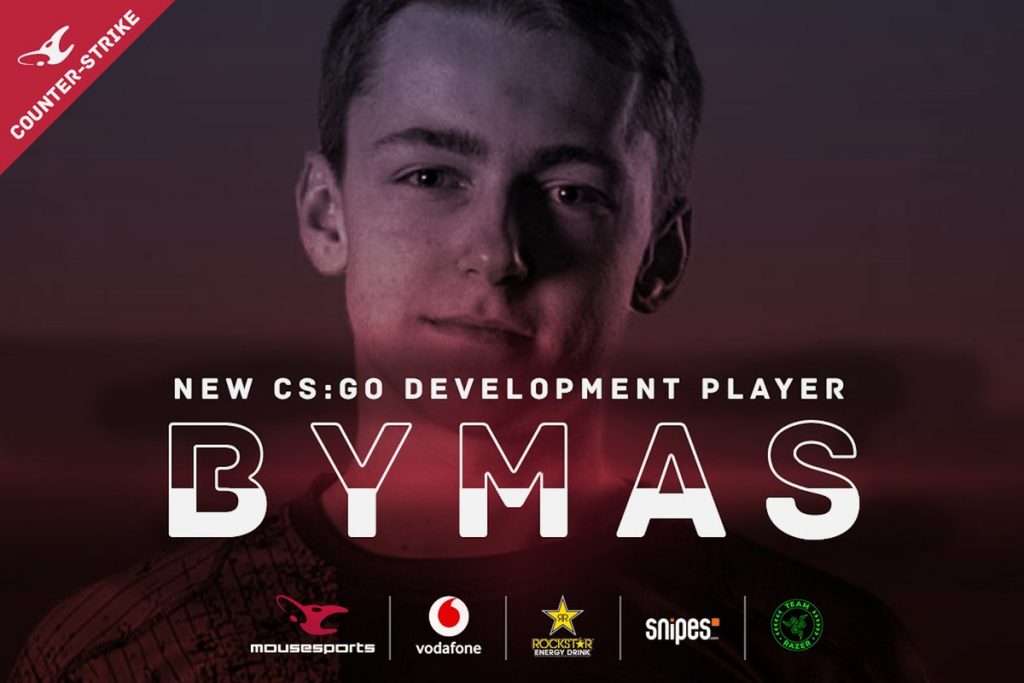 Mousesports has announced they have signed Aurimas “Bymas” Pipiras as the sixth man on the roster. Mousesports’ international side joins the likes of Astralis, as they look to create an extended roster.

We experienced how sudden circumstances can change this year. Thus we decided to broaden our roster and bring in a 6th player to be prepared. We are excited that we can present a huge talent as Bymas to fill that role, who fits into our philosphy of developing young players.

Bymas has gone from zero to hero in 2020. He started 2020 in Demolition Crew, before joining FaZe Clan when the team needed a stand-in after benching Olof “olofmeister” Kajbjer Gustafsson on May 25th. Since then, FaZe Clan has propelled up the ESL and HLTV rankings following the signing of the sixteen-year-old.

The Bymas move to mousesports is slightly surprising. Recent rumors have surfaced stating Bymas’ temporary position on FaZe Clan was due to end after Markus “Kjaerbye” Kjaerbye was linked with FaZe Clan. The Dane recently announced his departure from North after being on medical leave for some time. But we did not see the mousesports move coming.

Mousesports went from being one of the best teams at the start of 2020 to choking out online throughout the spring and summer. The new era of CS:GO has punished the former title contenders, as they have been upset countless times by teams like ENCE and Virtus.pro. Their recent results have them sat on a 28.6% win-ratio, so changes to contend this new era are needed. Bymas has proven he can boost a team’s performance in the online era, and this is the hopes of the roster.

Additionally, mousesports has a history of developing young talent. Robin “ropz” Kool and David “frozen” Čerňanský both got their big breaks and improved their career on this squad. Bymas fits perfectly well into this philosophy. There is a real chance Bymas may become an even bigger star on this roster than he did with FaZe Clan.

The international line-up will return to action very shortly as they are one of the team announced for the ESL One Cologne 2020 event. This is one of the biggest events in CS:GO period. No doubt the team will want to be on their best form as the top European teams will be in attendance. Furthermore, this roster will compete in the ESL Pro League Season 12 and are still in the race for the ESL Rio Major.

This six-man roster may be what the teams need to make their move in the online era of CS:GO. Hopefully, the team can return to their former glory they only recently lost due to COVID’s impact on the CS:GO landscape.