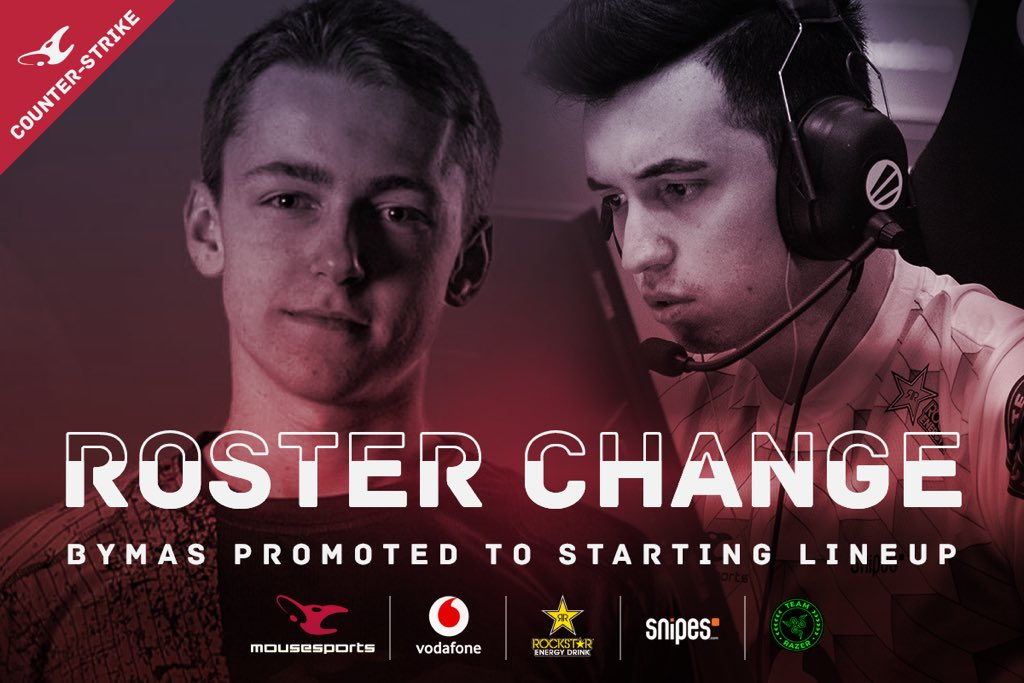 Bymas has been promoted to the starting roster of mousesports while woxic will be left inactive. (Photo courtesy mousesports)

Following their abysmal performance at ESL One Cologne, mousesports have decided to make their first roster change in over a year. Özgür “woxic” Eker has been benched in favor of Aurimas “Bymas” Pipiras. Bymas was recently acquired from FaZe Clan as a sixth man prospect and is being activated after just two weeks.

As a direct reaction to our recent results and the ongoing online league play, amid the covid-19 pandemic, we've decided to promote @bymascs to the starting roster to replace @w0xic. pic.twitter.com/XnfYDjvkVk

Coming into 2020, mousesports was one of, if not the hottest team to watch. They had just made four consecutive finals appearances at big events and won three of them. Their streak even continued with a win at ICE Challenge in February. Mousesports were one of the tournament favorites at IEM Katowice, but only made it to top eight before falling to 100 Thieves.

At that point, the global COVID-19 outbreak caused all tournaments to be played online. Mousesports did well in the first one, taking second place at ESL Pro League Season 11. They proved that they had what it took to play high level Counter-Strike in an online environment. However, it was all downhill from there.

ESL One: Road to Rio in May started a streak of horrible performances for the once highly respected squad. Mousesports recorded their first bottom four finish at ANY event since October 2019. Following that, they would also finish in the bottom four at DreamHack Masters Spring, cs_summit 6, and now ESL One Cologne.

Throughout all of this, woxic’s stats suffered. HLTV’s 12th best player of 2019 has been firmly below average in every metric in the past three months. That’s not to say the entire team hasn’t been taken down a peg, but a star AWPer has to bring more to the table.

His replacement in Bymas is a young 17-year-old rifler. Mousesports has multiple players who can pick up the AWP, making the shift manageable. Bymas recently stood in for FaZe Clan for about three months and showed great promise as a player. His development is coming along nicely, and being given more freedom within the team will be a far cry from the role filling he was doing alongside stars like Marcelo “coldzera” David and Nikola “NiKo” Kovac on FaZe.

Hopefully for mousesports, this will be the change that can bring them back into relevancy. It’s a long way back to the top for the now 16th ranked team. However, every redemption story has to start somewhere. Mousesports’ new roster will debut at ESL Pro League Season 12 in under a week, with their first match being against FaZe Clan. Mousesports are now: