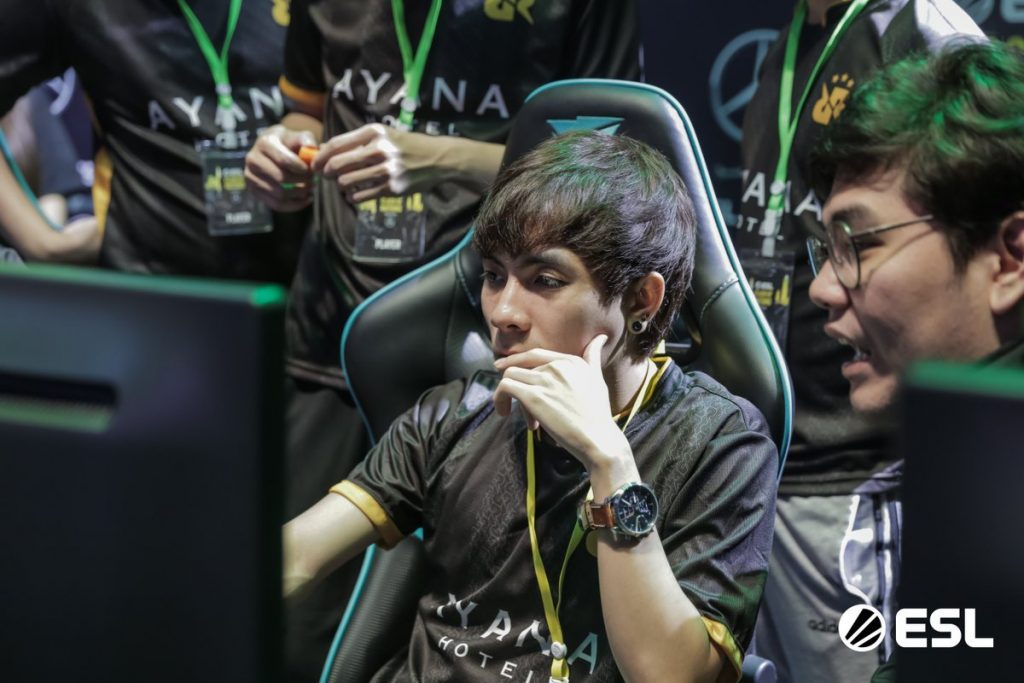 It’s been a week of heated action at the BTS Pro Series Southeast Asia division, but the dust has finally settled now that the playoffs have run their course. Thai squad Motivate.Trust — the same one that competed at the highest level in SEA back in the DotA Allstars days — triumphed over all their rivals to capture their first title in this era of online events.

They storm through the Lower Bracket to overcome the odds and WIN #BTSProSeries SEA!

That's all from us from the SEA region for now. We'll catch you around for some more SEA Dota! 👋

This feat was of course quite impressive, especially after the runaway success of the newly-formed Among Us in the group stage and the early goings of the playoffs. Add to that the fact that they defeated Among Us and the team that sent them to the lower bracket in the first place (that being BOOM Esports), and it’s easy to see just what Trust had to go through for this win.

A Close Call From Up Top

Trust’s playoff run began in the upper bracket, thanks to their fourth place finish in the group stage. This did result in them having to face the red-hot Among Us right off the bat — but they certainly did not back down from the challenge. Although the top seed struck first in the best-of-three series thanks to Nuengnara “23savage” Teeramahanon’s huge game as Terrorblade, Trust managed to even the score in the second map.

In spite of Poomipat “Fearless” Trisripanit’s loss in the middle lane as Ember Spirit against Azel “Abed” Yusop’s Outworld Devourer, the rest of Trust maintained the pace and kept Among Us from getting much done in the minutes leading into the mid game. Some key moves from the Thai side allowed them to tip the scales in their favor around the 20 minute mark, and they would not relinquish the lead for the rest of the 36 and a half minute contest.

The reversal was denied in the end by Among Us, though, who blitzed Trust in just 23 minutes in the third game of the series. This time around it was Abed who played Ember Spirit, and boy was it quite the performance by the young superstart. He scored 12 of his team’s 32 kills in total, running Trust completely into the ground in the process. The Thai lineup scored just six kills in comparison — half that of Abed’s total. Trust simply did not stand a chance in this one, conceding victory and their upper bracket berth as a result.

Nevertheless, this turn of events was a sign of things to come for Trust, as they showed just what they were capable of — that being putting a dent in Among Us’ seemingly impenetrable armor.

And so Trust found themselves facing elimination — but the threat of a sudden exit from the tournament seemed to light a fire under them instead of demoralizing them. Their first task after falling to the lower bracket: get past the all-Filipino Neon Esports.

That’s exactly what they did, refusing to mess around and finishing the series in two games. The first map was a bit touch and go for them through the mid game thanks to some teamfights that didn’t quite go their way — but their recovery past the 20 minute mark swung the game quite heavily in their favor. A full five-man wipe of Neon Esports caused their advantage to shoot up about 5,000 gold, and from there it was a matter of staying frosty and closing out the game. True enough, Trust would give up just one kill for the rest of the game in a perfect display of clean and disciplined gameplay.

Neon tapped out just 67 seconds shy of the 40 minute mark, forcing them to go into Game 2 on the back foot. They stayed on their heels unfortunately, as they lost two out of their three lanes in the second map. Not even the farming pace of Filipino veteran Andrei “skem” Ong as Drow Ranger helped them repel Trust’s advance in the late game, as Souliya “JaCkky” Khoomphetsavong’s farming rate as Phantom Lancer was even faster. With no good answers to the many illusions thrown their way (aside from Snapfire ultimate), Neon Esports knew they were beaten and surrendered after 43 minutes of play.

They take the series 2-0 over NEW Esports, securing their spot on the final day of #BTSProSeries SEA!

We'll be back tomorrow to crown a Pro Series champion! 👑

Trust did the same thing to NEW Esports, a team composed of mostly tenured Malaysian players like the Shadow Fiend legend Ng “YamateH” Wei Poong himself. The Thais looked shaky in the first game, drawing even at best in their lanes; bad news for a greedy draft that includes Ember Spirit, Phantom Lancer, and Faceless Void all on the same team.

Around the 25 minute mark, they were staring down the barrel of a 10,000 net worth advantage over on NEW Esports’ side — but Trust kept their focus going into the late game. Ever patient and methodical, the cool-headed Thai squad picked their opponents apart in late game scuffles, led primarily by JaCkky’s heavily farmed Phantom Lancer. A few big engagements going their way allowed them to turn the tables before it was too late, and by the 35 minute mark their momentum was just too much for NEW Esports to stop.

They had a relatively easier time in the second map, doing well in the laning phase to keep NEW Esports’ lead to a minimum. Their draft truly came alive at the end of the laning phase though, with Fearless’ Ember Spirit and Natthaphon “Masaros” Ouanphakdee’s Timbersaw at the forefront of Trust’s mid game charge. NEW Esports put up a valiant effort as time went on — but once the late game had arrived there was little they could do against JaCkky’s overfarmed Naga Siren.

In a twist of fate, Trust’s opponents in the lower bracket finals turned out to be Among Us yet again, placing both teams in a grudge match with a ticket to the Grand Finals on the line. Among Us actually fell to the lower bracket at the hands of SEA mainstays BOOM Esports, who put in a stellar performance in the match to go 2-0 and earn themselves an easy Grand Final berth.

Among Us strongarm their way to a Game 1 victory! 🔥

Can https://t.co/39Jl53IC33 battle back or will Among Us roll their way into the final? Have your say on this series and our others at @Loot_Bet!

Much like their first match in the upper bracket, Among Us were the first to score in the series. Although the lanes were at a deadlock across the board, it was Abed’s use of Leshrac that allowed Among Us to stay just slightly in front in the early game. They lost this lead momentarily going into the mid game after a teamfight that ended in disaster (to be specific, Abed died back) — but they quickly took back their advantage shortly after. With the sheer pushing power afforded by their Leshrac and Lifestealer draft, Among Us closed things out before 30 minutes of elapsed game time.

Determined not to fall to their in-tournament rivals after having come so far, Trust dug deep to take the win in the second game. Their laning phase was pretty rocky to start with, and we would have blamed no one for thinking that their run at the event had come to an end. Despite the sketchy start, though, JaCkky once again came through for his team when they needed him the most, sniping down their opponents with his 6-0 Drow Ranger. Their lead ballooned to an absurd amount past the 25 minute mark, putting the game truly out of Among Us’ reach going into the late game. Unable to slow JaCkky down, Among Us simply had no choice but to surrender after 37 minutes of play.

They complete the upset to beat Among Us 2-1 and send themselves to the Grand Final!

Among Us was ejected.

Of course, their final game could not have been any closer. Going the distance at almost 50 minutes of elapsed time, it was a true fight to the death for the remaining Grand Final slot. Abed’s fantastic Puck play helped Among Us jump out to a big lead early on, making it look like Trust was finally done for. They carried an advantage worth nearly 10,000 gold going into the late game — but as expected, JaCkky was there yet again to save the day.

His extremely farmed Terrorblade (with 941 GPM by the game’s end!) was enough to keep Among Us at bay, pumping out obscene amounts of damage all the while. It was an incredible end to a hard-fought series, which rewarded Trust with a chance to win the whole thing in the Grand Finals.

Motivated to the Max

What happened in the championship round was completely shocking. Trust strolled into the Grand Finals with a level of confidence unseen in them throughout the entire tournament, and proceeded to sweep BOOM Esports three games to none Although it took an average of 40 minutes per game for them to do so, Trust made BOOM look like they were almost clueless throughout the series.

MG Trust SWEEP the Grand Final of #BTSProSeries SEA to be crowned champions! 👑

The first game could have gone either way in the first 20 minutes, with BOOM Esports having the draft advantage thanks to their Riki and Doom picks against Trust’s Anti-Mage. But it was actually Masaros’ Timbersaw that did the heavy lifting, keeping his teammates safe with his early Lotus Orb and creating massive space in teamfights. Trust rode the momentum generated by Masaros through the mid game, clinging to their lead as teamfights occurred every now and then. By the late game, their lead was simply insurmountable, shooting up to more than 20,000 gold by the game’s end.

Game 2, on the other hand, was a complete routing of BOOM Esports. Trust’s Tiny, Magnus, and Faceless Void combo was too much for BOOM to handle, and they were unable to get any traction throughout the 44-minute contest. The pace that Trust were playing at was just too fast and too difficult to stop, forcing them to tap out and accept that they would have to pull off a reverse sweep in order to win the tournament.

That, of course, never happened. Thanks to Trust’s efficient play in the third game, their victory was practically secured as soon as they came out of the mid game. Worawit “Q” Mekchai’s Tiny was the star of the final show, grabbing a 15-minute Blink Dagger that soon led into an Ethereal Blade before the 30 minute mark. From there it was just a matter of time until BOOM folded under his immense pressure — which they could not stop even after Randy Muhammad “Dreamocel” Sapoetra’s decent start as Morphling.

This is a great result for Motivate.Trust and for all of Thailand, whose players have mostly found success playing for teams that aren’t based in their home country. Though there is still plenty of work to be done in getting their nation back on the map this way, this win proves that Trust do have what it takes to play against the best that their neighbors in Southeast Asia have to offer. We expect more from them from here on out — if they can keep the momentum going and build on what they have learned at this event.

If nothing else, they as a team are now $21,000 richer, which I’m sure is a decent windfall for them given their usual place on the SEA food chain.