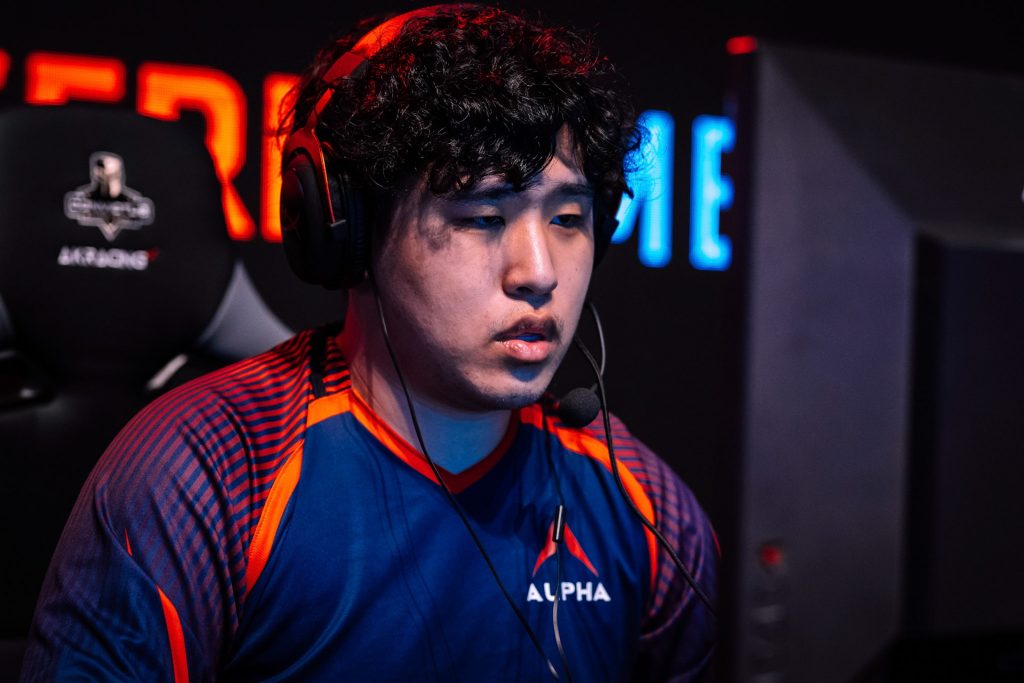 True to their name, Motivate.Trust have kept the fire from their last tournament win burning, and they are now poised to win back to back titles here. (Photo courtesy Steve Andreou)

Where Among Us shines, the all-Thai squad Motivate.Trust finds ways to shine even brighter. The group stage in the Southeast Asian division of DOTA Summit 13 has come to a close — and while Carlo “Kuku” Palad and the rest of Among Us were on top just six days ago, the final result looks quite a bit different this time.

Trust have gone on a fantastic run through the group stage, ending the preliminaries with a record of 14 wins and four losses in terms of maps. This gives them the top seed going into the playoff bracket, and a great chance at following up on their victory at the BTS Pro Series in September earlier this year. This performance indicates that they have indeed taken what they have learned in the previous tournament and truly built upon it in a big way — such that they now look like a premier threat within the Southeast Asian region.

With the momentum from the Pro Series still firmly on their side, Trust set out to cement themselves as one of the teams to beat here at DOTA Summit 13. They began their campaign in earnest, starting with a 2-0 victory over the OMEGA League Asia Divine champions 496 Gaming. Only the first map ever gave them any reason to sweat at all as they had to grind for nearly an hour to finally put the game to bed.

This was, of course, due to the resilience of two cores on the Vietnamese side — namely Nguyễn “Datbb” Thành Đạt and Bùi “Htz” Văn Hùng as Terrorblade and Storm Spirit, respectively. Htz in particular helped keep 496 afloat despite Trust’s ever-increasing net worth lead, zipping in and out to snipe key targets in teamfights here and there. But it mattered little in the end, as Trust’s late game advantage of 41,000 gold was much too large for them to overcome.

Sensing that the 53 minute game had taken its toll on their opponents, Trust closed out the two-game series in the second map in just 21 and a half minutes. The Viets stood no chance in this one from the get-go, having been down by almost 10,000 gold by the 15 minute mark. Both Poomipat “Fearless” Trisiripanit and Natthaphon “Masaros” Ouanphakdee led the charge for Trust in Game 2 as Mirana and Tidehunter, with the latter scoring seven of Trust’s 23 kills in total. Not bad at all for an offlaner playing a hero that isn’t known for popping off like that.

Their next few matches after that were business as usual. They did drop two maps going forward, but at one apiece rather than a disastrous 0-2 result for them. Their first trip-up was against BOOM Esports on October 24th, then another thereafter against Neon Esports. The latter was a little suspect given Neon’s troubles as of late, but the loss against BOOM could have happened to any other team, so no shame for them there we’re sure.

Sussing Out The Impostors

They did bounce back in a huge way after the initial stumbles, though, going on a perfect streak for three non-consecutive days. Their match against Among Us last Saturday was particularly amazing, as they brushed their opponents aside in two games in fairly convincing fashion. The first game went for nearly 50 minutes total in a slugfest that made every player on the SEA server proud. Among Us actually held a small lead up until the 25 minute mark, which is when Trust snatched it away via Souliya “JaCkky” Khoomphetsavong’s Phantom Assassin.

What better way is there to spend your Halloween than watching a BUNCH of Dota?

Among Us vs @Motivate_Trust starts right NOW!

JaCkky’s staggering farming pace of nearly 900 gold per minute facilitated Trust’s advance, as he was armed to the teeth with a Battle Fury, Black King Bar, Desolator, Satanic, and the Aegis of the Immortal at 26 minutes in. Following this up with an Abyssal Blade and a Divine Rapier, JaCkky’s damage output helped him carve his way through Among Us’ lineup, and not even the sheer armor of Muhammad “inYourDreaM” Rizky’s Terrorblade could stop the late game bleeding.

There were a few touch and go moments for Trust as the game went on, though. A one for four trade going the way of Among Us caused their gold lead to shrink significantly 35 minutes into the game, and it looked like Among us had found a way to stem the tide and give themselves another crack at the win. But alas, it was not to be. Some clean late game play allowed Trust to finish their opponents off before they could mount any kind of comeback. By the end of the first map, JaCkky had dealt nearly 60,000 points of damage to heroes. Just incredible.

Game 2 was also very competitive, as we’ve come to expect from these two premier SEA teams. In fact the final score was tied at 29 kills for both sides, and there were several lead changes throughout the 42 and a half minutes of play. Azel “Abed” Yusop led the way for Among Us as he is wont to do, getting off to a blazing start as Templar Assassin and cutting down Trust’s heroes early on.

Unfortunately for them, even that wasn’t enough to help them close things out before JaCkky could make good on his Arc Warden pick. Another astounding carry performance came out of the player from Laos, and the kind of heavy lifting that he did in the late game could not be understated despite his relatively low KDA ratio. His Magnetic Field served his team very well in the last 10 minutes of the game, hampering the right-click dependent cores of Among Us enough to allow the rest of his team to go to work.

Among Us lost their small advantage in the late game as a result, which helped Trust seal the deal for good.

This result proves almost without a doubt that Trust are here and that they’re here to stay. With the top seed in the playoffs, they are in prime position to easily advance to the next round, where they await the winner of TNC Predator versus Among Us. A rematch between them and the latter could be quite exciting, especially given that the series will be a best of three rather than a best of two.

Speaking of TNC Predator, they too have put in a very respectable performance in the group stage. A 12-6 record in maps has them squarely in second place. If they can keep their heads cool and not succumb to the pressure of knowing that they’re capable of doing much better than they have over the last several months, we could very well see them within the top three spots here. Of course it’ll take a lot of effort to get there right off the bat given their opponents in the first round, so they’ll have to make sure they send Among Us to the lower bracket before thinking about the Grand Finals.

Among Us are making a HUGE comeback in the tiebreaker, will they seal the deal? 👀👀

As for the rest, the pecking order is more or less what most expected. Adroit Esports, BOOM, and Neon Esports fill up the middle spots, while Cignal Ultra and 496 Gaming are now fighting for their tournament lives on the back foot. We expect BOOM and Neon to advance from the first round of elimination matches — but because this is a SEA tournament it’s difficult to say for sure. Stranger things have happened over the years in Southeast Asian Dota, after all.

Regardless, we’ll be here to cover the playoffs as always. Be on the lookout for our coverage of the knockout stage, and tune in with us on the official Beyond the Summit stream as the rest of the tournament unfolds!