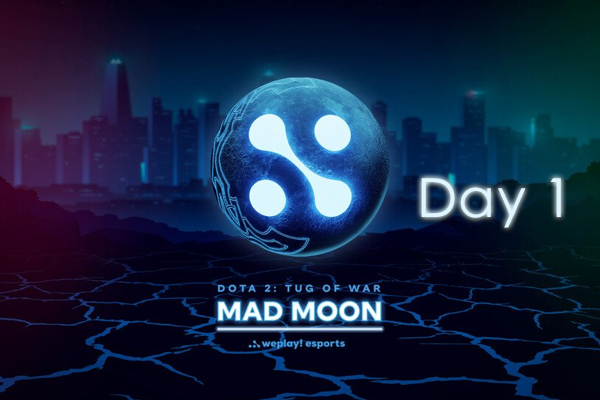 The WePlay! Dota 2 Tug of War: Mad Moon tournament kicked off in Kyiv with four interesting, and perhaps unexpected, matchups. Mad Moon is the culmination of a tournament series that began back in March of 2019. The event features four directly invited teams and four qualifiers.

To the delight of many, WePlay! Group A featured the long overdue reunion of Dota legends Puppey and Dendi. On opposite sides of the map this time, Puppey and crew dismantled the newly formed B8 squad behind overwhelmingly strong lanes in game one. Dendi rallied the troops for game two and B8 put up a much better fight, holding the net worth lead for much of the contest before running out of steam against Nisha’s mid Io. Games two’s wild finish gave Secret the expected but exciting 2-0 to start the day.

In the other Group A series, Gambit took on Infamous in a battle of teams with completely different rosters than they qualified with. The more experienced Gambit squad proved to be a step ahead of Infamous in both draft and play. They knocked the South Americans down 2-0 in a couple of quick and one-sided games.

In the Winner’s match for Group A, Team Secret solidified their prowess with a straightforward 2-0 of Gambit. Outdrafted and outplayed, Gambit will face B8 in the Decider match on Thursday while Secret moves on to the bracket semifinals with a perfect 4-0 record.

Group A ended with an elimination match between B8 and Infamous. Undaunted by their loss to Secret, B8 sent Infamous packing 2-0. The games featured some classic Dendi moments on Puck and his newest favorite hero – Mars. Despite the victory, B8 had some sloppy moments as to be expected from a new team and will have to step up their play to challenge Gambit in their final group stage match.

Group B proved a bit more evenly matched as Virtus.Pro took on an Aggressive Mode team that nearly qualified for the ESL Major in the stack European region. VP took an early lead in game one behind stellar drafting and a standout performance from Zayac on the Nyx Assassin. Game two proved to be a much closer and exciting affair as Aggressive Mode challenged VP every step of the way in a 74 minute game. That game alone saw tier five neutral items, level 30s and five different heroes eclipsing the 30,000 net worth mark.

Virtus.Pro finished the game behind in networth thanks to slightly better mobility and superior buyback management in a chaotic bonanza of a game.

Group B’s other series was the most interesting opener on paper. It pitted the Major attending Ninjas in Pyjamas against the fallen stars of Nigma. The TI9 runner-ups made short work of NiP in two one-sided matches that left many wondering whether the EU qualifiers for the ESL Major got something drastically wrong.

Virtus.Pro then faced Nigma in the Winner’s match in what proved to be a weird series. Going to the full three games, each match appeared nearly over from the laning stage as drafting dictated three consecutive stomps going 2-1 in favor of Virtus Pro. Nigma will now play again on Thursday while Virtus.Pro advance to the semifinals of the bracket stage.

In the final series of Group B, Aggressive Mode took revenge against PPD’s Ninjas in Pyjamas 2-1 for denying them a spot at the ESL LA Major in March. NiP have looked inconsistent with their new roster and though one might expect the team to relish a chance for some extra practice before ESL One, they clearly are trying to avoid revealing anything new. Meanwhile, Aggressive Mode has remained rather impressive for a newly formed squad of EU and CIS misfits. They move on to face Nigma on Thursday in another rematch from the ESL LA qualifiers where Aggressive Mode beat Nigma 2-0 and denied them a shot at the Major.

It was a busy, but smooth, day one of play and WePlay! continues to impress with the creativity and effort they put into producing events. Despite the eclectic roster of teams who ended up making it to Kyiv, the WePlay! Tug of War: Mad Moon looks to be an entertaining finale to the tournament series that began nearly a year ago.