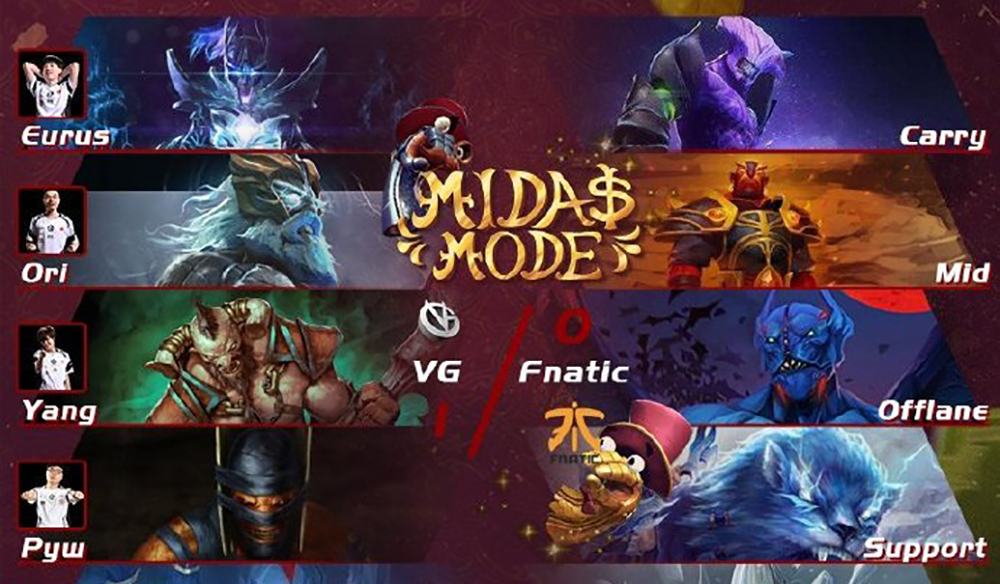 Fnatic had breezed to the finals, having demolished all comers during their domination of the group stages. Vici had been less consistent and looked to be evenly matched at times against previous opponents EHOME. Nonetheless, both teams were undoubtedly looking to prove they were the rightful kings of Midas Mode in Asia, especially after Fnatic 2-0’d Vici Gaming in their first meeting.

After their battle with EHOME in the semis, VG found themselves with limited funds, having spent a lot on securing victory. Luckily for them, Mr. Midas was kind enough to extend a special stipend to them, granting them several thousand additional Moonbucks to draft with. Rather than try and sustain this financial boon, Vici felt they would need to spend much more significant amounts on this draft, expending close to 2000 of their net worth on Witch Doctor, Sand King, Dark Willow, Puck and Medusa. Fnatic, for their part, went on a familiar-looking draft from their The International 2019 run, with an Enigma and Morphling combo.

Both teams attempted the early game bounties, with Fnatic all-chatting their intentions to smoke, take their courier to Roshan, and adding in some polite words. Unfortunately for Fnatic, their verbal kindness wouldn’t stop Vici Gaming from starting the early game pressure, with Nuengnara “23savage” Teeramahanon and Anucha “Jabz” Jirawong bullied in the bot lane. Elsewhere, Fnatic’s Kim “Febby” Yong-min headed into the jungle with his Enigma, looking to set up for his first Black Hole.

With the game progressing, VG’s plan became clear. Snowball the early lead, and never let their opponents get to their own late-game power spike. And Vici executed this perfectly, never losing too much in team fights, and concentrating on their mid-Medusa. With the team hitting their two-item timings on Willow, Medusa, and Sand King, they were able to push down mid at 20 minutes, taking a barracks. Apart from a few engages and the occasional pick, Fnatic was unable to stop their opponents, and eventually, Vici Gaming pushed in with their fed carries, taking game one.

Before the second game could start, a long delay emerged. It turned out that Vici Gaming had some demands. Given their time constraints, the team asked for the series to be reduced to a best-of-three, but also to be granted 3500 extra Moonbucks. This second demand was judged to be too much and rejected. Vici then asked if they could play Captain’s Draft, which again, rightfully, was denied. As tournament organizer Jake “SirActionSlacks” Kanner explained “rOtK is angry they are poor,” referencing Bai “rOtK” Fan, Vici’s head coach.

Finally, after much negotiation between Slacks and the teams, a resolution was achieved. One final game would be played, a best-of-one to decide the tournament winner. Entering the draft, Vici’s demands for Moonbucks seems unusual, given the team had a respectable 2500+ in their wallet, although Fnatic did have over double their net worth. Both teams went all in for the last game of the day, spending all but a few Moonbucks.

With no more games left, going for bounties was pointless. This didn’t stop Fnatic from using their copy-pasted spam in chat, which covered them for four separate bounties. Both teams came out swinging, grabbing kills across the map, although it was Febby and Fnatic who grabbed first blood. And like last game, Vici began to dominate their opponents in the bottom lane.

Unlike the first game, Fnatic was far more aggressive, often roaming into Vici’s jungle, and killing their cores from behind towers with impunity. 23savage, who’d been shut out for most of the first game, looked unstoppable on his Faceless Void, grabbing an early Black King Bar. After some indecisive skirmishing, Fnatic finally unleashed their real power on VG.

Fnatic tried to capitalize by taking Rosh, and forgot about it’s VR enhanced nature, and almost wiped. Luckily, this wasn’t enough to negate their advantage. Patiently waiting for their moment to strike, Fnatic grabbed some great engages, killing of VG’s cores, and pushing into their high ground.

As Vici Gaming attempted to come back into the game, they desperately attempted the Roshan, only for it to transform into the Super Roshan, and fend them off. For the most part, they were successful in repelling Fnatic, able to grab kills and force them away. But for Fnatic, the base was just too hard to crack. Vici’s Phantom Assassin could also delete Fnatic’s supports with impunity. Eventually, a mistake saw Nuengnara “23savage” Teeramahanon caught mid and killed, and on the subsequent push, Vici Gaming would push into the Radiant high ground and secure their win.

Vici Gaming are your Midas Mode 2.0 Asia champions, taking home US$22,000 in prize money, and leaving Fnatic with a $14,000 consolation prize.

Midas Mode 2.0 has been one of the most unique and entertaining tournaments Dota 2 has ever seen. Over nine days, we’ve seen teams disband and players switch sides. The tournament organizer was held hostage by the TI1 champions, and so many other incredible moments. But what’s more, we’ve seen players pick up heroes we don’t always get to see in major tournaments and do incredible things with them. And the Asia champions, Vici Gaming, have shown that they’re able to thrive in the chaos that is Midas Mode.