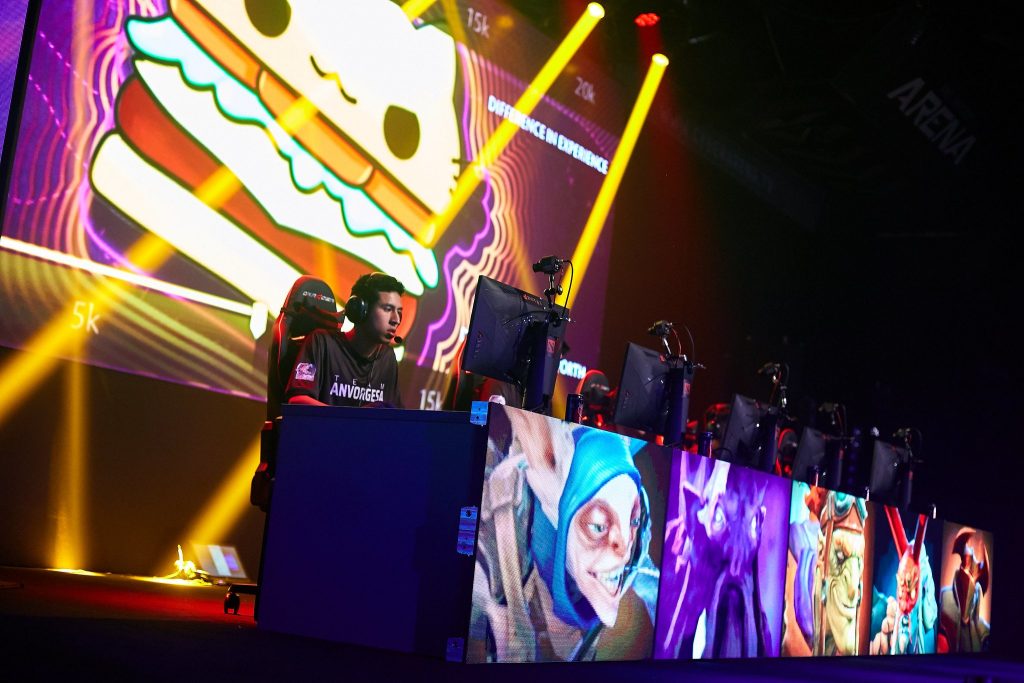 Our final match of day three of BETWAY Midas Mode 2.0 saw the transitional beastcoast roster taking on Team Anvorgesa in a battle of North American underdogs. Both beastcoast and Anvorgesa were suffering from shrunken wallets, having taken some losses early in the tournament.

Beastcoast, however, was undeterred, starting their draft with an expensive 172-Moonbuck Magnus, the Capri Sun and Gun Witch Doctor and Earth Spirit combo, attempting to out-pick their opponents. Anvorgesa shot back with a slightly expensive Slark and Bloodseeker combo, clearly looking to delete beastcoast’s heroes before they had a chance to act.

Capri-Sun 'n Gun is in the building! 🔫🧃 pic.twitter.com/oflEiacbxg

Before the match, we had been informed that teams were now able to purchase an “evil” creep buff from Sir Sadim. Evil, audience-controled minions who would cause havoc for your opponent. Yet despite this potential boon, no teams opted to pick up the creeps, and another of Sir Sadim’s plans was thwarted.

As the game started, we immediately had some action, as both teams met in the bot side river, in a clash that ended in a kill each for both teams. In lane, Anvorgesa quickly shot to an early lead, leveraging its top lane Tinker/Clockwerk combo into easy kills. But beastcoast shot back with a pair of kills in the bot, evening up the gold across the board. In fact, for much of the early game, these two teams looked incredibly equally matched.

But eventually, Anvorgesa started showing the kind of form that had served them so well during TI9, where the lineup had reached eighth place under the Infamous mantle. Showing near-perfect execution, the team dived their opponents, scoring a pair of quick kills.

Anvorgesa continued their assault, pushing into the Radiant side with ease. However, every time they were able to catch beastcoast, their opponents would salvage a return kill. In spite of this, by 20 minutes, Team Anvorgesa had a near 10k gold lead, and enough items to easily end the game. And while beastcoast were able to pick up some consolation kills, their loss was inevitable, even if they were able to drag the game to 30+ minutes. In the end, Jean Pierre “Chris Luck” Gonzales’ Slardar proved too much, and beastcoast fell in the first game.

For match two, beastcoast found themselves with a poor 312 Moonbucks, and as a result had to forgo any bans, and pick a full-on poverty draft, picking some of the mode’s cheapest heroes. Almost all their draft money was spent picking up the Batrider, which the team gambled it’s success on. Anvorgesa felt confident enough to drop over 500 Moonbucks on a counter draft, knowing that win or lose, they’d still have money to face J.Storm tomorrow. Their Axe, Warlock, Lycan, Abaddon and Oracle combo, looked like it would easily stomp the budget lineup of their opponents.

Bizarrely, the game started with beastcoast having a sixth hero. Production staff Aleksandar “bukka” Bukurecki briefly took control of Luna before the game was remade. Following this, though the game started in earnest, with beastcoast immediately attempting to cash in on Midas Mode bounties, by declaring their Dark Willow the VIP for the “Get Down Mr. President” challenge.

Initially, beastcoast looked sharp, with their Drow Ranger picking up early kills, and plenty of farm. The potential for a rapid snowball was there for the beastcoast squad, and as the lanes normalized, they picked up a number of kills. But almost as quickly as they’d grabbed the lead, they gave it away, as Adrian “Wisper” Cespedes Dobles began a rampage on his Axe. At eight minutes, the game had fully descended into a bloodbath, with a dozen kills on each side and neither team with a clear advantage.

That is until Anvorgesa’s Axe, Lycan and Warlock all reached critical mass. While the former-Infamous roster made some questionable decisions in deep-diving the Drow Ranger almost constantly, by 15 minutes, the team were pushing tier three towers.

Somehow though, beastcoast hung on, and their ranged carries slowly ramped up. Even with half their barracks missing, and the gold lead against them, beastcoast rallied behind Michael “ixmike88” Ghannam on his Bat Rider. And eventually, the team’s Drow Ranger, Dark Willow and Huskar all picked up kills, becoming practically unkillable themselves in the process. Finally, after 32 minutes of almost constant action, beastcoast edged out a win, snatching it from the jaws of defeat.

Having secured Moonbucks from their victory and by successfully picking up the the “Get Down Mr. President” challenge, beastcoast finally had the net worth to draft a more viable composition. And by picking up the Shadow Demon, and banning away several hard carries, including Timbersaw, Juggernaut and Lifestealer, they secured a good draft. Anvorgesa, for their part, picked up the Bloodseeker/Disruptor combo for the bot lane and a support Queen of Pain.

After a brief delay with another six-man team bug, the match kicked off with regular lanes, and a slow start to the action, especially compared to the previous games. That is, until Hector Antonio “K1” Rodriguez began to pop off on his Bloodseeker, diving bot and securing easy kills on the Keeper of the Light.

From there, Anvorgesa’s team echoed their first game performance. The squad quickly began to take control of the match, easily killing beastcoast across the map, and pushing into the tier two towers. Both Adrian “Wisper” Cespedes Doble and Jean Pierre “Chris Luck” Gonzales quickly caught up with K1, and after 42 kills and 25 minutes, beastcoast tapped out and called the GG.

After three games, Team Anvorgesa were finally victorious. Although they let the second match escape their grasp, overall the team performed incredibly well, making tomorrow’s clash with J.Storm a must-watch. With their loss, beastcoast will have to fight for survival against the Fighting Pepegas. The team showed remarkable grit in coming back in game two, clearly being able to play the low-value heroes when they needed to. But sadly, it just wasn’t enough. They’ll need a much better showing tomorrow to reach the playoffs.