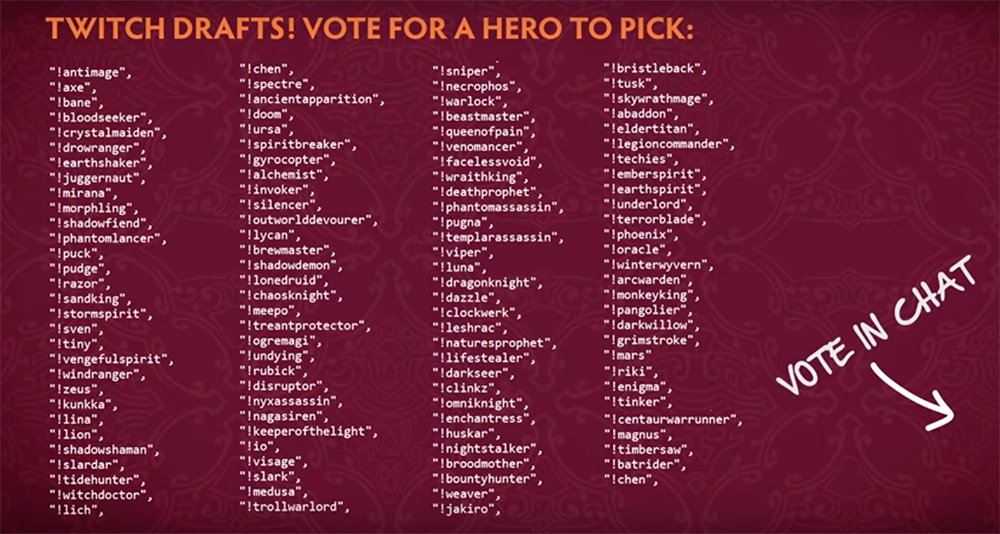 In the first series of BETWAY Midas Mode 2.0, Fnatic took the wins over Vici Gaming, perhaps in part due to the influence of Twitch chat.

Day eight of BETWAY Midas Mode 2.0 pitted Chinese powerhouse Vici Gaming versus the Southeast Asian titans of Fnatic. Both of these teams were undefeated heading into the evening’s games, and Fnatic would enter the draft with three times as much gold as Vici, having completed a host of bounties in the previous day of matches.

Given how capable the Asian teams had been in the first day of games, it was only natural that the second day would see the introduction of more difficult bounty challenges. Notably, we saw the return of the popular “Quack, Quack, Quack” challenge called “The Great Migration,” wherein a team must traverse the river, all the time quacking in all chat.

Heading picks and bans, VG opted to random their first pick to Twitch chat to give themselves a few more Moonbucks, and chat obliged them by gifting Vici Techies. Fnatic, not to be left out, also opted for a Twitch chat pick, receiving the Riki in return. And this trend continued, with both teams opting for chat picks in the next round, and the round after that, and eventually all their picks. The whole point seemed to be that the teams were prepared to throw the first game, picking random heroes, knowing they’d be able to get Moonbucks from bounties.

In game, VG’s Zhou “Yang” Haiyang started by trying to grab the Roshan damage bounty and quickly died to the beast. Luckily Xiong “Pyw”’ Jiahan did eventually succeed in the challenge instead. As lanes began, both sides showed how surprisingly competent they were with the all random heroes on every player. But as the match progressed, VG started to give up more and more kills, eventually finding themselves 2K behind in net worth only 10 minutes into the game.

And the problems continued for VG, as eight evil audience-controlled creeps, spawned at 12 minutes, trapping Zeng “Ori” Jiaoyang in his jungle. Ori eventually escaped, but almost had to teleport to avoid the excessive interference of the meddling minions.

Vici’s salvation came from slowing down the pace of the game and rushing an Aghanim’s Scepter on the Pudge. And with this, VG was able to pick up some kills and close the gap somewhat. However, the standout play from Kam “Moon” Boon Seng on Invoker was just too much to handle. Combined with the incredible amount of area of effect spells on Fnatic, VG couldn’t get anything going against their opponents.

Fnatic would struggle as they pushed into VG’s high ground, only able to take sporadic structures. They retreated, attempted some bounties and looked to pick of Vici’s heroes. Eventually, at around the 45-minute mark, Fnatic grabbed Roshan, denied their own Aegis to get the additional bounty, and then pushed into Vici Gaming’s base for the win, having thousands of Moonbucks in the victory.

Entering the draft for the second game, both Vici and Fnatic had vast quantities of Moonbucks. Yet both teams still opted to get Twitch Chat to pick their heroes. And in response, the expert panel began to feed terrible, and low-cost hero suggestions to Twitch chat, and vowing that for the next game, randomizing would be banned. As a result, both teams were left with some of the cheapest picks across the board. In desperation to prevent this chat pick tactic, Mr. Midas even hijacked the Hotspawn.com Twitter to avoid the Twitch selections.

HELLO THIS IS MR MIDAS.

FROM NOW ON, TEAMS AT MIDAS MODE INTERNATIONAL WILL NO LONGER BE ABLE TO ASK FOR A COMMUNITY PICK IF THEY CAN BUY A HERO

IF TEAMS RUN OUT OF TIME, THEY ARE AWARDED THE WORST HERO FOR FREE

THANK YOU AND ENJOY MIDAS MODE 2

Unfortunately, the chat picks had still granted Fnatic an incredibly strong composition, which included Enigma and Earthshaker. As the game started, Fnatic grabbed the “Dance with the Devil in the First Moonlight” bounty, and blocked Vici’s attempt of the “Run, Chicken, Run!” bounty, before moving into standard lanes. There, VG seemed much more comfortable, despite their draft being much worse on paper.

Evil creeps spawned into the game early and again wrought havoc on Vici, blocking Ori’s from his essential farm, although his budget Meepo build wasn’t helping either. Fnatic was once again able to push down the lanes with impunity, partially because of the great combo of Earthshaker engage into Enigma Blackhole. At least when Kim “Febby” Yong-min wasn’t picking up bonus bounties for casting his ultimate on creep waves.

At this point, Vici almost seemed to go crazy. Stacking in the river, the team blocked off an evil creep for revenge and practically suicided to the Earthshaker. Perhaps the squad trying to give Fnatic the “TI4 Style” bounty, which required winning a game in 20 minutes,  but ultimately it would take slightly longer, as Vici found themselves defeated in just over 22 minutes.

Fnatic dominated Vici Gaming in this series, partially because of getting better drafts from chat. The biggest win for Vici was the fact they’ve avoided losing any Moonbucks for the entire series, precisely because they gave all the picks to Twitch chat and achieved so many bounties. In their final game of the group stage against BurNIng’s Legion, the team will have an obscene amount of Moonbucks, and will hopefully pick up a win.