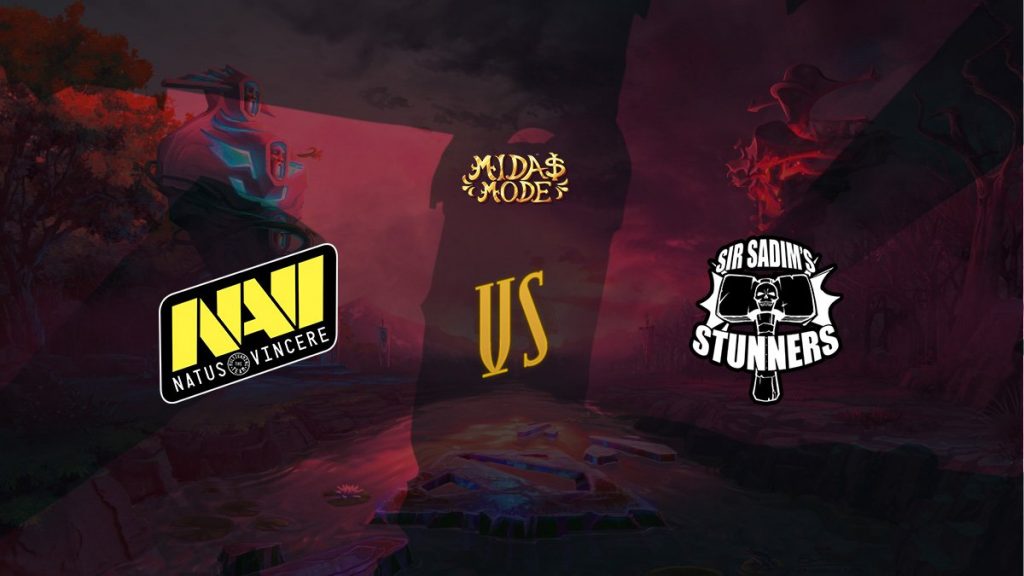 Day three of BETWAY Midas Mode 2.0 marches on, with the second contest pitting the previously victorious Sir Sadim’s Stunners  against Natus Vincere’s historic The International 2011-winning lineup. Before the game, Sir Sadim himself made an appearance to taunt and insult the panel, and reveal that the tournament was increasing its hero costs, namely having audience bans affect the price of heroes more quickly.

Stepping into the draft, the Stunners were confident in picking a rather expensive lineup, having built up an impressive 2,099 Moonbuck net worth. With this, they were able to pick up the early Kunkka, complete with his ESL outfit. However, Na’Vi’s TI1 stack was equally well endowed with cash and picked up the Bane, Lifestealer and the tournament’s first Brewmaster, complete with its Team Secret AFK Beer skin.

In game, Na’Vi grabbed the early runes, but couldn’t pick up any of the Midas Mode bounties. As the lanes settled, the Stunners’ heroes started to show their advantage immediately. Sir Sadim’s Stunners had some good momentum coming off their stomp of OG, with Na’Vi looking far less competitive compared to yesterday.

With Niklas “Wagamama” Högström’s Meepo getting his third clone at 10 minutes, the Stunners were able to start a snowballing lead, which built up slowly but surely. And while this was an intense and competitive game, with neither team attempting many Midas bounties, the Stunners always seemed to have the advantage.

Ultimately, the AOE from Sir Sadim’s Stunners proved too much, and sheer pushing power of the Meepo couldn’t be stopped. Even as Sadim’s team decided to slow down the game as it moved to 30 minutes, there was little the Na’Vi stack was able to do. Especially with the many Meepos able to almost instantly burn down the Super VR Roshan. After picking up an Aegis, the Stunners pushed into the high ground and put away Na’Vi for good.

Headed into game two, there was a slight delay as the Dota 2 client updated. And after this brief pause, Jake “SirActionSlacks” Kanner was presented with a cake to thank him for all of his hard work in the tournament.

In the draft, both teams went for very expensive team comps, both spending over 1000+ Moonbucks. From this, Na’Vi netted themselves a strong Kunkka, Ogre Magi (with Angry Green Swamp Man skin), and Beastmaster lineup, while Sir Sadim’s Stunners, picked up the Timbersaw, Night Stalker and Lifestealer. However, this left Na’Vi with a paltry 591 Moonbucks, while Sir Sadim’s Stunners were clearly in the lead with over 1,200 in the bank, win or lose.

Right before the game, we found out that Mr. Midas had for the second time today granted both teams a free Creep takeover, giving eight audience members the chance to help out either squad. As the match started, Na’Vi and Stunners brawled in the river before settling into standard lanes. Once against, Sadim’s stunners began to exert an early advantage, shooting to a 2k gold lead before five minutes.

With the raw power of the Timbersaw, Sir Sadim’s Stunners were able to proxy behind the towers, and scare off all of their opponent’s heroes. And as the game progressed, it looked like Na’Vi could do nothing to stop the onslaught of Sadim’s Stunners. But finally, after an over-commit in mid, the creeps who’d activated just minutes prior were able to bring their abilities to bear on the Stunners, catching out and killing the Timbersaw.

Unfortunately, it proved to be too little too late, as the Stunners, just like in the previous game, amassed a massive gold lead. And their audience controlled creeps were able to freely stack camps to generate even more farm for Sadim’s team. With a massive lead, the Stunners attempted to take the VR Roshan, only to find it transformed into Super Roshan at the last second, scrapping their take attempt, and sending them fleeing.

Eventually, the team attempted to take on the Super Roshan but was unable to defeat it, after two players where thrown from the pit. However, this attempt was all for naught as shortly after the game encountered some technical difficulties, and both teams disconnected. As a result of a crash, the game was lost and had to be remade.

And not one’s to waste an opportunity, Na’Vi attempted to right the wrongs of the previous game, picking up a pair of early kills. But as the game progressed, it seemed like Na’Vi were just too worn down to put up a decent fight, as Sir Sadim’s Stunners again took the lead. After a pause when Ivan “Artstyle” Antonov temporarily disconnected, the Stunners again grabbed a handful of kills, before finally, Na’Vi threw in the towel and called GG.

Sir Sadim’s Stunners have looked incredibly strong again, sweeping a Na’Vi TI1 stack that had seen a lot of success previously. Right now the Stunners are likely to head to the top spot in the weekend’s playoffs, having shown they have both one the best grasps of Midas Mode’s complex economy, and a team that’s able to execute on often usual or sub-par drafts.