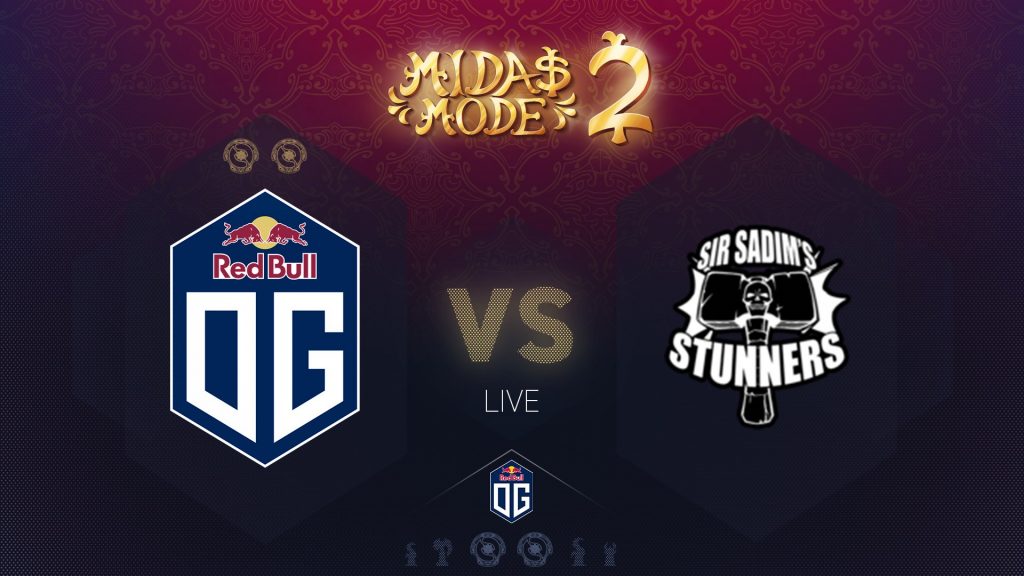 OG took on Sir Sadim’s team of stunning mercenaries, in a failing effort. (Image via Moonduck)

Day three of Midas Mode 2.0 kicked off in tremendous style as The International 2019-champions OG took on Sir Sadim’s Stunners. OG had been denied a series win yesterday against the classic TI3 Alliance and TI1 Na’Vi stacks, who handily handled the most recent International victors.

Perhaps sensing a need to attempt something drastic to win, OG challenged the Stunners to play without Naga Siren or Outworld Devourer, wagering 100 Moonbucks on their very own bounty. And in the first game, Sadim’s mercenaries took them up on the bargain. OG was once again competing with a stand-in: their coach Titouan “Sockshka” Merloz.

With this in mind, OG completely revamped their tactics, attempting a full creep/summons team composition, picking up Nature’s Prophet, Enchantress, Lycan and Beastmaster, seemingly hoping to overwhelm their opponents. And to further augment this tactic, OG even bought a creep takeover, banking on the Stunners being unable to handle their sheer numbers. OG also skipped bans to save money, looking to preserve their net worth, in sharp contrast to their opponents, who drafted more conventionally.

In game, both teams attempted to grab early VIP challenge bounties, before settling into standard lanes. After an initial set of kills in the bot lane by OG, the Stunners began to take over the game. An incredible over chase by OG ended with deaths and bounties on both sides, and the Stunners’ cores started to snowball, with Janne “Gorgc” Stefanovski chasing down and killing OG multiple times on his Bristleback.

OG’s summon-heavy lineup suffered helplessly against the more conventional team composition until creep takeover mechanic was activated. The eight audience-controlled minions made their presence known, pushing lanes, supporting ganks and stacking jungle camps. In particular, Topias Miikka “Topson” Taavitsainen benefited from his own creep entourage, who followed him around, and assisted in farming.

But still, the numbers advantage was not enough to put OG ahead. And apart from a brief team fight which resulted in both teams grabbing the “Press F To Pay Respects” bounty, OG looked helpless against Sadim’s Stunners, losing most engagements, and ultimately the game.

For the second match-up, OG retained their no ban strat, and bizarrely, gave away all their money in a perhaps ill-advised act of philanthropy. As a result, Twitch chat took over their draft, breaking out the Invoker, Canadian Chicken Skywrath, and Riki. Meanwhile, Sadim’s Stunners, bolstered by their win, splurged on the expensive Tiny pick. OG also attempted to buy another creep takeover, but due to their bankrupt status, were unable to.

However, shortly before the match started it was revealed by Mr. Midas himself that both teams had been granted a free creep takeover. Sir Sadim’s Stunners rejected the kind offer, perhaps dubious of the value, so OG was again gifted eight creeps. As the game began, the Stunners started by grabbing an easy “Dance with the Devil by the First Moonlight” bounty, followed by WehSing “SingSing” Yuen picking up a pair of kills on his Mirana.

As the match progressed, the draft which Twitch chat had so generously picked for OG started to show some flaws. The Stunners were able to easily grab kills across the map and rocketed to an 8K gold lead. After 11 minutes, OG’s audience-controlled creeps finally spawned, although it may have already been too late. Two were instantly killed by Troels “syndereN” Nielsen on his Winter Wyvern, as the Stunners ruthlessly chased down and murdered all but three of the audience-controlled minions.

With Sadim’s mercenaries in firm control, they started using the deadly power of the VR-controlled Rosh to attempt to grab easy kills. Ultimately, OG proved unable to pose a real threat to the streamer led team, who wrapped up the game in under 30 minutes, after a rather one-sided 15-72 kill stomp.

After three series, OG is now broke. Apart from a small influx of money for losing the game, they have no Moonbucks, which is just as well, as they have now been eliminated. Sir Sadim’s Stunners, on the other hand, have performed far beyond expectations. This mercenary corps of elite Dota players look poised to steal the tournament away from the professional teams, as per Sadim’s plans.