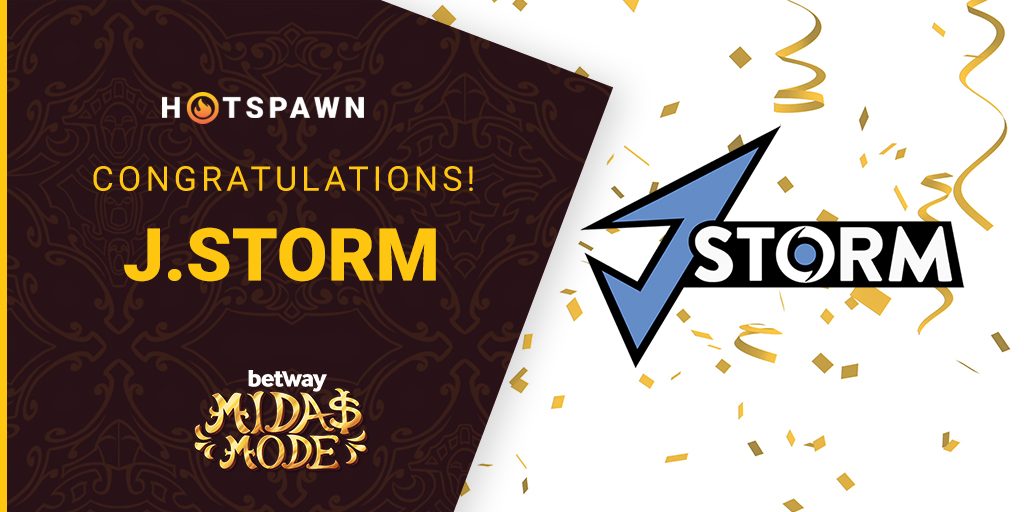 J.Storm surged to victory in the Americas finals.

Our second finals of BETWAY Midas Mode 2.0 pitted North American powerhouse J.Storm versus the South American Team Anvorgesa. Both teams had something to prove, as J.Storm were narrowly eliminated from WePlay! Reshuffle Madness just a day ago and Team Anvorgesa wanted to show they were still the same caliber of team that had reached The International 2019.

With just over 1000 Moonbucks to their name, Team Anvorgesa spent over a third of their gold on the Silencer and then relied on the fickle nature of Twitch chat for their other picks, giving them Clinkz, Meepo, Tiny, and Techies. J.Storm, with the massive amount of money they’d earned from going undefeated in groups, picked-up a brutal looking draft, with Mars, Tidehunter, Earth Spirit, Nature’s Prophet and Dark Willow.

With their carry Tidehunter, J.Storm sprinted into the Roshan pit to grab the “A Game of Chicken” bounty. However, Adrian “Wisper” Cespedes Dobles on his Techies instantly sniffed it out, chasing down the courier and grabbing the snipe. With their Meepo, Silencer lane, and Techies/Tiny top, Anvorgesas had to give up farm and were at the mercy of J.Storm’s aggression.

That combo looked so good for J.Storm, but it doesn't end well!

With this aggression, J.Storm won every lane. But even with a kill lead, J.Storm was falling behind to Anvorgesa’s big farming champs. The Meepo, the Clinkz, and even the Techies were ramping up. As much as J.Storm could kill any of them individually, in team fights, Anvorgesa started to win.

Luckily for J.Storm, they were able to regroup, and because of their heroes raw power, could win team fights and grab even more kills. The problem was, if the team committed on any of Anvorgesa, the members not in the fight would simply take structures. Once again in the tournament, the incredible pressure of Meepo and a fed Clinkz was brought to bear, as Anvorgesa deleted all of J.Storm’s barracks.

But somehow this wasn’t the end for J.Storm. Even with Anvorgesa’s incredibly fed Meepo, the team fell. Perhaps because of J.Storm’s evil creeps, or maybe the ridiculous power of the Tidehunter and Mars’ AOE, the North American team was able to conquer their South American foes in the first game.

Anvorgesa, unfortunately, was left with a tiny amount of Moonbucks and had to throw themselves at the mercy of Twitch chat again. And as a result, Disruptor, Shadow Fiend, Clockwerk, Necrophos and Riki. J.Storm, evidently sensing a game three, went for a much cheaper draft, with a Luna, Brewmaster, Drow Ranger, Visage and Queen of Pain.

As the second match started, Hector Antonio “K1” Rodriguez was able to grab first blood and get his lanes off to an early lead. But quickly the game swung towards J.Storm again. Unwilling to give up this series, Anvorgesa doubled down, reacting to J.Storm’s aggression with rotations, and evening out the game. With a balanced amount of gold split between both teams, Anvorgesa were able to grab an edge due to their raw talent.

When evil audience-controlled creeps spawned for both teams, the momentum swung further towards Team Anvorgesa, who by this point had a modest, but respectable gold lead. And with the lead, the squad began pushing in on J.Storm, demolishing their towers and starting to siege the high ground. But a single misplayed fight led to the deaths of three members of the Catburger team, and J.Storm headed for Roshan.

Only a clutch Super Rosh purchase saved Anvorgesa, who had nearly thrown the game away. The game then settled into another round of farming, with teams periodically picking up kills, but unable to gain much ground. Neither side seemed able to push into the high ground, nor could they catch more than one or two members of a team out.

Anvorgesa’s 10k gold lead, especially, felt like it wasn’t helping them as much as it should. As a result, their win took an age to materialize, slowly taking apart their opponent’s base building by building. Apart from almost throwing the game away on two or three occasions, on plays like a poorly executed Super Roshan take or a fountain dive, Team Anvorgesa were able to secure the victory after 45+ minutes. And the winners even took the time to pause and flame in all-chat as they won.

Despite their terrible draft and start, Anvorgesa outfarm J.Storm and build a huge gold lead!

Looks like they'll take this game against all odds! pic.twitter.com/kf1Vq0QHnU

For game three, Anvorgesa had secured several bounties, increasing their Moonbucks, and giving them a good chance of closing out the series. And J.Storm, having been beaten by the Twitch Chat draft, decided to embrace it themselves, being gifted the Pudge, Io, Ogre Magi and Kunkka picks, and rounding their comp out with their own. Meanwhile, Anvorgesa, was far more cautious, only allowing three of their heroes to be picked by the chat.

In game, the lanes again started bloody, and stayed bloody, with both teams willing to fight and die across the map. Heroes from both sides facilitated this high-paced style, with Io and Slark both able to make diving towers easy. Only when Anvorgesa began to be blighted by the evil creeps purchased by J.Storm did a lead start to appear, with the NA team getting slightly ahead. This lead eventually snowballed, aided by the evil actions of the audience controlled minions, and even with Jean Pierre “Chris Luck” Gonzales on his signature Slark, J.Storm clutched out the win to push the series to match point.

In what had the potential to be the final draft of the match, Anvorgesa had no Moonbucks left and was entirely at the mercy of Twitch chat. And J.Storm, perhaps looking to flex on their opponents, allowed the chat to pick their heroes as well. As a result, Anvorgesa ended up with Witch Doctor, Tiny, Sniper, Huskar and Ursa, while J.Storm grabbed a carry-heavy draft.

With the games looking like they were heading the distance, Anvorgesa had to sub in Jesus “Ztok” Carhuaricra, a DPC-banned player from Peru, and gave their newest member Twitch chat’s questionable Ursa pick. And as the match progressed the fatigue started to show – the series had been going for almost five hours at this point. J.Storm though, clearly had more gas in the tank, as they quickly shot to an eight kill, 2k gold lead in the opening minutes.

This relentless opening transitioned into a long and drawn-out game with back and forth between each team. But ultimately it would J.Storm’s far better composition of dangerous carries that would take the win, pushing into Anvorgesa’s base with impunity.

This was an incredibly evenly matched series, which bodes well for a J.Storm team hoping to perform in this upcoming DPC series. They’ve defeated an International qualifying team, and even under Midas Mode’s unique rule set, they did so in convincing fashion.