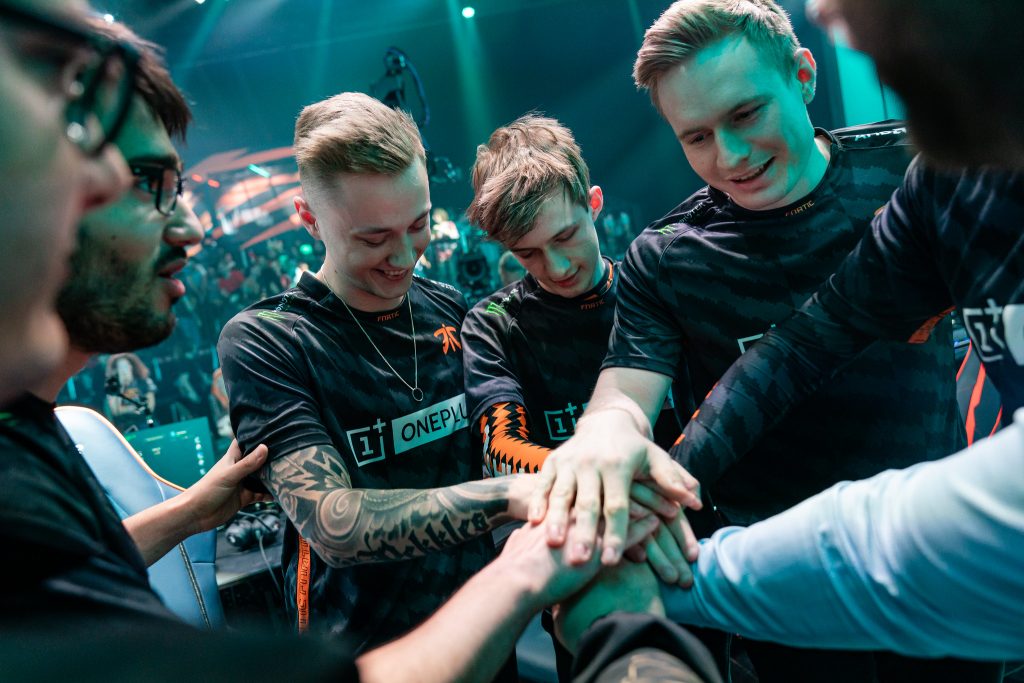 The battle between undefeated Fnatic (second in our LEC Power Ranking) and defending champions G2 Esports is sure to come down to the wire in LEC 2019 Summer. Image via Riot Games.

We’re approaching the League of Legends European Championship’s fourth week, and the picture of the Summer Split is beginning to form post-Rift Rivals success for EU. The league boasts two near-unstoppable pacesetters in Fnatic and G2 Esports, and a mix of teams within a single win of each other in the playoff battle. The question is, who really are the best teams in Summer, and who have a chance at qualifying for the region’s home-based World Championship at the end of the year? Below are our LEC Power Ranking heading back into the league’s regular season.

Unfortunately for Excel Esports, there’s no place in this list for them right now except last. Their winless Summer has seen them become the whipping boys of the European Championship, and at this stage, only an outrageous reversal of form will be able to push Excel back into the mix for playoffs this season.

There is a glimmer of hope for the squad who seem destined to go from ninth in Spring to tenth in Summer. The organization originally put their faith in returning bot laner Petter “Hjarnan” Freyschuss and veteran support Raymond “kaSing” Tsang. Three weeks in, Excel turned to Jesper “Jeskla” Klarin Strömberg and Patryk “Mystiques” Piórkowski, who have looked good since subbing in ahead of the league’s bye round. If they can settle in quickly, Excel may have a chance to at least avoid the org’s first last-place finish in the new Championship.

Rogue started well in Summer, looking to explosive promoted rookies like Emil “Larsson” Larsson and Kacper “Inspired” Słoma for a 2-2 opening record for their Split. A rough three-game losing streak has left the roster dawdling near the bottom of the standings, but with how close the race for playoffs will be, they’re not out just yet.

That said, Rogue are missing that X-factor in the squad to push them over the line. The teams above them all have proven talents that can take hold of games by themselves, and Rogue are just missing that in their team in Summer. Rookie stars like Larssen and Inspired may have that in their wheelhouse as they settle into the league, but so far they haven’t shown the same instant impact that some new European faces have shown in the past.

Rogue are looking to rookie talent in Summer to try and break into the league’s top six. Image via Riot Games.

Misfits Gaming are in an interesting place right now with their 2019 campaign. Their roster is full of world-class proven stars like Paul “sOAZ” Boyer and Steven “Hans Sama” Liv. It seemed like they’d found their rhythm with new signing Thomas “Kirei” Yuen in the jungle. That proved not to be the case, however, as the squad hooked Kirei again for Nubar “Maxlore” Sarafian and were whacked with a 0-2 weekend.

There’s something wrong behind the scenes for Misfits right now. Scrim problems, practicing or just not being on the same page for the veteran lineup means they are a slim chance of even being in the running for playoffs if they can’t fix something soon. Adam “LIDER” Ilyasov has come into the team in a commanding mid lane role, but Misfits may have the same problem as Rogue – if it takes a while for LIDER to adapt, the season may be over.

We come to the last of the 2-4 teams, but find Team Vitality in a different place to Misfits and Rogue. The French organization had a horrendous start to the split with back-to-back 0-4 weekends, before a 2-0 ahead of the bye rounds may have got the former World representatives back on track. There’s a lot of potential for Vitality to surge back up the standings if they have clicked over the break.

For Vitality, flying under the radar may be a benefit for the squad. The 0-4 record immediately saw other players, teams, and pundits on the LEC broadcast write them off. That can work in their favor, especially as bot lane carry Amadeu “Atilla” Carvalho hits a purple patch of form. With their ADC firing on all cylinders, and Italian wildcard Daniele “Jiizuke” di Mauro ticking back into shape in Summer, Vitality don’t deserve to be quite so low in the standings – expect fortunes to change for the team as the split rolls on.

SK Gaming slipped into playoffs in Spring with a 9-9 record, and have again found themselves just on the edge of the top six nearly halfway into the European season. Their inability to crack the upper echelons of the competition will be the team’s downfall, especially with rookie of the split Oskar “Selfmade” Boderek not on the same warpath he was in his debut season in the LEC.

SK may have it in them to stay in the playoff scrap as the year continues, but with Vitaly improving behind them, and Rogue and Misfits just one good week away from finding their “click” moment, the German organization may find themselves punted from the top six before they know it.

After a mixed opening to their Summer Split, Origen have had a confidence-boosting trip to Los Angeles that may just boost them right back into the battle for the top three. Right now they’re lagging behind Splyce and Schalke when it comes to synergy on the Rift, but Origen certainly has it in them to surge higher as the Split continues.

Origen’s next two opponents – Excel and Rogue – offer them a chance to get ahead of the mid-table battle with a 2-0 weekend, but the jetlagged hangover that often comes with a mid-season international trip may be a slip-up that Origen aren’t ready for this round considering many in the team’s playing roster just played their first international event.

Origen’s problem may also come in the fast-paced nature of the meta at the moment. Their methodical playstyle worked well against the paced and thoughtful playstyles of teams like Team Liquid and Team SoloMid, but with Europe pushing the package for speed on the Rift Origen may be left behind. The Spring runners-up need to adapt or be left behind.

Origen have found themselves in a mid-field battle in LEC 2019 Summer. Image via Riot Games.

Splyce have again done what they seem often to do in Europe – slip straight into a top-seed spot ahead of the pack. The Vipers clocked up a 2-0 weekend ahead of the bye round to cement their third place with a 4-2 record, and now have an opportunity to wave away SK Gaming’s challenge for the spot first off the bat this round.

While their ascent may have been silent, it’s not like Splyce didn’t earn their current spot in the playoff race. The roster has won four of their past five, only falling to FC Schalke 46-minute, 20-15 epic that was marred by a struggling 1/9/7 performance by Marek “Humanoid” Brázda on Irelia. Kasper “Kobbe” Kobberup finished 10/2/4 in the same game on Ashe, and their second defeat shows Splyce the way forward – once again, the Vipers will be putting their faith in their franchise player to lead the way in Summer.

The German-based organization appearing above Splyce despite being below them in the standings may be a small shock, but Schalke’s schedule has not been kind to them. The boys in blue have already faced off against last season’s second and third-placed teams in Origen and Fnatic, and slipped into the mid-table mix off a poor run against SK. When push came to shove, Schalke were able to defeat Splyce (4-2) in Week 2.

Apart from G2 Esports second this weekend, Schalke have an easy run ahead of them to pick up a head of steam. They face Rogue when the league returns, and then face Vitality and Excel in Round 5 ahead of key battles with Splyce and SK. The team should be able to pick up at least a 3-1 record in the next fortnight, meaning their confidence will be soaring when they battle two of their playoff contenders for a spot in the top three.

It’s hard to deny that G2 Esports are one of the best teams in the world at League of Legends right now. They’ve now won back-to-back international events in the Mid-Season Invitational and Rift Rivals, but there’s been a small glitch in the system for the roster. Right before travelling to Los Angeles, G2 fell to arch-rivals Fnatic to lose the top spot in Europe. Then, the team went 2-2 against the NA representatives at Rift Rivals.

These aren’t results that mean G2’s dynasty is over before it’s ever really got rolling. Instead, it appears they just have some things to work through before Worlds. The team had a troubled period at the end of Spring that saw them lose to Fnatic in the ‘Match of the Century’, and they went on to sweep Team Liquid 3-0 to lift their first international silverware. G2 will be back to fighting fit by split’s-end, it’s just a matter of how strong they’ll be on the other side.

G2 Esports are playing catch-up in Summer after losing to Fnatic in Round 3. Image via Riot Games.

With the best record at Rift Rivals, and an undefeated run in Summer greeting them when they return to the European Championship regular season, Fnatic are certainly in control of their own destiny right now. They take the top spot in this LEC Power Ranking. The 2019 Worlds runners-up had a difficult Spring as they welcomed Tim “Nemesis” Lipovšek to the roster and missed playing in the final. This season there’s been a totally different change. Nemesis has been perhaps the best mid laner in the league, and jungler Mads “Broxah” Brock-Pedersen has been in MVP-form since Week 1.

Fnatic seems to be on a warpath back to Worlds at the end of the year. They may be missing Rasmus “Caps” Winther, but with their upswing in form while G2 fall behind, many are suggesting Nemesis’ controlled carries may be an upgrade over the coin-flip nature of Fnatic’s former star. If any team wants to prove that they’re up to the challenge of playoffs, they’re going to have to knock Fnatic over. For now, at least, Fnatic are title favorites.