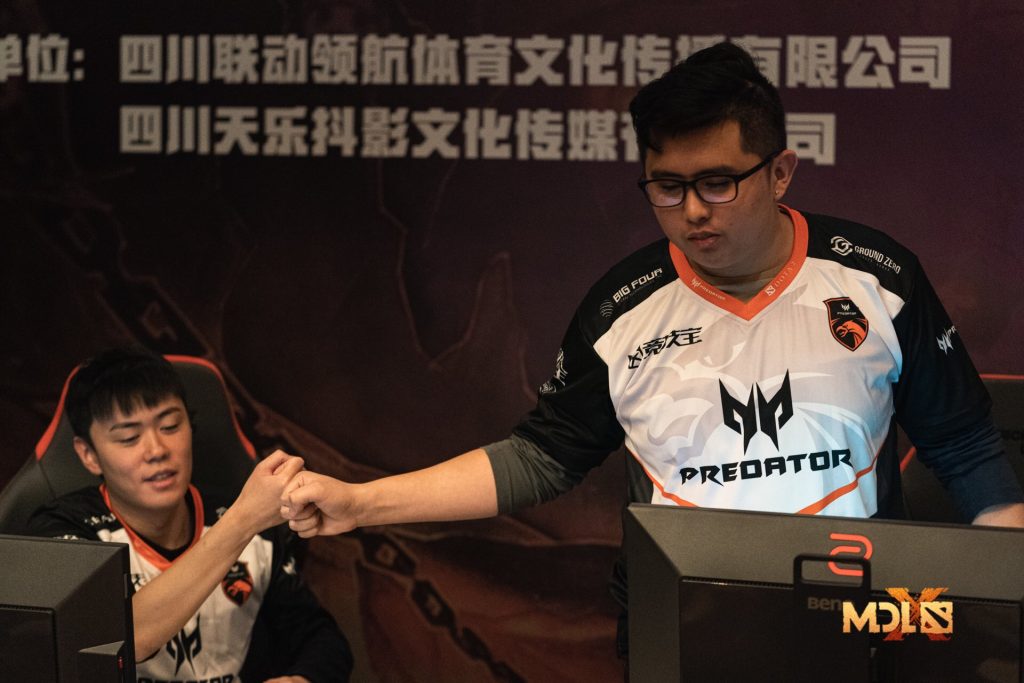 TNC Predator has a lot to celebrate, having taken one step closer to the Grand Finals (Photo via Mars Media)

Groups are over and the MDL Chengdu Major’s playoffs are in full swing as teams battle it out in the first Major of the Dota Pro Circuit 2019-2020 season. After starting strong, Team Liquid fell to the lower bracket almost immediately, having lost to underdogs J.Storm. In comparison, TNC Predator is still dominant and surged past Alliance to reach the next stage. On top of this, we saw four teams eliminated in what’s been an incredible day of professional Dota 2 action.

Our first day of Playoffs started with TNC Predator attempting to continue their undefeated run at the tournament, against an Alliance stack that narrowly missed topping their group. We expected a very competitive series and weren’t disappointed.

In game one, TNC drafted a nuke-heavy comp with some solid carries on the side. However, against Alliance’s Nikolay “Nikobaby” Nikolov, and his top-notch play on Night Stalker, TNC looked helpless. TNC attempted to slow down the game and drag things out, but eventually, after almost 70 minutes, Alliance secured the win.

Looking to shut down Nikobaby, TNC opted instead to draft harder carries in different lanes, rather than ban the Night Stalker outright. And in both of their next two victories, Armel Paul “Armel” Tabios, and Kim “Gabbi” Villafuerte carried their team to victory with their individual performances, leaving Damien “kpii” Chok as food for Nikobaby. Alliances primary carry still picked up an impressive amount of kills, but in the end, it wasn’t enough to save Alliance from falling to the Lower Bracket.

Some more 📸 snaps from earlier's match here at the #MDL Chengdu Major. Can we get some 🧡🧡🧡 for the hottest dudes?#StrongerTogether#SummonYourStrength pic.twitter.com/kqqGjvTZ1z

In the next series of the day, Team Liquid squared off against J.Storm in match the former was heavily favored to win. In the first game, that prophecy seemed to come true, with TL defeating J.Storm thanks to their Faceless Void/Ancient Apparition combo. But as the second game got underway, it became apparent that J.Storm’s second-place exit from Group D was no fluke. The team dismantled TL in decisive fashion, sending the European hopefuls to the Lower Bracket. Provided both TL and Alliance win tomorrow, we’ll now be set up for the much-vaunted clash between the “old” Alliance roster and the new.

Our first elimination game was one of the more one-sided matches we’ve seen. EHOME’s defeat at the hands of the Fighting PandaS during group stages was perhaps not the best indicator of the team’s talent, as here they looked incredibly strong. The team dismantled Team Spirit, sending them home as the first elimination of the tournament.

Unfortunately, #MDLChengdu is over for us at this moment. GG, WP @EHOMECN.

Next up, Team Aster faced Gambit. Gambit has seemingly gone into a tailspin since their fantastic performance at ESL One Hamburg. Nowhere was this more evident than in their unceremonious exit from this tournament. Try as they might, the CIS hopefuls were just no match for their Chinese opponents, and the team crashed out of the event as our second elimination.

In the penultimate game of the day, Fnatic redeemed themselves after a disappointing group stage. In a close game against Team Unknown, Fnatic was obviously pressed at every objective. And although their score lines on Tiny and Timbersaw tell a story of domination, the trouble they had breaking the high ground of their opponents was surprising. Fnatic will have to play cleaner Dota to escape this Lower Bracket.

Finally, in our last game of the day, it looked like we were in for an upset, as Team Adroit sped to an early lead thanks in no small part to their fed Alchemist. But beastcoast’s cores just wouldn’t say die. And 38 minutes in, Adroits lead didn’t matter anymore. After some incredible fights, beastcoast cut their opponent’s lead down from 15k gold to only 7k, and continued to whittle them down, eventually winning 48 nail-biting minutes. Considering Adroit’s substantial early lead, with beastcoast at one-point down over 30 kills, this was one of the most amazing performances we’ve seen from Hector Antonio “K1” Rodriguez, Jean Pierre “Chris Luck” Gonzales, and Adrian “Wisper” Cespedes Dobles. beastcoast continues to be one of the most exciting teams to watch in the entire game.

What an incredible comeback from @beastcoast who turned the series around against Adroit. Unfortunately, this is it for the Filipino-based team, but the adventure continues for the South American boys who will face the loser of VG vs FP this Wednesday.#MDLChengdu pic.twitter.com/EVI8o7oF2a

Ultimately, it’s been an exciting start to the MDL Chengdu Major Playoffs. We’ve watched a few upsets and some very impressive performances. Although Team Spirit, Gambit Esports, Team Unknown, and Team Adroit are now leaving, they’ve netted themselves $12,500, and 100 Dota Pro Circuit points each. As we advance in the tournament, it will be exciting to see which teams can make it further and grab a bigger handful of those precious DPC points. The MLD Chengdu Major continues until November 24 and can be watched on the Beyond the Summit Twitch channel.