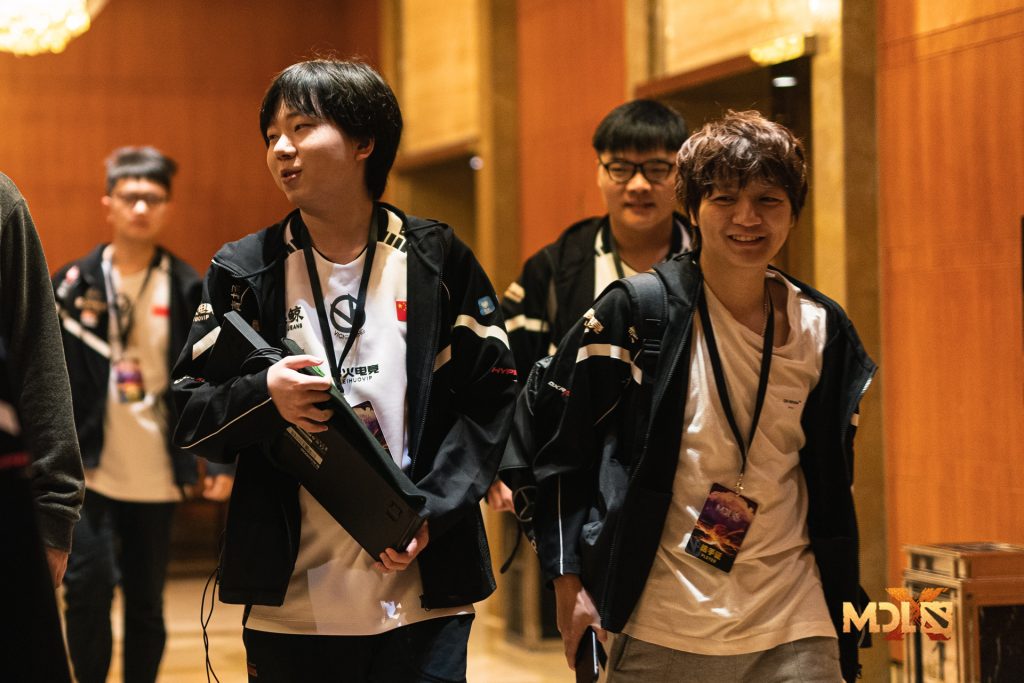 It’s our second day here on the main stage of MDL Chengdu Major 2020, and although we started the day with five teams, after just three series, we’ve seen that whittled down to our final trio. Starting the day was J.Storm and Invictus Gaming, both battling to survive and face a potent looking Evil Geniuses squad later in the day. Meanwhile, TNC Predator faced Vici Gaming, in the climactic Upper Bracket Final.

But as always this tournament, we were first treated to yet another edition of Good Morning Purge with Kevin “Purge” Godec. In this edition, Purge treated us to a story and taught us how to sleep on an airplane. He also helpfully informed us which seats are best for doing so (essential info for globe-trotting Dota fans and players alike).

Chengdu Major Opening match: Summit champs back at the peak

The opening match pitted J.Storm versus Invictus Gaming. North America has had a resurgent tournament so far, with two teams in the top five. Now it was J.Storm’s chance to make that two teams in the top four. iG, on the other hand, were out to prove there’s more than one dominant force in Chinese Dota.

As game one started, it looked like they would do just that. Helped along by questionable decisions by J.Storm, Invictus claimed the first game in short order, with their opponents never looking like they could muster a defense. In particular, the Alchemist pick for J.Storm didn’t go anywhere. A huge shame when this hero has been so strong for other teams in the tournament.

The epicenter on rosh 🤔 #MDLChengdu

For game two, J.Storm fell back on a tournament favorite pick: The Night Stalker, pairing it with a slightly unusual Jakiro pick. Invictus Gaming countered with a very traditional looking draft – lots of carrying potential, and plenty of catch. And with this composition, iG was able to carry out a very clean looking victory, leaving J.Storm to depart this tournament in disappointing fashion.

The question on everyone’s lips this tournament has been, “how do we stop TNC Predator?” Prior to this series, the team had dropped just a single match, to the now eliminated Alliance. Arguably TNC has had a reasonably easy trip to this Upper Bracket Final, especially considering where the teams that opposed them were later eliminated. In essence, Vici Gaming was the team’s first real challenge, and finally, TNC’s wings were clipped by the dominant hometown team.

Game one was a stomp. There were almost no signs of the insatiable force that TNC had been earlier in the tournament. Faced with a Puck/Faceless Void combo from Vici Gaming, the team folded, as Zhang “Eurus” Chengjun landed Chronosphere after Chronosphere on his helpless opponents.

For game two, TNC dug in their heels. Keeper of the Light has been a solid counter to area of effect ultimates and wombo combo compositions this tournament, with his mass of crowd control abilities able to mitigate a lot of damage. And for game two TNC broke out the old man Ezalor to try and slow down VG. What ensued was a grinding, painful matchup between two teams desperate to cling on to upper bracket status. Armel Paul “Armel” Tabios desperately attempted to carry on his Templar Assassin, but once again, the Faceless Void proved too much. After an incredible run, TNC fall to the lower bracket, while Vici are our first finalists of the tournament.

Ouch, what a loss for @TNCPredator. It was their game to lose – a bad fight and @VICI was able to turn the tides. Vici takes the series 2-0 and are the first team in the Grand Finals!

TNC isn't out yet – they're dropping to the lower bracket finals! #MDLChengdu pic.twitter.com/sGGq44pP2Q

Back to the lower bracket: EG crash out

There was potential for an upset whoever won this series. Evil Geniuses have performed far beyond all expectations of this tournament. They’re the team everyone thought they had the potential to be. And yet iG, are also massive tournament favorites. After cruising to victory at DOTA Summit 11, it’s surprising they even find themselves in a lower bracket spot.

However, for the first game, iG still had momentum. Unlike Team Liquid yesterday, who looked exhausted in their second series of the day, the iG seemed empowered by their double stack of games. In the first match, the team looked convincingly strong, out-drafting their opponents and setting clear win conditions: Protect Zeus, win the game late. By the time EG could rally a defense, Zeus’ ranged nuke was just too potent.

SO much damage from Emo on Zeus! ⚡⚡⚡@invgaming win all lanes and take game 1 vs EG in a huge upset! #MDLChengdu pic.twitter.com/thKiJAt9Nt

For game two, EG went with an almost identical draft, clearly believing the Zeus pick was their sole downfall. And their insight seemed correct. With their ranged nuke banned away, iG lost in lanes and was forced onto their high ground. But EG wasn’t confident enough in their pushes. They lost fights across the map and almost threw the game on several occasions. Finally, though, the team pushed in and secured their win.

In the decider, iG came out swinging. All of EG’s hard work was for naught as their Chinese opponents breezed past with an all-new decisive draft. Not even solid laning performances from EG’s cores could limit iG’s success, as they took the series and headed to the semi-finals.

With our last three teams confirmed, tomorrow we’ll find out just who faces Vici Gaming in the finals, and our eventual MDL champion. J.Storm is headed home with $60,000 and 900 Dota Pro Circuit points, while EG have picked up $80,000, 1350, and a huge berth in the DPC standings. The MDL Chengdu Major wraps up tomorrow, and all the action can be caught on the Beyond the Summit Twitch channel.