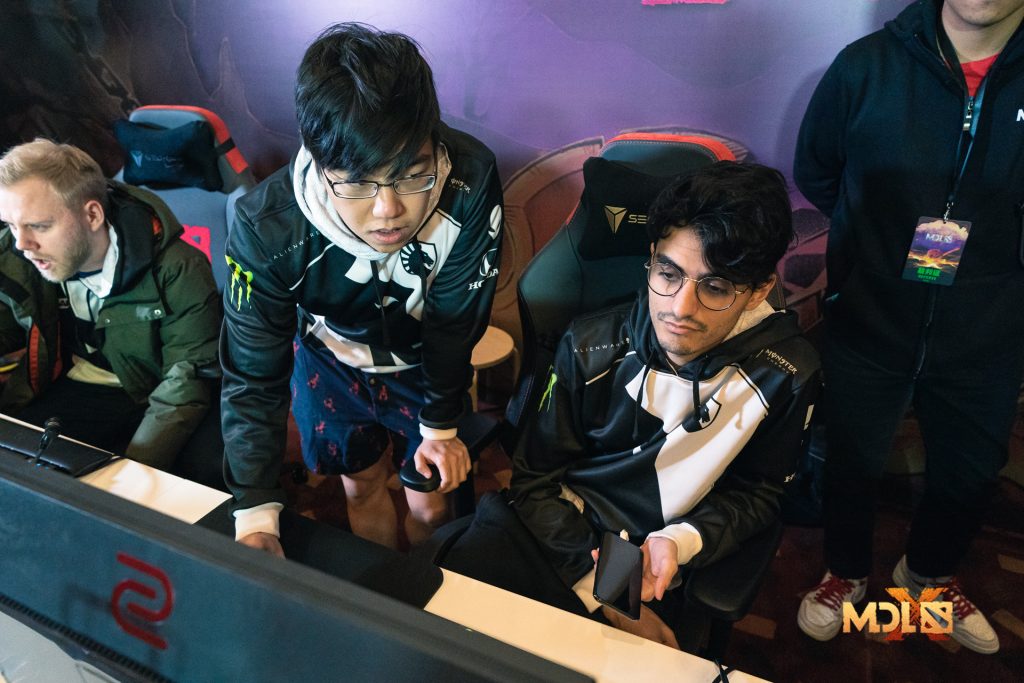 Team Liquid looked sluggish in their second series of the day, falling out of the MDL Chengdu Major to Evil Geniuses (Photo via Mars Media)

After a brief break yesterday, we’re back at the MDL Chengdu Major, the Dota Pro Circuit’s first Major of the season. Team Liquid took on a grueling schedule on Friday, facing off in the highly anticipated match against Alliance, before battling for survival against Evil Genius. Meanwhile, Invictus Gaming had to attempt to desperately hold off the insatiable force of beastcoast.

But as ever, before all this, Kevin “Purge” Godec was on hand to wish us a good morning, and teach us some valuable life tips, joined today by Grant “GranDGranT” Harris. This time, how to heat up pizza from the night before!

Team Liquid started the day with something to prove. The stack was facing their former organization, the same one that had decided to part ways during contract negotiations. For TL, this wasn’t just an elimination saving series; it was a chance to prove they’d have been worth the price tag, more than their replacements.

And prove they did, but it wasn’t the clean-cut victory they’d perhaps have wanted. In game one, the TL struggled to put away Alliance, as the team held on again and again. The score line wasn’t close, but in the match Alliance exposed one of TL’s biggest weaknesses. This stack just doesn’t know how to break high ground. And so Alliance were able to limp to a 50-minute loss, in a game that should have been over in just 30.

Game two was a more decisive showing. But perhaps cautioned by the almost-throws of the previous match, TL took things incredibly slow. By the time Tommy “Taiga” Le could blink in with his Lion without being punished, it was clear the match was over. Alliance crash out of the tournament, after a series of standout games from their cores. TL advanced, but would have to play more decisively to defeat Evil Geniuses later.

Two games down, and we continue our march through the lower bracket in Chengdu 😎

We return to the stage in just a few hours to take on EG, thank you for your support so far. 💪💙#LetsGoLiquid pic.twitter.com/l4Iwiiiibx

Next up was Invictus Gaming taking on beastcoast. The Chinese DOTA Summit 11 winners have had an unorthodox path through the tournament so far, but they’re still hanging in. Their opponents, on the other hand, now had the weight of their entire region on them, with the rest of the South American DOTA scene collapsing around them. And with this responsibility, beastcoast came out swinging, clocking iG in the jaw in a nail-biting first game. Once again, it was Hector Antonio “K1” Rodriguez insatiable farming that caused havoc for iG, and the SA team claimed victory in a close clash.

In game two, IG was not going to let K1 farm again. They absolutely trashed their opponents mid laner, not letting him or his squad have anything. This brutal affair felt like it was over quicker than the draft, and before beastcoast knew what was happening, we were in game three. But this is where beastcoast made their stand. The team once again leaned on their star carry K1 and fed him every resource they could. They funneled everything into Hector and took a massive lead against iG. But it was not to be. After a disastrous backstab attempt, iG seized control and ran into beastcoast’s high ground to secure the come-from-behind win.

THE COMEBACK IS REAL! 😱 #MDLChengdu

It looked terrible for @invgaming but turned out so well! pic.twitter.com/A00FTql9uj

A heartbreaking loss for beastcoast, after a truly stellar performance. There is no doubt we’ll see more of this team in Dota Majors across the season, as they continue to shock and upset top teams from across the world.

Having just vanquished rivals Alliance, Team Liquid now faced Evil Geniuses in another battle for survival. And sadly, the team did look tired. In their third and four games of the day, the stack was sluggish, and their drafts matched this change in pace. Game one’s attempt at a wombo combo composition was counted by EG’s Keeper of the Light, and game two didn’t go much better.

EG’s Abed “Abed” Azel L. Yusop had standout performance in game one, grabbing the MVP with his 19/2/12 performance on Storm Spirit. The second game spelled a stronger start for Team Liquid. But the team was always one item behind their opponents. TL’s cores needed gold, and every time they went to farm, they found themselves killed for it. EG was just playing faster Dota. And they wrapped up the second game in a smooth 35 minutes.

After four days of playoff action, Alliance, beastcoast, and Team Liquid have now been eliminated, leaving us with just five teams remaining. Alliance and beastcoast head home with $40,000 and 450 DPC points, while TL grabs a nice $60,000 and 900 points. These next few days are crucial. We saw last year that often a top-4 finish in a single Major was enough to give you a shot at The International. These final five teams have everything to play for in the last two days.

The MDL Chengdu Major 2019 continues until Sunday, November 24. Keep up with all the action on the Beyond the Summit Twitch channel, and stay tuned to Hotspawn for more Dota 2 news.