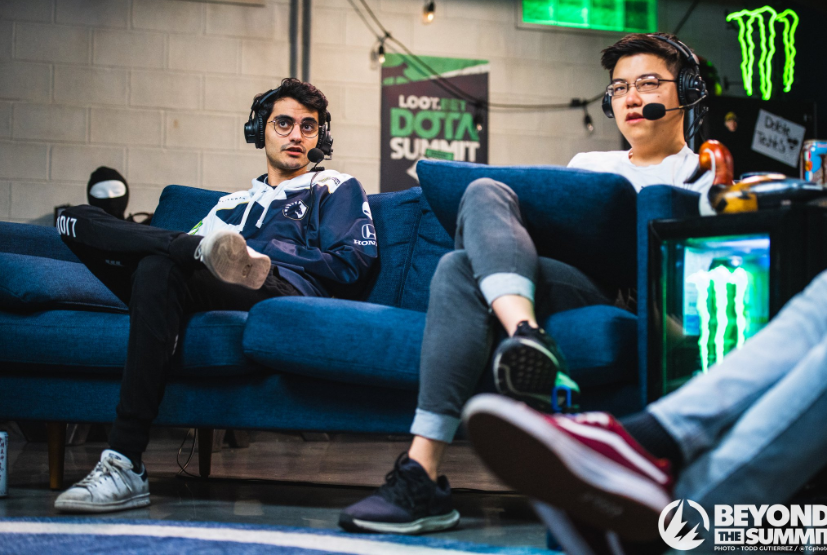 (Photo courtesy Beyond the Summit)

Beyond the Summit snagged the opportunity to summon top tier talent to their flagship tournament series as teams congregate in Los Angeles for the upcoming DPC Major. With three Major attending teams and three other big name organizations there are some really interesting dynamics going on for such a small scale tournament. Day one has already provided plenty of surprises and bodes well for the remainder of the LOOT.BET Dota Summit 12.

Fnatic were graced with the opportunity for a quick day one at the Summit house. Having only two best of twos to play on day one, they made quick work of both Team Liquid and the newly formed Cloud9 roster.

It's a 5 man wipe for @FNATIC after an incredible Echo by DJ at #LOOTBETDS12!🤯

Fnatic looked to be in Major-ready form, easily outclassing their opponents enroute to four wins in 30 minutes or less. Their drafting was strong, the play was clean and the flashiness Fnatic fans have come to expect was on full display. Fnatic looked scarily good on day one, anchored by the stable carry play of 23savage, the team’s youngest player.

The sheer playmaking ability of this SEA all-star squad is remarkable. When they play without fear, this looks like a team that could challenge anyone in the Dota-verse. Past iterations of Fnatic have routinely struggled to put it all together on LAN so we won’t call them Major winners just yet. Fans of the team though should feel emboldened about their chances of success at ESL One: LA.

Since the international ascension of Beastcoast to an internationally viable team, the rest of South American Dota has become somewhat of an afterthought. The Peruvian veterans of Thunder Predator provided the region with some intrigue this last qualifier cycle, however, when they bested Beastcoast to claim the number one seed out of South America.

Thunder Predator have a lot to prove on the big stage so it’s good to see them taking every opportunity to practice against good teams. Widely regarded as the Summit’s weakest team, Thunder Predator played a strong but inconsistent day one. After splitting the opening match against OG.Seed, the Peruvians were trounced by Evil Geniuses. They rallied for the final series of the day and put on a clinic against Cloud9, finishing the series with a merciless kill discrepancy of 66-18 over two games.

Thunder Predator were clearly outclassed by Evil Geniuses and they face both Fnatic and Team Liquid on day two. If they can put together a couple wins against these strong opponents, the South Americans will advance to the playoffs and head into the LA Major with some decent momentum.

Evil Geniuses entered day one of the LOOT.BET Dota Summit 12 as the odds on favorite to win the event. In typical EG fashion they fell victim to greedy drafting and well executed aggression from OG.Seed in game one to begin the day with a loss. Unphased, however, the North American powerhouse adjusted and outplayed the OG academy squad in game two. The course correction persisted into their second series as EG demolished Thunder Predator in two games that barely reached the 20 minute mark.

Evil Geniuses face the tougher part of their group stage on day two with three best of twos against Team Liquid, Cloud9 and Fnatic. The boys in blue seem to be treating this tournament as a warmup event for the LA Major and aren’t pulling any punches thus far. EG has historically been a slow starting team at major events so it should be interesting to monitor how they perform with several official matches just days before the Major kicks off.

Barring any crazy upsets, EG should safely make the playoff stage of the Summit and are still on track to contest for the title. The series against Fnatic on day two should provide a preview of the potential grand finals contest.

Day one of the LOOT.BET Summit 12 was not a great day to be a fan of Cloud9 Dota. The triumphant return of North America’s favorite second place team was cut abruptly short by two quick defeats at the hands of Fnatic. Cloud9’s day didn’t get much better from there as they fell 2-0 to a Team Liquid squad that looked out of practice otherwise. The disappointing LAN debut of the new Cloud9 finished with an absolute trouncing at the hands of Thunder Predator in a series where C9 looked completely outclassed in nearly every aspect of the game.

While this is the first tournament for the newly shuffled roster, it is hardly the start an experienced crew of players would hope for. Cloud9 are clearly still finding their identity and have the talent at least to put up some good performances in the future. Day two’s redemption arc will pit the team against Evil Geniuses and OG.Seed in what would have to be a miraculous story line to avoid being eliminated from the event.

Since signing the former Alliance roster, Team Liquid have been hot and cold. It was revealed by coach Blitz, that the fate of the team tends to go with the amount of practice games they are playing at the time. Beginning the tournament against Fnatic is no easy feat, but it’s clear that Liquid is nowhere near Fnatic’s form currently. After casting several games on the Summit couch, Insania and crew returned to action against Cloud9 in a relatively one-sided series.

Team Liquid finished the day by dropping two games to OG.Seed in one of the most exciting series’ of the day. As it currently stands, Liquid are on the outside looking in at the playoffs and will need a bit of help plus some wins to avoid elimination. Partially, we hope they do get eliminated so that viewers get to spend some extra time on the couch with one of Dota’s most personable teams.

.@qojqva1 to the left. Our performance today on the right. Sorry @BuLbaDotA_ for this tweet pic.twitter.com/4Fz4lpavRx

When OG.Seed were initially signed by the two-time TI winning org, it ignited a lot of questions and expectations. Clearly a team in development, the roster struggled to find consistency in the initial qualifiers and minor tournaments. Despite the backing of Dota’s most prestigious team, it was unclear whether the brand’s success would ever take root in team number two.

Day one of the Summit 12 has been a pleasant surprise for fans of the OG brand and the Seed players. Starting the day by splitting a series against Evil Geniuses shocked a lot of viewers and showcased a new level of coordination and clarity of purpose in the OG.Seed roster. The inconsistency crept back in during their second series against Thunder Predator but Seed finished the day strong with an exciting 2-0 over Team Liquid.

OG.Seed currently finds themselves in second place of the group stage standings and are all but guaranteed to advance to the playoffs. The competition at the Summit is definitely high enough for fans of this team to get a bit excited about their future prospects, especially with the stabilizing support of the OG brand. We’re all around excited to watch what could be an amazing case-study in supported player development.

Beyond the Summit and their Summit tournament brand always brings the goods when it comes to entertainment and the 12th iteration continues that trend. With big names, exciting games and plenty of gags in between, the LOOT.BET Dota Summit 12 is shaping up to be the perfect warm up tournament for the ESL LA Major for fans and players alike.