Mac: “Head Coaching Wasn’t Something That I Was Actually Interested In” 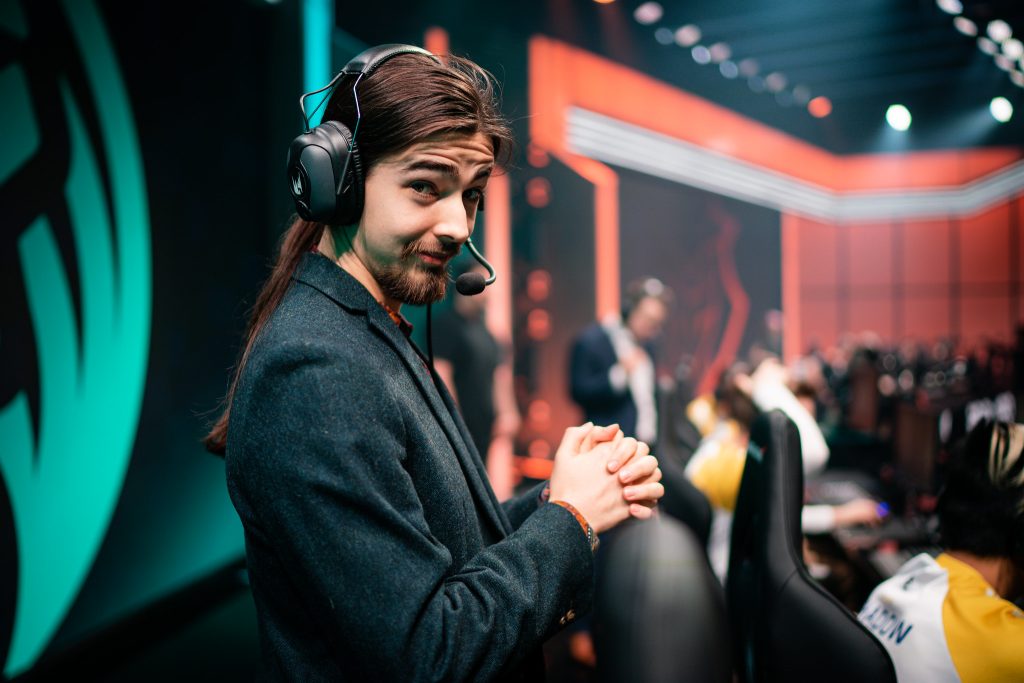 Mac wasn't originally interested in being Head Coach until the opportunity came up. (Photo courtesy Riot)

People were skeptical of MAD Lions when they first announced their starting roster for the League of Legends European Championship 2020 Spring Split. Helmed by the only holdover from Splyce’s 2019 roster (which MAD Lions re-branded from) and Coach James “Mac” MacCormick, mid laner Marek “Humanoid” Brázda, four rookie talents were thrown into the fire to test their skills against their region’s best. They exceeded all expectations in the regular season, and shut up the haters for good by handing G2 their first domestic series loss in the first round of playoffs.

The young MAD Lions players have their own hard work and skill to thank for their third place finish in Spring, but that win was a culmination of some very deliberate decisions made by people behind the scenes leading up to this point.

We were able to speak with MAD Lions’ Head Coach Mac about his background developing solid infrastructure for players, how he’s implemented these things within MAD Lions, and his deep history with scouting talent in Europe.

Hotspawn: With Splyce, you were Head of Player Development. A bit of an odd role we don’t get a lot of insight into. What exactly did you do?

Mac: Basically what it means is my job was to make sure that the organization and the rest of the coaching staff was as prepared as they could possibly be for everything. That includes player scouting, interviewing people, keeping an eye on long-term talent. That’s very offseason and big picture type work. Day-to-day, it was very much a lot of individual coaching, a lot of support work. I was very much filling in all of the gaps whenever it was necessary. If any of the other coaches didn’t have time for something, or if they didn’t have the ability to coach a certain role to a very high standard, or if there was a player that they had more difficulty dealing with or needed more time investment than a Head Coach has, then that’s what I would deal with.

I always viewed my job [as being] to make [ex-coach Hadrien “Duke” Forestier’s] life as easy as I humanly could.  A lot of one-to-one coaching and other stuff like that, as well as being a foil for Duke and a wall to bounce ideas off of. We prepped all of our drafts together, we did a lot of scouting together, going and watching other teams’ games. 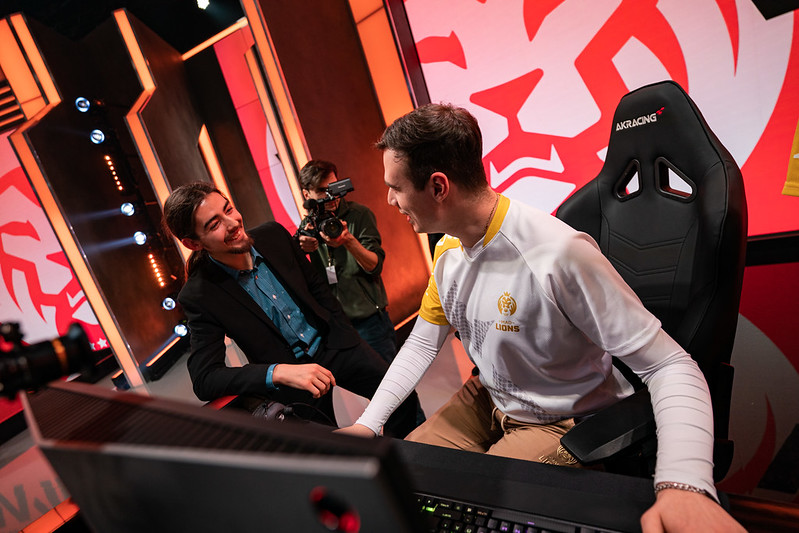 Hotspawn: So was the amount of versatility required in a role like this what got you transitioning into a Head Coach role? Or was that always the goal for you?

Mac: I wasn’t thinking about being a Head Coach really until the opportunity came up this split. I was actually pretty happy continuing what we were doing. So I have a pretty unique situation in that I have some pretty annoying long term injuries to my hand. Repetitive strain injuries that have turned into a nervous/sensitivity-type condition, so I have a lot of trouble using a PC actually. There’s a bunch of videos on it that we made last year on Splyce, but basically I have special software that helps me use a PC properly. I use a mouse with a camera that tracks my face and clicks when I smile. I have dictation software that helps me type so I don’t have to use the keyboard and mouse myself essentially.

“Head Coaching wasn’t something that I was actually that interested in.”

Sitting down for a long period of time, staying still, using a PC intensively is something that puts a strain on my system and ends up causing pain, and that pain is increased with more stress. Being at the helm and being responsible for everything is obviously a high-stress thing, and that’s not a role that I felt that I could fulfill with the way that I currently was. Head coaching wasn’t something that I was actually that interested in. I was really happy to just stick alongside Duke. We had a lot of conversations about sticking together as a duo for a long time because we really liked working together and I think we balanced out a lot of each other’s strengths and weaknesses. So I was happy to just stay a Strategic Coach forever. There was even an offseason where we literally interviewed for every single job together and advertised ourselves as a duo. So it wasn’t something that I was particularly looking into, but the opportunity came up with MAD this year because [Peter Dun, Head Coach of MAD Lions’ League of Legends Division] was staying on as well. Peter is kind of in a transition phase as a coach where he wants to move slightly away from being so hands-on and solely performance focused and be more involved with the organization. Peter right now does a bit of everything: coaching, a lot of talks with upper management, he manages the Academy team. He’s our “big picture coach” and technically he’s Head Coach for the League of Legends division, whereas I’m the Head coach of the LEC team; it’s a bit of a distinction.

Last day of groups for us- wish us luck Europe! #Worlds2019 🐍🐍🐍 pic.twitter.com/vRz2S4WrXO

I started out being really specialized as a coach. Most League of Legends coaches are self-taught and I self-taught myself through the framework of being a jungler. I didn’t really know how to coach many other roles, but I understood jungle pathing and I understood getting vision and things like that pretty well, so that’s where my foundation came from. I branched out from there and used to do a lot of one-to-one coaching. In all the teams that I’ve coached, the model there was very one-to-one heavy.

“I find that it’s very easy to stagnate as a coach if you’re not really involved in the small technical details.”

I made sure to do in-depth reviews and one-to-one feedback sessions with every single player, which is not something that many coaches have time to do really. So that was the way that I built up into it and I guess that background is something that I just enjoy doing a lot. I find that it’s very easy to stagnate as a coach if you’re not really involved in the small technical details. [With] all these other factors that evolve so quickly in League of Legends, that ability to be hands on in a very detailed way is, I think, super valuable.

Hotspawn: Would you say MAD is ahead of the curb significantly in EU when it comes to support staff and overall infrastructure around coaching and other resources for players?

Mac: Hugely. I think we have such a huge edge over a lot of other teams. I think the fact that we’ve invested the way we have into support staff means that we can get things out of players that otherwise wouldn’t be able to necessarily compete at a high level. Look at some of the narratives around some of our players before coming into the season. A lot of LEC teams turned [Zhiqiang “Shadow” Zhao] away because he was a choker, or he didn’t communicate, or whatever the hell. I think it’s completely ridiculous and I have no idea how people managed to think that about him because coming into day one on MAD Lions we were sure that he was going to be insane.

“As a team we have a responsibility to our players to manage their levels of stress.”

But I think that when you have such a high pressure environment and such a young player coming into this “all eyes on you” type of environment where social media is going crazy and you’re generating all of this hype, there’s all of this pressure and expectation on you. People are comparing you to these well-established players and asking you all these questions like “will they make it?” or “will they challenge the top?”. That’s a huge amount of external pressure to be on a player and I think the environment that we’ve cultivated in MAD Lions means that we can help players to succeed despite that [pressure] where other teams might not be able to.

I don’t know. Choking or being overwhelmed? That’s essentially a stress thing. And as a team we have a responsibility to our players to manage their levels of stress. That’s one of the absolute most important things you can do as a competitive team. I often like to say that the teams who hate each other the least and haven’t imploded, yet are usually the ones that succeed. Half of the teams in the league are either just zombies crawling across the finish line. Mentally and physically and emotionally they are just drained. So that level of stamina is something that we can compete with most teams on despite having players that are young and exposed to all of this stress because we have the setup that we have.

After hearing the details of the personal coaching history of Mac and how his philosophy has laid the foundation for MAD Lions’ player support infrastructure, Mac explained how the 2020 MAD Lions roster came to be. In part two, Mac gives us a deeper dive into his expertise around player scouting and the lineup’s formation.