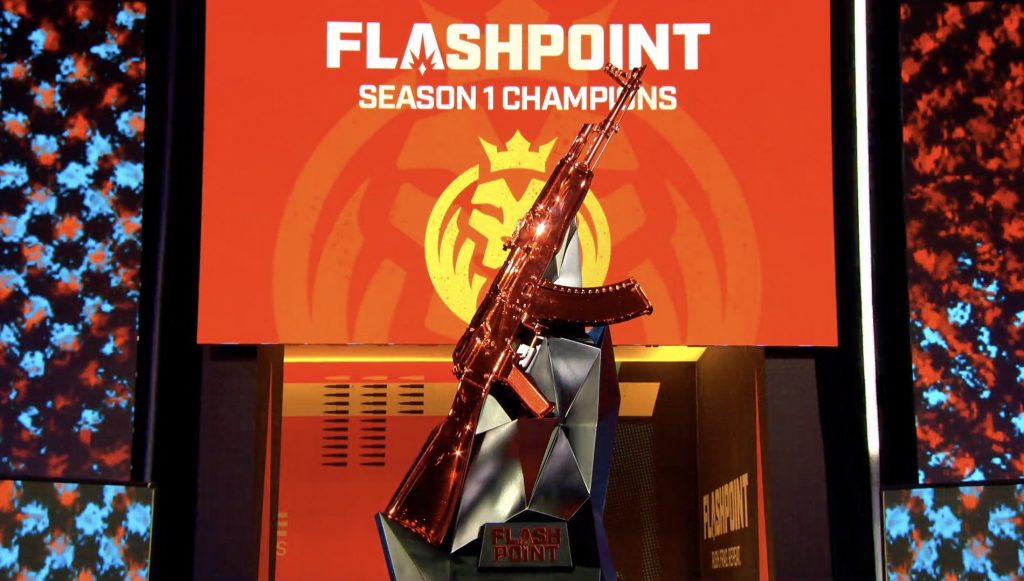 MAD Lions have claimed first place at Flashpoint and the $500,000 that goes with it. (Photo courtesy Flashpoint)

Flashpoint’s inaugural season has come to a close. This past month was full of interesting Counter-Strike action. In the end, MAD Lions have come out on top and earned the Flashpoint trophy and a whopping $500,000 prize.

MAD Lions and MiBR came into Flashpoint playoffs as the only two teams who won both of their group stage brackets. As such, they were placed on opposite sides of the bracket with their first potential meeting of the entire event being in winners’ finals.

MAD Lions’ first two matches were against the North American squads of FunPlus Phoenix and Cloud9. Although they won both matches 2-0, they had a 16-14 map against FPX and a 25-23 triple overtime win against C9.

MiBR on the other hand never found a 2-0 victory. Instead, they dropped maps to every team they played. Against Orgless in round one, MiBR lost Overpass in overtime 19-17. Their next match versus HAVU saw the Brazilians lose map one then barely scrape back on Dust2 with a 19-17 of their own. Regardless of how, MiBR did enough to make it to the winners’ finals.

The giants of Flashpoint finally met after being on a month-long collision course. The matchup was interesting because of MiBR’s need to ban Nuke. MAD Lions had a few options, but ultimately decided to ban Vertigo. MiBR came in with the Train pick while MAD took Mirage. The aim heavy Dust2 would be the tiebreaker map.

On Train, MiBR jumped out to an early T side lead despite losing the pistol. MAD then took advantage of the CT sided map to bring the score back in their favor at the half 8-7. Now on the defense, MiBR was able to stonewall the Lions out of both bombsites to win six of the first seven rounds. MAD Lions took four rounds back, but the MiBR lead was insurmountable. Map one went to MiBR 16-13.

Now on MAD’s Mirage pick, they looked much more prepared. After going down 0-3, their T side got to work. They took round after round, building up a 9-6 lead at the half. Despite MiBR taking the first five rounds of the second half, MAD’s defense was unbreakable once they got set. Seven straight rounds ended the map 16-11 for the Lions.

Dust2 was set up to be an exciting, action packed tiebreaker. However, the series would go out with a sputter. MiBR won most of the aim duels they took on the map. The Brazilian’s T side went up 10-5, the biggest halftime lead in the match. MAD Lions couldn’t find any success on their T side, going 0-6 and losing the map. MiBR had earned a grand finals appearance.

MAD Lions vs MiBR: The Rematch

After sweeping HAVU in the losers’ finals, MAD Lions were back for one more shot at MiBR. Despite the map bans and MAD’s Mirage pick being consistent, MiBR opted into Inferno over Train. In the past three months, Inferno is MiBR’s most picked map and MAD Lions’ least picked. This adaptation forced MAD Lions to let either Dust2 or Train through, both of the maps they lost in their first meeting with MiBR. Train ended up being the final map.

Mirage was very competitive the whole way through. MAD Lions secured a decent T side start with a 7-4 lead, but MiBR won the last four rounds in a row to win the half. After the side swap, the teams kept trading short bursts of rounds never exceeding three. Ultimately, MiBR kept their lead until the end, stealing map one 16-13.

MAD Lions now needed to win a map they’d only played once in the past three months. That prospect looked possible after the first half where MAD Lions toon an 8-7 lead from CT side. Despite winning the second pistol round, MAD Lions couldn’t continue the success against MiBR’s defense. However, MAD Lions bounced back with five straight T side rounds of their own. After taking two of the last four, MAD succeeded in sending the series to a third map 16-13.

They weren’t out of the woods just yet. The final map was Train which MiBR won five days prior. To those who watched the matches live, MAD looked dead on arrival. The heavily CT sided map proved incredibly difficult for the Lions to find any successful attacks on. Round after round went MiBR’s way as they took a 12-1 lead. MAD did crucially find the last two rounds of the half, but at a 3-12 deficit, the Lions were on life support.

As it turned out, MiBR were the ones who needed the ambulance. In the five-day break between the two matches, MAD’s Train CT side went from winning less than half of the rounds to winning all but one of them. This impressive turn around saw the Lions win 13 of the 14 rounds in the half to secure one of the most outrageous comebacks of the year.

Flashpoint 1 was nothing if not entertaining. Even if the quality of Counter-Strike wasn’t always the highest, the way that production was handled certainly has a place in the scene. Hopefully they can come back even stronger in their second season.