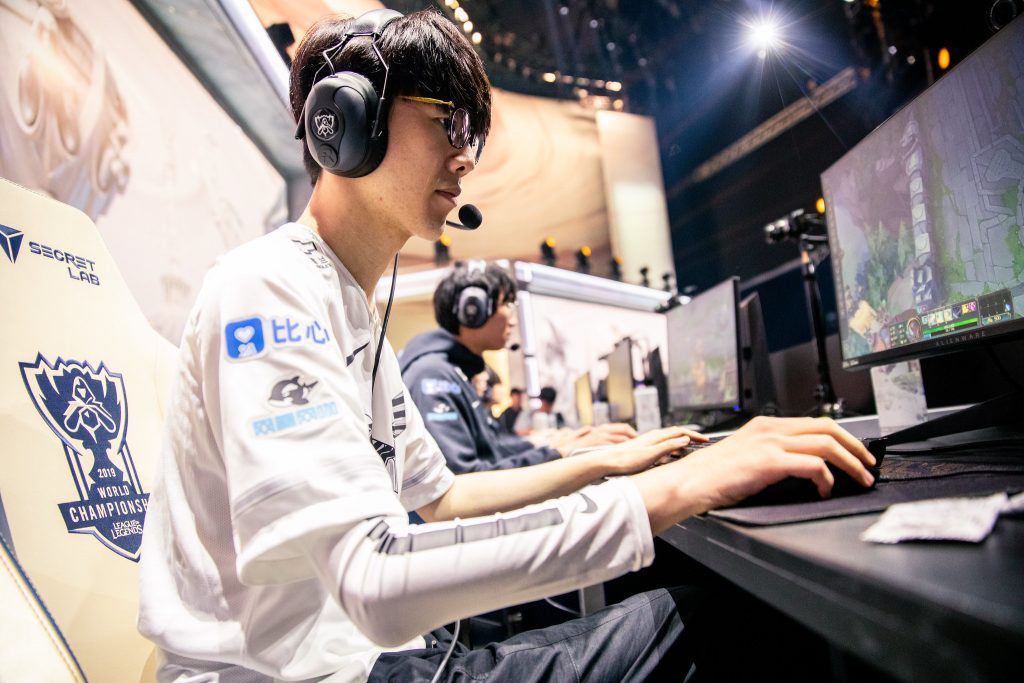 TheShy may be going through an uncharacteristic slump, but Invictus Gaming is still racking up the kills. (Photo via Colin Young-Wolff | Riot Games)

The LoL Pro League (LPL) continues on with week two of the 2020 Summer Split. Invictus Gaming became the first team to 10,000 kills in the LPL, despite a lackluster start from Kang “TheShy” Seung-lok. Meanwhile, Top Esports got some measure of revenge on JD Gaming after coming up short in the Spring Split Finals by sweeping JDG 2-0. We take a look at where things stand in the LPL by looking at the top storylines so far in China.

The start of the season for Invictus Gaming has been a mixed bag. They got crushed 0-2 by Team WE in their opening match before taking a 2-0 win over Suning to close week two. The two results highlight the kind of inconsistency that has plagued iG since their surprise upset to Team Liquid at the 2019 Mid-Season Invitational.

A ladder for the most kills in #LPL history shows you that @invgaming are well and truly the bloodiest organisation in the LPL pic.twitter.com/dqRsVlvHEU

However, they have been very consistent in one area in their time in the LPL: getting kills. In game two of their win over Suning, Invictus Gaming became the first LPL team in history to pick up 10,000 kills. Not only that, but they are more than 800 kills ahead of the next closest team on the list, EDward Gaming. To put that number in perspective: the highest kill count for any team in the league in 2020 Spring was eStar’s 642. Even if Invictus Gaming didn’t pick up another kill for the entire rest of the season, it would still take EDward Gaming at least one more split to get to iG’s mark.

A big part of that slaying prowess comes from top laner TheShy. The star led the LPL in kills in 2020 Spring with 129, not to mention being tops in damage per minute (674) and damage percentage (28.6%). However, his play style does come with a price. TheShy’s 28.1% team death percentage was also the highest in the LPL last season.

In his brief start to the Summer Split, TheShy has been doing a lot more dying than killing. His slump started at the Mid-Season Cup, where TheShy and iG had a tough early exit. TheShy played strong laners in Lucian and Aatrox, yet finished a combined 2/18/6 in his three games. All players, including TheShy, have off days or series, but there could be a worrying trend to start the season.

In his first match of Summer against Team WE, TheShy was a walking bag of gold again. He slashed 1/11/4 on his two Aatrox games in the ugly sweep. It was especially surprising to see him follow up such a poor performance at the Mid-Season Cup with another bad series.

TheShy looked a little bit more like himself in going 3/1/2 on Jayce in the opening game against Suning, but he then followed it up with a 3/6/6 Renekton in their game two win. Yes, TheShy is getting camped, but that’s something he’s dealt with throughout his career.

In fact, when he was being compared to Jang “Nuguri” Ha-gwon at the 2019 World Championship — a player notorious for dying to ganks — TheShy hated it. Of Nuguri, TheShy told Ashley Kang: “I’m gonna be honest. Nuguri has a style that I really dislike. He gets ganked too often, and he doesn’t seem to think about the risks around being ganked […] I actually think that Nuguri is a completely opposite player to me.”

No matter how he wants to be perceived, the comparisons to Nuguri will only continue if TheShy keeps up this play style. Invictus Gaming will hope he can turn it around when they take on Rogue Warriors and EDward Gaming in week three.

When JD Gaming met Top Esports in the LPL Spring Split Finals, it was a battle of the unstoppable force versus the immovable object. JD Gaming had won 15 consecutive games since the return of top laner Zhang “Zoom” Xing-Ran from coronavirus quarantine, while Top Esports had not lost a match since signing ADC Yu “JackeyLove” Wen-Bo. JD Gaming proved to be the stronger force, winning a hotly contested 3-2 series to pick up their first domestic title.

The script was flipped at the inaugural Mid-Season Cup. Both teams went 2-1 in the Group Stage, but JD Gaming were stopped by FunPlus Phoenix in the semifinals. Top Esports swept Gen.G 3-0 in the semifinals before beating FPX 3-1 in the finals to pick up a title of their own. Now, with a title apiece, the teams were set to play for the title of best team in the world in week two of the LPL Summer Split.

Taking down JDG with a 2:0💪
MVPs went to 369 and JackeyLove
GGWP @JDGaming
Gotta keep it going🍑🍑🍑#TESfighting pic.twitter.com/YXHtyJYqlp

Top Esports have surely claimed that after a dominant 2-0 win over JDG. TES were the better team in every area of the series, including top lane. Bai “369” Jia-Hao’s Kayle smacked around Zoom’s Ornn in game one, going 6/0/8 in the 24-minute win. Hung “Karsa” Hao-Hsuan’s Trundle also made Spring Split MVP Seo “Kanavi” Jin-hyeok’s Kayn invisible. Zoom and Kanavi combined to go 1/11/3 in game one.

With Yuumi on his back, game two was the JackeyLove show. As if we needed a reminder of just how important his addition to TES is, he went 10/1/6 on Ezreal and dealt an absurd 30.9k damage to JDG in the win. This was also coming off an illness that forced him to sit out TES’ 2-0 win over Rogue Warriors.

There are sure to be more ups and downs as the season goes on, but Top Esports continue to look like the best team in the world.

LNG Esports didn’t have a lot of expectations heading into the Summer Split. They were coming off a 5-11 record in the Spring, good for 16th in the league. They made no roster upgrades during the break, only bringing aboard new head coach Chou “Steak” Lu-Hsi. Star top laner Li “Flandre” Xuan-Jun was the subject of numerous trade rumors, particularly to Royal Never Give Up, but he stayed put on the roster for the start of Summer.

LNG kicked off their season with an 0-2 loss to Suning in week one. However, it was notable that Zhou “chenlun17” Peng-Yuan replaced Flandre in top lane. In a tale of two extremes, chenlun17 went 5/0/0 on Jayce in the game one loss before going 0/5/1 on Renekton in game two. But LNG saw enough of what they needed to keep him locked in as the starter for week two.

LNG get the clean ace over FPX at the dragon and are running away with this game!#LPL #AllWeFightFor|https://t.co/9PDLL53io2 pic.twitter.com/pOUzQyCNgE

Chenlun17 and LNG rewarded that faith with a pair of upset wins over FunPlus Phoenix and Royal Never Give Up. Chenlun17 held his own against Kim “Khan” Dong-ha, especially in game three of their 2-1 win over FPX. The rookie top laner was named game MVP after his 9/2/8 Sylas helped LNG secure a 31-minute victory. Chenlun17 earned a 24.3% team damage share and was up almost 4k gold on Khan’s Wukong at the end of the game.

LNG continued that momentum with a 2-0 sweep of RNG. LNG had to stall out a 5k RNG gold lead during the mid game to take it late. ADC Wang “Light” Guang-Yu took over from there, going 8/0/7 on Ezreal to carry LNG to a 50-minute victory. Chenlun17’s Jayce chipped in with a 5/2/4 score. LNG then quickly dispatched of RNG in game two, needing only 27 minutes to win 12 kills to 2. Light finished 6/0/5 on Aphelios, but mid laner Huang “Maple” Yi-Tang earned game MVP for his 3/0/8 Azir.

It’s much too early to declare LNG Esports a contender in the LPL, but there are most definitely more threatening than expected this season. LNG gets a matchup with the young guns eStar in week two.

Two Spring playoff teams meet up toward the end of week three. Team WE are looking like they are playoff-caliber this split, especially after dominating Invictus Gaming 2-0. FunPlus Phoenix rebounded from their surprising loss to beat sweep Bilibili Gaming, but they will want to prove they can become a consistent team with Khan starting. Both Kim “Doinb” Tae-sang and Jiang “Teacherma” Chen are roam heavy mid laners, so there should be plenty of action in this one. Team WE will attempt to play around ADC Zhao “Jiumeng” Jia-Hao.

We’re only through two weeks, but LGD Gaming and Top Esports are the last two undefeated teams in the LPL. LGD Gaming made big moves between Spring and Summer, bringing in top laner Xie “Langx” Zhen-Ying, mid laner Su “xiye” Han-Wei, and support Ling “Mark” Xu. Will it be enough to knock off the Mid-Season Cup champs? Top Esports are looking like the best team in the world, but they could be ripe for a letdown series after winning their rematch with JD Gaming.