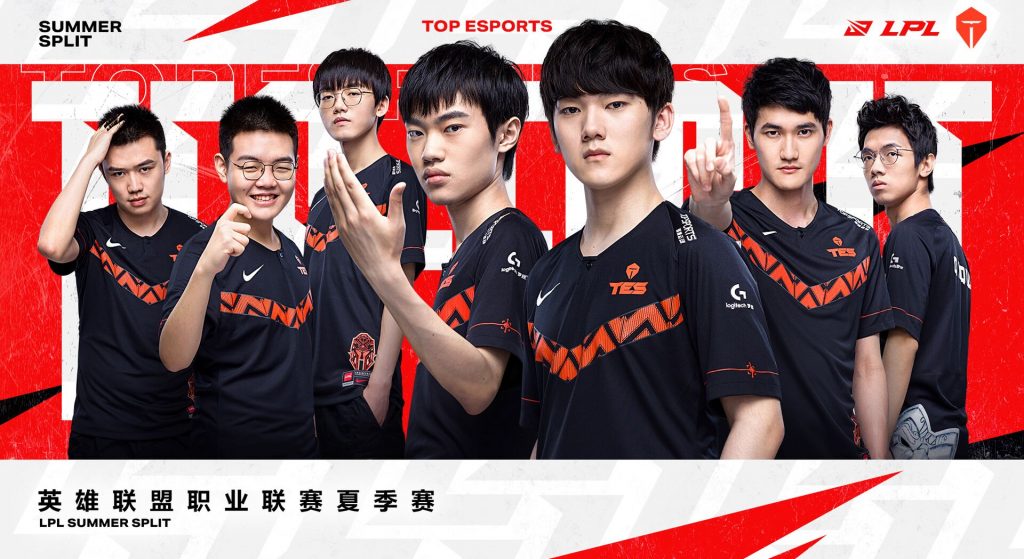 The LoL Pro League (LPL) continues on with week six of the 2020 Summer Split. Top Esports continue to be the class of the league after taking down FunPlus Phoenix in a sweep. Meanwhile, Vici Gaming’s four-game win streak has them looking like a playoff contender. We take a look at where things stand in the LPL by looking at the top storylines so far in China.

After falling to JD Gaming in the Spring Finals, TES have been on absolute fire. They started with a dominant win in the Mid-Season Cup before going on a 7-0 tear to start the LPL. In those seven matches, TES have dropped only two games. Their current form is eerily similar to 2019 FunPlus Phoenix, who turned a dominant Summer campaign into a world championship. With wins already over JD Gaming and LGD Gaming, it’s fair to wonder how many more teams can seriously challenge TES the rest of the season.

FunPlus Phoenix figured to be a good challenge coming into week six. Though they entered at only 5-3, they still have to be considered one of the best teams in China. FPX played well at the Mid-Season Cup, and despite some early hiccups, have done a much better job at integrating Kim “Khan” Dong-ha into their starting lineup. Perhaps they could at least take a game off TES?

TES 2:0 FPX
A clean victory against FPX and currently 8-0 in the standings

Nope. Top Esports were dominant from start to finish in their series. Zhuo “knight” Ding stacked up his Mejai’s Soulstealer on Syndra in both games, Bai “369” Jia-Hao got the best of Khan in both top lane matchups, Hung “Karsa” Hao-Hsuan controlled the early games against Gao “Tian” Tian-Liang, and Yu “JackeyLove” Wen-Bo continued to be the best bot laner in China. TES took game one 20 kills to 9, then won game two 22 kills to 10.

With that series win, TES move to 8-0 on the season with eight matches remaining. Though it sounds impossible in such a tough league, there is a world in which TES can make it through undefeated. They’ll face a tough test against Victory Five to open week seven, but the schedule slows down significantly after that. Both Invictus Gaming and Royal Never Give Up look as weak as they have all year, turning once tough matchups into ones heavily favored for TES. Team WE stand out as a tough match to end the season, but there’s no doubt TES would be gunning hard if they had a chance to close out a perfect regular season.

On the flip side, FPX are now 5-4 and still have some tough games remaining on their schedule. Though they face Rogue Warriors to open week seven, they have to play the suddenly resurgent JD Gaming to end the week. FPX also still have matches against EDward Gaming, LGD Gaming, and Suning.

Vici Gaming made a significant step forward in the Spring Season. After winning only two matches in each of the past four LPL seasons, VG went 7-9 to narrowly miss a playoff berth. Much of that turnaround can be attributed to new head coach and former T1 leader Kim “kkOma” Jeong-gyun’s arrival. kkOma changed the team culture and started to get results from the team’s young core of players.

Vici Gaming then added Lu “Leyan” Jue from Invictus Gaming during the break, giving VG another option in the jungle. It caused expectations to go even higher in Summer, but VG started slow. After sweeping Bilibili Gaming to open Summer, VG dropped seven straight games and three matches. But after wins over Rogue Warriors and FunPlus Phoenix in week six, Vici Gaming have now ripped off four straight match wins and are 5-3 on the season.

Despite Leyan earning the majority of play time so far this season, VG has started to turn back to Li “Aix” Yang during their win streak. Aix was brought in after Leyan and VG lost game one to both Rogue Warriors and FunPlus Phoenix. After those losses, VG were able to come back and win convincingly. That included recovering from a 17 kill to 3 game one loss to FPX and turning it into a 22 kill to 8 game two win. Aix went 11/2/10 on Nidalee before changing it up with a 0/1/6 Trundle game in the finale.

The other big roster change for VG has been moving back to Kim “Zeka” Geon-woo over Deng “Forge” Jie in mid lane. Forge had a great Spring Season, one in which he earned the starting role over Zeka. But after Forge struggled to open the Summer, Zeka has stepped in to solidify the mid lane. Not only has he shown the versatility to play different play style champions like Leblanc, Sett, Zoe, and Azir, Zeka is only 17 years old. He and top laner Dai “Cube” Yi are as young as you can get to play in the LPL, yet both are already making a name for themselves. It’s scary to think of what they and Vici Gaming will be able to do with a long-term commitment from kkOma to coach them up.

Vici Gaming’s streak will get put to the test with a brutal week seven schedule. VG open against the reigning LPL champions in JD Gaming before ending the week against the undefeated Top Esports.

Rogue Warriors had a fine 2020 Spring Split. The final standings may say they finished 13th, but their 7-9 record put them in a virtual tie for ninth and had them only one series away from making the playoffs. Nobody would mistake them for a contender, but they were a respectable team in a stacked league.

The Summer Split has been a different story. Despite losing nobody during the break and only adding EDG Youth jungler Zeng “Youdang” Xian-Xin to the fold, Rogue Warriors started the season 0-8. They tried mixing and matching all different iterations of their lineup: Kim “Crazy” Jae-hee and Bae “Holder” Jae-cheol in top lane, Chen “Haro” Wen-Lin and Youdang in jungle, and Lee “Ruby” Sol-min and Wang “Wuming” Xin in mid lane. None of them worked through five weeks.

Going up against Dominus Esports in what would probably be their best chance to win a series this season, RW went with a new lineup combination: Holder, Haro, and Wuming. That turned out to be the right call, as Rogue Warriors took down DMO to pick up their first win of the season. There will be no team to match the futility of Victory Five’s 2020 Spring Season.

Rogue Warriors opened with a long, 26 kill to 20 game one win. Haro’s Graves was the star, going 11/3/12. A game two loss may have created some doubt, but Rogue Warriors kept their same starting lineup intact for game three. RW then bounced back for a dominant 22 kill to 8 victory to go home happy. Haro was again the hero, going 13/3/5 on Nidalee.

In the grand scheme of things, a Rogue Warriors versus Dominus Esports match means nothing in the LPL standings. Neither team has a shot at playoffs. But it can never be taken for granted how important those matches still are to those players, especially those just starting their pro career. This match will be huge for Rogue Warriors’ confidence, even if their season doesn’t change from this point.

Rogue Warriors will have a tough road ahead if they want to keep up their momentum in week seven. They open against LDG Gaming before closing the week against FunPlus Phoenix. 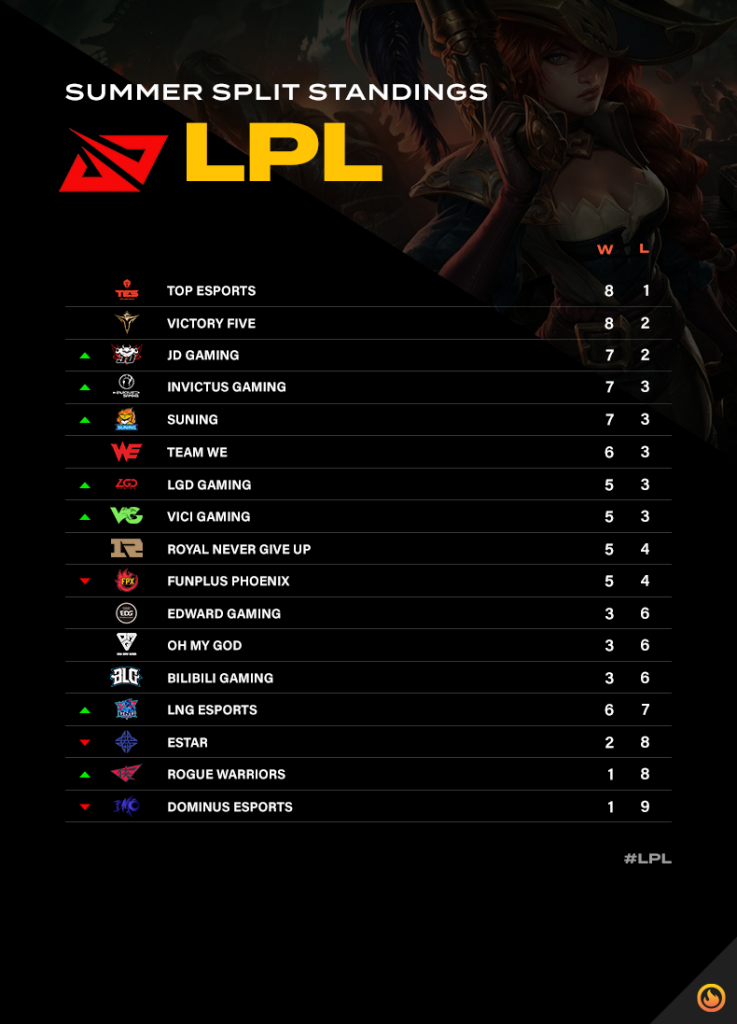 Top Esports unsurprisingly continue to hold the top spot in the league. JD Gaming has charged all the way up to second place after starting the season 1-2. Victory Five and Invictus Gaming round out the top four.

There are no winless teams left in the LPL as now both Dominus Esports and Rogue Warriors have picked up a win. EDward Gaming has continued to slide in the standings and now sit at 3-6. eStar have not been able to replicate their Spring success and are just 2-8 in Summer.

Vici Gaming are coming on strong with a four-game win streak, but no team in the world is hotter than Top Esports. VG have exciting young solo laners in Cube and Zeka, but they’ll have a tough time against the already great 369 and knight. It will be interesting to see if kkOma continues to start Leyan, or if Aix has earned the game one start after closing out both week six victories.

JD Gaming have surged back up the standings after a poor start, passing FunPlus Phoenix in the process. Whether by fatigue or a changing meta, FPX have struggled to replicate their 2019 form throughout 2020. Khan was brought onto the team in part to deal with players like Zhang “Zoom” Xing-Ran, so that will be the lane to keep an eye on in this one. Khan did that very will at the Mid-Season Cup, but JDG have looked a lot better in the past few weeks.