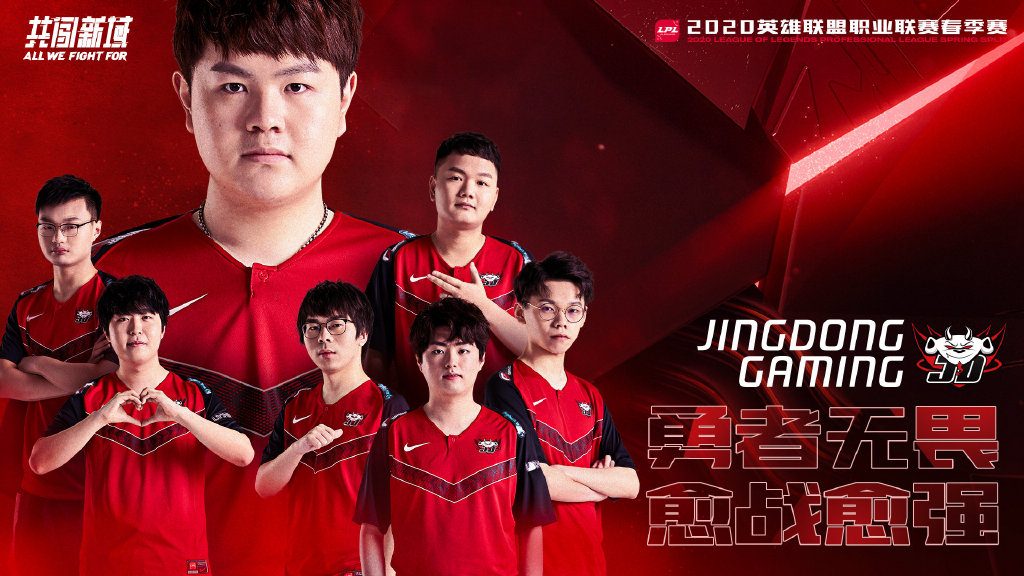 We’ve wrapped up week six of the LoL Pro League (LPL) 2020 Spring Split. JD Gaming clinched a playoff spot after impressive wins over eStar and Invictus Gaming. Meanwhile, Royal Never Give Up suffered a pair of bad losses. We take a look at where things stand in the LPL by looking at the top story lines so far in China.

JD Gaming weren’t really on the radar as one of the top teams in the LPL heading into the season. Their most noteworthy off-season move was the retirement of their former ADC Gu “imp” Seung-bin. Their choice of replacement, Lee “LokeN” Dong-wook, was coming off one of the worst years of his career on Top Esports. Talented substitutes Park “Morgan” Gi-tae and Sung “Flawless” Yeon-jun also left for new teams in the off-season.

JDG got off to a solid start before the hiatus, going 2-0 in week one. Unfortunately for them, their star top laner Zhang “Zoom” Xing-Ran was one of the LPL players unable to make it back to the team headquarters as play resumed. JD Gaming instead had to use He “705” Yu-Long in his place, making Morgan’s absence felt even more. JDG went 4-4 during the weeks that Zoom was unable to play.

But since his return, JD Gaming have been one of the LPL’s best teams. They not only have won four consecutive matches, but all of them have been 2-0 sweeps. That includes huge wins over the top two teams in the league in eStar (11-4) and Invictus Gaming (11-2) in week six.

Seo “Kanavi” Jin-hyeok showed why JDG committed to him as their full-time jungler this season against eStar. They put their trust in his Kindred in game one, and Kanavi delivered. He went 8/4/7, while holding Yan “Wei” Yang-Wei’s Trundle to 1/3/5. Kanavi then went toward a more standard Sylas pick against a team with Ornn and Rumble. He once again controlled the game and finished 8/3/8 in JDG’s 36 minute win.

A 2-0 and Zoom back in the top lane means JDG stay firmly in 5th! #LPL pic.twitter.com/WPamZToSWJ

JDG then had an even easier time against Invictus Gaming. The team gave Kang “TheShy” Seung-lok Sett twice, forcing Zoom to play a tough Ornn matchup. Zoom handled the matchup just fine, holding TheShy to a ridiculous 0/10/4 K/D/A in the two games. It was promising that not only has Zoom shown a willingness to play Ornn for the team, he is thriving on a tank-first champion.

With Zoom back and Kanavi performing as one of the elite junglers in the LPL, JDG are once again one of the top teams in the LPL. They were a team that ran both hot and cold in 2019, but they’ve only run hot so far with Zoom in the lineup in 2020. Assuming they can take care of business in the final week of the season against Dominus Esports and LGD Gaming, JDG have a good chance of earning at least one bye, if not two. They are definitely a team that nobody wants to face heading into the playoffs.

RNG FADING DOWN THE STRETCH

On the opposite end of the spectrum, Royal Never Give Up are a team that is fading down the stretch. They have now lost three consecutive matches, including brutal losses to LGD Gaming and Rogue Warriors in week six.

Their first game of the week against LGD was not competitive. Han “Peanut” Wang-ho popped off on Lee Sin to give LGD an early lead, allowing Hu “Yuuki” Hao-Ming to take over in the mid game. After starting the game with 10 assists, Yuuki’s Azir picked up all five kills in a Cloud Soul fight for a pentakill, giving LGD a 12k gold lead that they would easily close.

RNG looked like they had a better chance in game two. They repelled multiple backdoor attempts from LGD throughout the game, but they lost a 4v3 fight around Baron when they needed it the most. Xie “Langx” Zhen-Ying was a non-factor on Vladimir and has continued to look out of sync with the rest of his team.

A followup loss to Rogue Warriors has RNG teetering on the edge of playoff qualification. After blasting RW in a 21 kill to 3 win in game one, RNG dropped consecutive games to fall to 7-6 on the season. Hung “Karsa” Hao-Hsuan’s replacement Li “XLB” Xiao-Long had a particularly rough pair of games, going a combined 0/15/10 in the losses.

Even with the rough outings from their solo laners and jungler, it’s still hard to properly evaluate the team without Jian “Uzi” Zi-Hao. RNG are still without their star ADC, and though Lu “Betty” Yu-Hung has filled in well, there is no substitute that can match his skill. RNG, for better or worse, revolve their entire team strategy around Uzi. That strategy is not without weakness when Uzi is playing, but it’s only magnified in his absence. RNG may not have been heading toward greatness this split with Uzi, but they definitely have no chance without his return.

Expectations were not high for Victory Five to begin the season. They did not have any noteworthy off-season additions, but they didn’t lose any players to better teams either. Li “Mole” Hao-Yan switched from mid to top, while Pan “xiaohan” Han and Chen “clx” Yi joined from JD Gaming. Wang “y4” Nong-Mo and Li “Max” Xiao-Qiang kept the bot lane from 2019 Summer intact.

Victory Five did have to do some roster shuffling after the coronavirus. Max and xiaohan were unable to return, forcing Li “As6” Xiang and Chen “clx” Yi to step into the starting lineup. Clx role swapped from mid to support until Max’s return. They both rejoined the team against Oh My God in week four, allowing clx to move back to mid lane.

But whether it was starters, substitutes, or role-swappers, it hasn’t mattered who has been in Victory Five’s lineup this season. They are currently having one of the worst seasons in the league’s history, heading into the final week of the season yet to win a match. Not only have they lost every series, they have won only one single game over the course of the season. That was game two against LNG Esports, all the way back in week three of the season. That game featured a bot lane of clx on carry Leblanc and y4 on support Bard.

Victory Five were once again crushed in week six, getting swept by both Suning and Dominus Esports. They were out killed 90 to 37 and lost in an average of 29 minutes in the four games.

The final week of the #LPL regular split is here!

While the split is mercifully coming to a close for V5, they still have opportunities against Bilibili Gaming and Vici Gaming to avoid a winless season.

Two playoff teams face off in a game that likely will have seeding implications for the tournament. The mid lane matchup between Lee “Scout” Ye-chan and Song “Rookie” Eui-jin is reason enough to watch this series. EDG are also getting back to full strength as both Zhao “Jiejie” Li-Jie and Lim “Jinoo” Jin-woo have been re-integrated into the starting lineup. That will be especially important to watch as EDG tries to contain TheShy.

Another pair of playoff teams meet in the final match of the regular season. It will be interesting to see which top laner gets the final regular season games for FPX. Kim “GimGoon” Han-saem jumped back into the starting lineup against EDG after FPX lost to Vici Gaming 2-0 with Kim “Khan” Dong-ha. Meanwhile, Yu “JackeyLove” Wen-Bo finally made his debut with Top Esports against V5 and helped TES stop a two game losing streak. He’ll get a fun matchup against Lin “Lwx” Wei-Xiang and Liu “Crisp” Qing-Song.