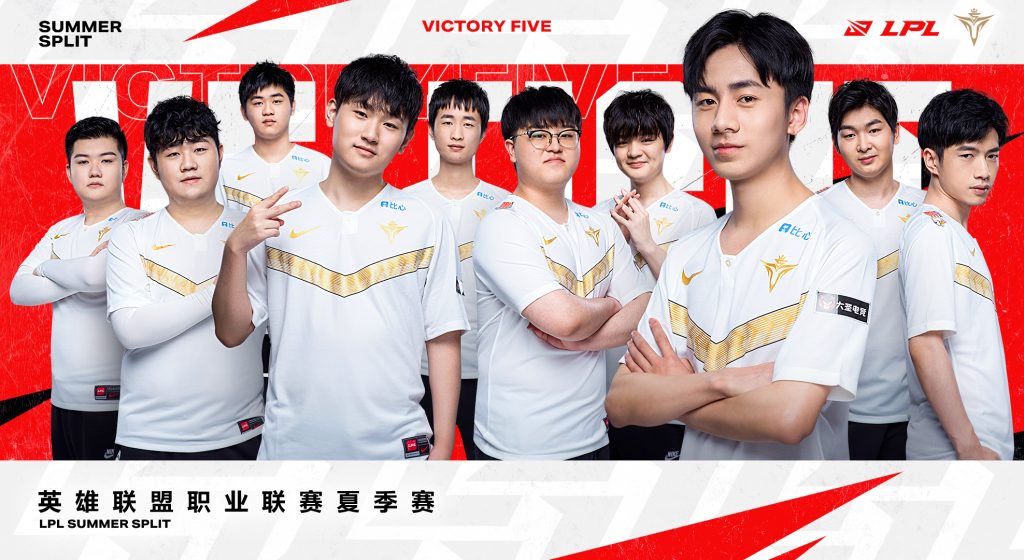 The LoL Pro League (LPL) continues on with week four of the 2020 Summer Split. Spring Split punchline Victory Five have continued an incredible turnaround with another 2-0 week, taking them to 5-1. They are joined by another surprise in LGD Gaming as the only one-loss teams left in the LPL. We take a look at where things stand in the LPL by looking at the top storylines so far in China.

VICTORY FIVE AND ONE

It was a magical moment when Victory Five picked up their first win of Summer in week one. Losers of all 16 matches they played in Spring, any win was cause for celebration. It didn’t matter that it was against Dominus Esports, who currently sit in last place at 0-6. Not only did it immediately top their Spring match record, their two game wins also immediately topped their Spring game record of 1-32. It was hardly an announcement of a playoff contender, but how could they ever be in that conversation after the worst split in LPL history?

When does the V5 going to Worlds meme stop being a meme? 😳#LPL #AllWeFightFor https://t.co/9PDLL53io2 pic.twitter.com/oXXWKS1rKd

It may be time to start that discussion now. After going 2-1 in weeks two and three, Victory Five picked up two more wins in week four to move to 5-1 on the season. That’s good for second place in the 17 team LPL, behind only Top Esports. That puts them ahead of powerhouses like Invictus Gaming, Royal Never Give Up, FunPlus Phoenix, and JD Gaming. It might be time to start taking V5 seriously.

V5 opened week four with a 2-0 win over Vici Gaming. Game one was a stomp led by the bot lane Lee “Samd” Jae-hoon and Guo “ppgod” Peng. The duo combined to go 8/2/27 on the poke pair Ezreal and Bard. V5 then took another easy 18 kills to seven victory in game two. Former Suning jungler Wei “Weiwei” Bo-Han was the standout this time, going 8/0/8 on Nidalee.

After dispatching VG, V5 had a more difficult matchup on paper against the 4-1 Royal Never Give Up. However, the results didn’t paint a picture of a tough opponent. Mid laner Li “Mole” Hao-Yan, the only starting holdover from Spring, opened the series with a 4/0/6 pop-off on Zoe. V5 then only needed 26 minutes to shut down RNG in game two. Both Weiwei (0/0/6) and Samd (4/0/2) went deathless and had perfect kill participation in V5’s six kills to five win.

If V5 are not only beating RNG, but crushing them, it has to be time to consider them to be one of the top threats in the LPL. That’s the same RNG team who are always in the mix and just upended the Spring champions JD Gaming in week three. V5 may have played a softer schedule to date, but their only loss was a respectable 1-2 defeat to the currently 4-1 LGD Gaming.

To think of how far V5 have come in such a short time is incredible. Remember, Spring V5 weren’t just bad — they were the worst team in LPL history. Even if they swapped out four new starters, to go from that level of play to this current run is shocking. Mole is thriving with a more talented team around him, while Weiwei is looking great after an ill-fated run at ADC for Suning. Samd and ppgod have already become one of the best bot lanes in the LPL, which may not be surprising considering TES tried to get their hands on the support from FPX’s academy team.

V5 have a huge test coming up against FunPlus Phoenix to open week five. They’ll then take on eStar to close the week.

Like KT Rolster in the LCK, LGD Gaming are the team you’re never supposed to get your hopes up for in the LPL. The organization is always willing to go after and sign top talent, but you have to go all the way back to 2016 Spring for the last time they made the playoffs. So when LGD went out and picked up Xie “Langx” Zhen-Ying, Su “xiye” Han-Wei, and Ling “Mark” Xu after the Spring Split, LGD still weren’t given the benefit of the doubt heading into Summer.

Like Victory Five, LGD’s record is becoming hard to ignore. Their latest win over Invictus Gaming puts them at 4-1 on the season, good for third place. LGD has had quality wins over V5, eStar, and now Invictus Gaming, while their only loss was to 6-0 Top Esports. Like V5, you couldn’t really ask for more from LGD to open the season.

With the LPL looking wide open behind Top Esports, LGD have positioned themselves well in the playoff hunt. Though they are in third now, they have the tiebreaker over second-place V5 and LGD has already played TES. LGD will take on Suning in their only match in week five.

JD Gaming got off to an unexpectedly slow start in the first three weeks. An opening win against Suning was quickly followed by losses to Top Esports and Royal Never Give Up. While neither of those opponents is weak, especially not TES, you still don’t expect the reigning champions to open the split 1-2. Fortunately for JDG, they had a favorable schedule for a bounce back in week four.

JDG opened against Dominus Esports, the only 0-6 team in the league. JDG took home a 2-0 victory, even if it wasn’t the cleanest series macro-wise. Lee “LokeN” Dong-wook was the star, going 11/0/11 and 4/0/4 on two games of Aphelios. Seo “Kanavi” Jin-hyeok also looked better than he had in previous weeks, going 6/1/13 on carry Lee Sin in game one.

GGWP to @EsportRw ! Took us to Game 3 and showed us what we needed to work on.

Congrats to Kanavi and LvMao for stepping it up to get the MVPs! (yay Bard!)#JDGwin pic.twitter.com/I83Rs8rqKm

JDG then played the only other winless team in the league, the 0-5 Rogue Warriors. JDG opened with a 34 kill to 8 stomp in game one, looking like their old dominant selves. However, JDG then lost game two to give RW their only game win of the season so far. JDG rebounded to win game three 15 kills to 6, but it was still troubling to see them drop a game to such a weak opponent.

It’s clear that JDG aren’t playing up to their Spring form right now. After struggling at the Mid-Season Cup, JDG have not looked the same against LPL competition. Even when playing against the two worst teams in the league, JDG dropped a game and didn’t resemble a championship team. They’ll need to fix their problems quickly, as they face Team WE and Invictus Gaming in week five. 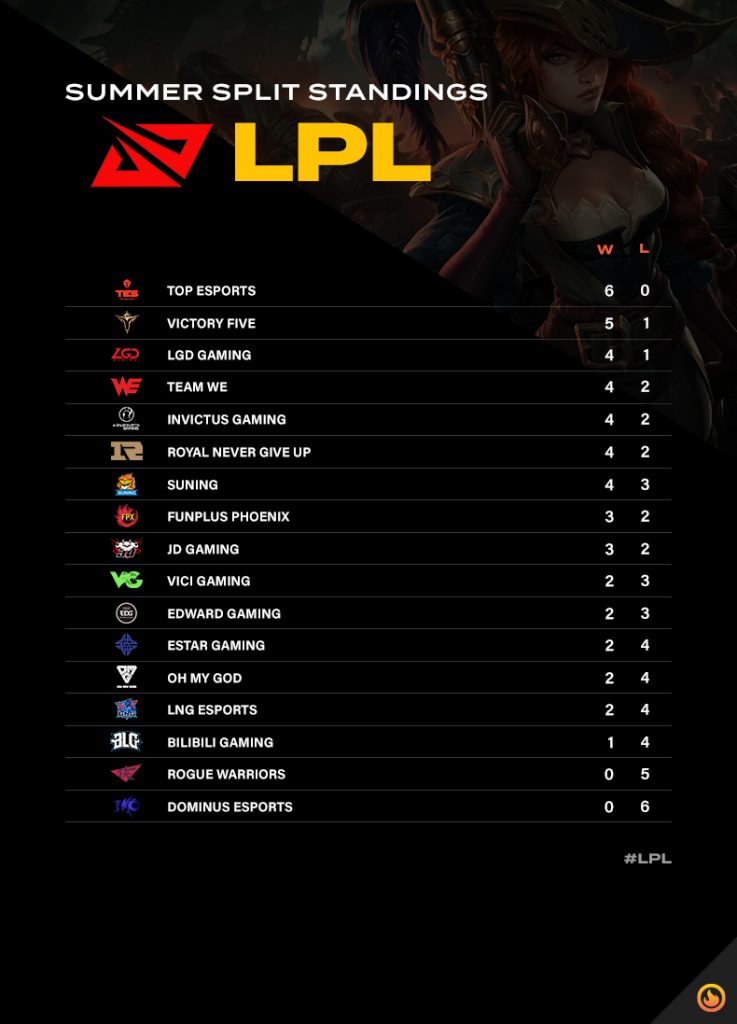 Top Esports continues to pace the league with a 6-0 record after wins over Bilibili Gaming and EDward Gaming. Victory Five and LGD Gaming are the only two teams left to have only lost a single match.

Week four JD Gaming victims Dominus Esports and Rogue Warriors are the only teams left yet to win a match. Invictus Gaming, Royal Never Give Up, FunPlus Phoenix, and JD Gaming are all bunched together in the middle of the standings.

Team WE are currently ahead of all the other two-loss teams, though their start has been a mixed bag. They crushed Invictus Gaming 2-0, but have also lost to Suning. They do catch JD Gaming at a good time, as JDG are still struggling to put together a solid series from start to finish. Jiang “Teacherma” Chen will look to get out of mid and roam as often as possible, so Kanavi will be needed to be on his game to set up for counter ganks. Park “Morgan” Gi-tae will have his hands full with Zhang “Zoom” Xing-Ran.

A battle of two more two-loss teams who really don’t want to drop any more matches this early in the season. RNG finally subbed in former eStar stud Yuan “Cryin” Cheng-Wei against Victory Five, but RNG ended up losing that game. They also have ADC Chen “GALA” Wei available to sub in for Lu “Betty” Yu-Hung if needed. FPX seems committed to Kim “Khan” Dong-ha, especially after his great performance at the Mid-Season Cup, but they might have to swap back to Kim “GimGoon” Han-saem if regular season results don’t follow.