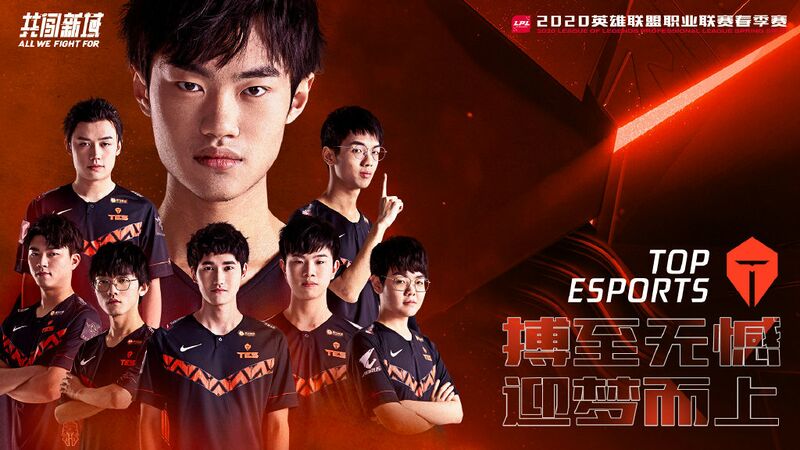 Top Esports picked up a 3-0 week to move up to fourth place in the LPL. (Photo courtesy Leaguepedia)

We’ve wrapped up week four of the LoL Pro League (LPL) 2020 Spring Split. 2019 Regional finalists Top Esports bounced back from a rough 3-3 start with three straight wins. Meanwhile, eStar continue to hold first place in their dominant inaugural split. We take a look at where things stand in the LPL by looking at the top story lines so far in China.

Top Esports were a flawed team in 2019. They had Zhuo “Knight” Ding, the best mid laner in the league and LPL Summer MVP. They also had Bai “369” Jia-Hao, a great secondary carry for the team to play around. But in their other three spots, TES weren’t the best. Xiong “Xx” Yu-Long struggled despite having great solo laners to play around, while Lee “LokeN” Dong-wook and Nam “Ben” Dong-hyun were the worst performing bot lane in the LPL.

Top Esports thus earned a lot of hype in the off-season when they made changes to those three positions. TES called up their strong academy ADC Ying “Photic” Qi-Shen, pairing him with his running mate Liang “yuyanjia” Jia-Yuan. But the big acquisition was former Flash Wolves and Royal Never Give Up jungler Hung “Karsa” Hao-Hsuan. Going from Xx to Karsa at jungle would be one of the biggest single player upgrades in the league.

However, things didn’t go smoothly to begin the season. Top Esports struggled coming back from the hiatus, losing three of four to drop to 3-3. It didn’t look like the break had done them any good. Karsa was still not on the same page as his solo laners, and the bot lane were struggling.

Week four brought TES better results. The more veteran support Zhang “QiuQiu” Ming has replaced yuyanjia in the starting lineup, and TES has been better for it. In their three week four matches, QiuQiu’s ADC Photic has earned the following combined KDAs: 9/1/10 against Dominus Esports, 12/3/16 against JD Gaming, and 8/2/11 against Oh My God. With their bot lane play improving, TES has looked better on the rest of the map.

Not only did TES win all three matches this week, but they won them all 2-0. It can get lost in the picture of match record, but game record is perhaps an even better indicator of performance because of the extra data it provides. In their four previous matches coming off the hiatus, TES were a combined 2-7. So their 6-0 game record in week four stands in even starker contrast to the previous two weeks.

TES will get an opportunity to continue their resurgence against Suning and reigning world champion FunPlus Phoenix in week five.

The debut split of eStar continues to get more and more impressive. After another 3-0 week, they are tops in the LPL in both match record (9-1) and game record (18-6).

They opened the week against the previously undefeated Invictus Gaming. All eStar did was annihilate them 2-0 in one of the most lopsided series of the season. If there was any doubt eStar were already contenders in the LPL, that was erased in one very short series.

Perhaps as impressive, eStar continued that momentum against their lesser opponents in week four. It wasn’t particularly surprising that they had a let down performance in their next game, a loss to LNG Esports. eStar were still up 25 kills to 17 when LNG ended, but those are the kind of situations that you can get yourself into when you let a game drag on for 50 minutes.

Nevertheless, eStar bounced back from that game one defeat to win their next two. Yuan “Cryin” Cheng-Wei’s Azir took over in game two, crushing Huang “Maple” Yi-Tang’s Qiyana. Cryin finished a perfect 9/0/8 to Maple’s 0/5/3. It was then Zhang “Wink” Rui’s turn in game three. He and Liu “ShiauC” Chia-Hao crushed LNG’s bot lane, resulting in Wink finishing 6/0/3 on Varus and nearly 100 CS up on Lu “Asura” Qi.

A 2-0 for Estars as they continue their stay at the top of the #LPL standings!

Next up is OMG vs TES!

Their final match of the week against Dominus Esports required no comeback. eStar were locked in from game one. Yang “Xiaobai” Zhong-He continued his strong tank play, this time piloting Ornn to a 3/1/11 score. While his carries get most of the credit, Xiaobai has continued to play the weak side well. His second straight Ornn game opened up space for Cryin (8/3/10) and Wink (11/2/11) to carry game two.

What may be most impressive about eStar is how well the pieces fit together in their first year as a team. Cryin and Wink are the clear carries, while Xiaobai and Yan “Wei” Yang-Wei have taken on roles to unlock them. Wei started the year picking carries like Qiyana and Karthus, but has now played early game gankers in his last 15 matches in a row — including five straight on Jarvan IV. ShiauC rounds out the team as the playmaking support. He has played more stuff like Thresh, Blitzcrank, Bard, and Sett than Braum or Tahm Kench.

With their matches against FunPlus Phoenix and Invictus Gaming already behind them, eStar are set up well to continue their first place run. Vici Gaming and Royal Never Give Up are next up on the schedule.

Like Top Esports, Royal Never Give Up began the year a mediocre 3-3. The loss to FunPlus Phoenix was expected, but losses to Bilibili Gaming and Vici Gaming were out of the ordinary. RNG are still without the services of Jian “Uzi” Zi-Hao, but replacement Lu “Betty” Yu-Hung has been closer to their best player than their worst. So, it was promising to see RNG pick up a pair of quality wins in week four.

RNG opened week four against the 6-4 JD Gaming. RNG made a statement in this series, running away with it relatively easily. Li “Xiaohu” Yuan-Hao had one of his carry performances that reminds you he can still do that effectively, going 7/1/3 on Irelia into Ornn in game one. Betty supplied the damage from the backline, going 5/0/9 on on-hit Varus in the 16 to 3 kill win. Betty followed that up with a 7/1/10 Miss Fortune performance in game two. RNG conceded only three turrets and three dragons to JDG over both games. Yes, JD Gaming are still missing Zhang “Zoom” Xing-Ran due to the coronavirus restrictions, but JDG have still been good with He “705” Yu-Long.

a quadra kill from him wins us the game and the series. GGWP @JDGaming!#RNGWIN pic.twitter.com/rFdtwzFeBY

EDward Gaming put up more of a fight in RNG’s second series of the week. Despite Zhao “Jiejie” Li-Jie still sitting out, EDG hammered RNG in game one. Lee “Scout” Ye-chan’s Azir took over the game, while EDG’s new ADC Wang “Hope” Jie held Betty to a 0/5/2 performance. RNG’s Pantheon/Senna bot lane pairing did not work out as hoped. EDG won game one 17 kills to 3.

RNG recovered, though, to win the next two games. Xie “Langx” Zhen-Ying reminded RNG fans that he can also carry when given carry champions, going 5/0/8 on Gangplank into Mordekaiser. RNG also swapped their Senna from support to ADC and got much better results from Betty (2/0/13). RNG kept Senna at ADC for game three, a 48 minute back-and-forth affair. Alongside Xiaohu’s Kassadin and Langx’s Ornn scaling, Betty’s 11/3/7 Senna pushed EDG to the series win.

RNG won’t get much time to celebrate their wins, however. They open week five against Victory Five before taking on two of the best teams in the league in eStar and Invictus Gaming.

With FPX's win over BLG today, it also marks the 100th game the championship-five have been playing with each other!

This is what Doinb had to say: "I want to thank my teammates, they've been playing so terribly it has allowed me to pick up so many MVPs, I hope this continues." pic.twitter.com/DLMf7SgBm1

Both teams have looked rejuvenated after a rougher start to the season than expected. Karsa against Gao “Tian” Tian-Liang should be a fun matchup of opposing pacing. Tian will pair with Kim “Doinb” Tae-sang to speed the pace up, while Karsa will try to slow it down. But obviously, all eyes will be on the mid lane matchup, featuring the previous two LPL MVPs. Doinb leads in the league with nine game MVPs so far this split, but Knight is right behind him with seven.

Invictus Gaming bounced back from their trouncing by eStar to beat Suning, but this matchup will be their next true test on the season. Even though RNG have been giving more carries to Langx and Xiaohu, this will still be a tilted map where RNG want to play around bot side and iG want to play around top side. It will be up to Ding “Puff” Wang and Su “Southwind” Zhi-Lin to continue to be the rocks for iG as Kang “TheShy” Seung-lok, Gao “Ning” Zhen-Ning, and Song “Rookie” Eui-jin continue to push their play to the limits.