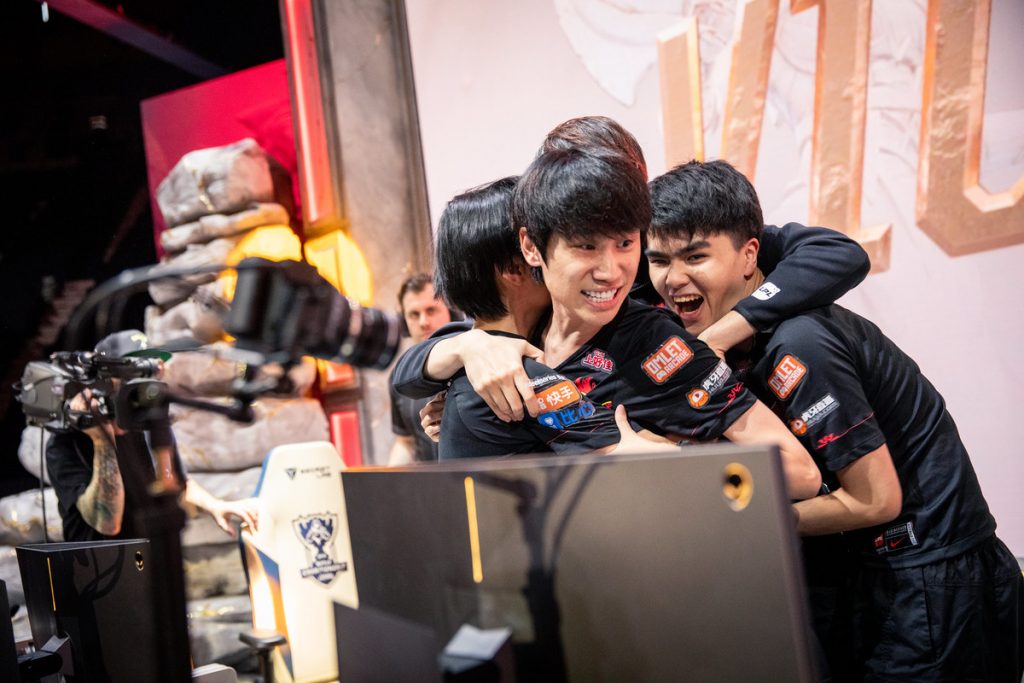 The Phoenix are flying high again after a pair of big wins over V5 and RNG. (Photo courtesy Colin Young-Wolff - Riot Games)

The LoL Pro League (LPL) continues on with week five of the 2020 Summer Split. FunPlus Phoenix picked up a pair of important wins to make a move up the standings, as did JD Gaming. On the flip side, Royal Never Give Up picked up two more losses as they try to figure out their best starting lineup. We take a look at where things stand in the LPL by looking at the top storylines so far in China.

Most teams would be happy with FunPlus Phoenix’s performance so far in 2020. FPX went 12-4 in the Spring Split, good for the third seed. They then won their quarterfinals match against EDward Gaming before falling to eventual champion JD Gaming in the semifinals. FPX would then crush Invictus Gaming 3-0 in the third place match.

As the third LPL seed, FPX qualified for the Mid-Season Cup. After going 2-1 in Group A, including a win over Top Esports, FPX would finish second in the tournament to TES. FunPlus Phoenix then started the Summer Split 3-2, and while not elite, it is still a positive win ratio through five matches.

But as we know, FunPlus Phoenix aren’t most teams. The 2019 World Champions made it known they would do everything in their power to repeat, starting by acquiring Kim “Khan” Dong-ha in the off-season. FPX then lost Khan during the coronavirus pandemic, forcing them to play with Kim “GimGoon” Han-saem for most of the split. Even when Khan returned, there were still some growing pains as he acclimated to the team.

It was a close game but eventually we managed to secure the win! WP @RNGRoyal !

With only five weeks left of regular season play in 2020, it’s time for FPX to turn it up a notch. They did that in week five with a pair of very important wins over second place Victory Five and Royal Never Give Up.

FPX actually lost their opening game against V5, but rebounded in a big way. The team picked up a near perfect game in game two, conceding zero kills and only two turrets. Both Khan’s Sylas and Kim “Doinb” Tae-sang’s Orianna went 4/0/5 with perfect kill participation. FPX then took another 28 minute win in game three, this time relying on Gao “Tian” Tian-Liang’s Graves (4/0/10) and Lin “Lwx” Wei-Xiang’s Ashe (5/0/10).

FPX again lost their opener to Royal Never Give Up, but this time they almost lost game two as well. RNG was in total control, up 3k gold and seven kills, only to throw it away. FunPlus Phoenix caught out Chen “GALA” Wei’s Kai’Sa twice at crucial moments to claw their way back in. FPX would go on to win this game despite ending down 10 kills to 12. After that demoralizing loss for RNG, FPX crushed RNG 19 kills to 4 in only 26 minutes in game three. Liu “Crisp” Qing-Song went 5/0/8 on Nautilus.

They were by no means perfect matches for FunPlus Phoenix, but wins over quality opponents are hard to come by. The resilience they showed in both series is also important, especially when you consider they didn’t drop many games at all late in 2019. With Khan looking better by the game, FPX are once again one of the top threats to dethrone JD Gaming and Top Esports atop the LPL.

Royal Never Give Up have been a lot of things over the year, but one thing they have not been is a roster in flux. Fans may have been frustrated at times with players in their roles, but you generally knew what starting lineup you would see from game to game. That was especially true of Li “Xiaohu” Yuan-Hao in mid lane and Jian “Uzi” Zi-Hao in bot. But now Uzi’s gone, and Xiaohu’s spot is not as secure as it once was.

RNG’s first starting lineup change of the season actually came in week four against Victory Five, but it was only for game two of the series. After dropping game one, RNG subbed in top laner He “705” Yu-Long for Tian “New” Zhi-Peng and Yuan “Cryin” Cheng-Wei for Xiaohu. The new lineup kept the score closer, but ultimately both lineups went home without a win against V5.

RNG went back to New over 705 to open week five against Team WE, but Cryin remained in the starting lineup. Cryin earned game one MVP with a 5/0/1 Syndra performance, but RNG would drop the next two games. Cryin in particular had a rough pair of games, including losing lane to Jiang “Teacherma” Chen, one of the weakest laners in the league. Teacherma famously struggled to get out of Platinum in solo queue early on in the season, calling into question his pro eligibility.

That earned Xiaohu the subsequent start against FunPlus Phoenix, but RNG made their third roster change in this series. Former Dominus Esports ADC Gala earned his first start of the season after joining RNG during week three of the split. GALA looked great in game one, going 9/2/16 on Aphelios and got off to a hot start in game two. But two untimely deaths allowed FPX to climb back into the match and force another game. GALA’s Aphelios (0/3/2) and Shi “Ming” Sen-Ming’s Sett (0/5/0) got picked on in the crushing loss.

RNG have now dropped to 4-4 on the season and have a starting lineup that is changing by the series. Cryin is a better team fighter than Xiaohu, but has struggled in the laning phase. GALA has more carry potential than Lu “Betty” Yu-Hung, but Betty has much better positioning. RNG just can’t figure out how to bring it all together without their old star player to draw the focus of opposing teams. They will try to rebound with a match against EDward Gaming in week six.

JD Gaming won twice in week four, but they weren’t very convincing wins. JDG beat the two worst teams in the league, Dominus Esports and Rogue Warriors, even handing RW their first game win of the season. Though the wins got them back over .500, questions remained about their return to their Spring Split form.

JDG looked more like their old selves in a pair of wins in week five. JDG opened against Team WE, who entered the series at 5-2 on the season. JDG were crushed 17 kills to 3 in game one, but they rebounded. A long, 43 minute game two made way for a 26 minute stomp of their own in game three. The Spring Split MVP Seo “Kanavi” Jin-hyeok also seemed to wake up in this series, earning game MVP in both games two and three.

Congratulations to Kanavi, Lee Sin, and @JDG_LokeN for taking the MVPs this series! Let's continue the steady match to form! #JDGwin pic.twitter.com/e7iUQQP9sd

JDG then had absolutely no problem in dispatching Invictus Gaming in their second series. Zhang “Zoom” Xing-Ran’s Renekton crushed Kang “TheShy” Seung-lok’s Jayce in game one, allowing JDG to cruise to a 29 minute victory. JDG then picked up another 29 minute win in game two off the back of a 9/2/6 Ezreal performance by Lee “LokeN” Dong-wook.

Neither Team WE nor iG are what you would consider the elite teams of the LPL at this point, but both are 5-3 after the loss and expected to be playoff teams. Considering the caliber of team JDG was struggling to put away in week four, these wins are definitely another step forward in getting back on track. JDG has tough games against EDward Gaming and LGD Gaming to look forward to in week six. 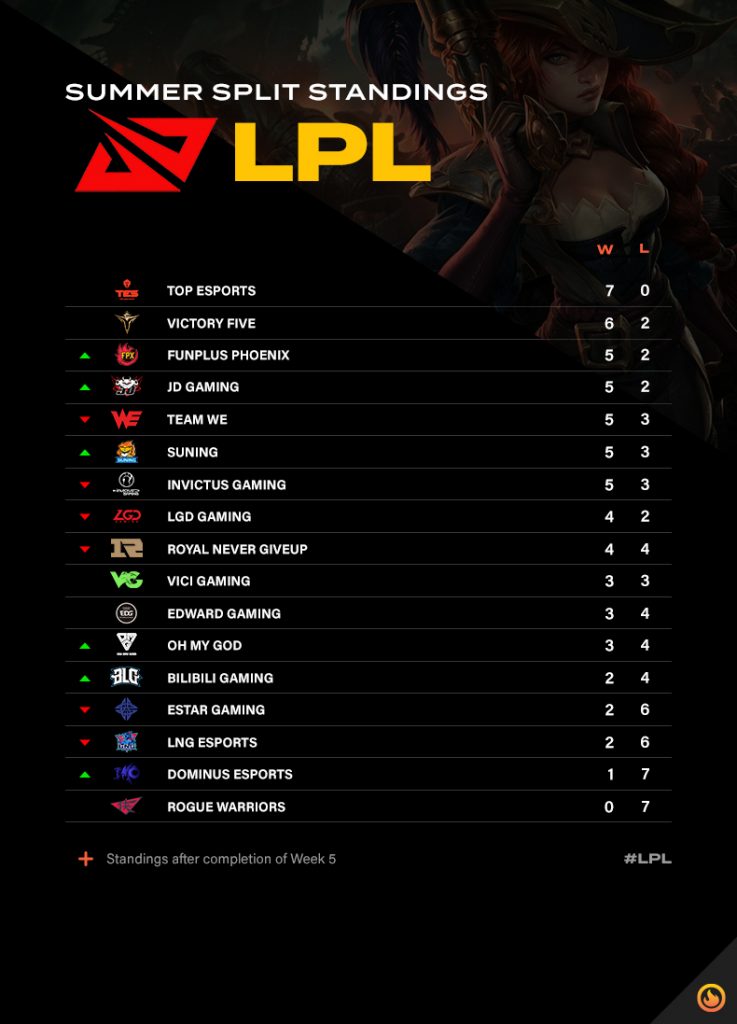 Top Esports remain the lone undefeated team in the league at 7-0. FunPlus Phoenix’s win over Victory Five brought them closer to second place, but V5 are still one match ahead of FPX in the win column. Four straight wins have brought JD Gaming back to the top four.

At the bottom, Rogue Warriors remain the lone winless team in the league at 0-7. eStar have a worse match record (2-6) than their 8-12 game record would indicate, but they are still struggling to regain their early Spring Split form. Royal Never Give Up have fallen out of playoff position after a pair of losses.

Two of the top teams in the LPL will battle in an important match for playoff position. Both teams are heavily jungle focused, so Kanavi versus Han “Peanut” Wang-ho will be an important matchup to watch. Xie “Langx” Zhen-Ying has done much better outside of the RNG spotlight, but he’ll have his hands full with Zoom. Ha “Kramer” Jong-hun and Ling “Mark” Xu could give LokeN and Zuo “LvMao” Ming-Hao more trouble than expected.

This should be one of the best matches of the season. Top Esports look unstoppable right now, and they took down FPX in the finals of the Mid-Season Cup. But FPX obviously have the talent to match TES and have proven themselves in big games. With Khan fitting in better and better with FPX, his matchup with Bai “369” Jia-Hao could be the one that swings the series. It’s always fun to see star mid laners Zhuo “knight” Ding and Doinb face off with their contrasting play styles.