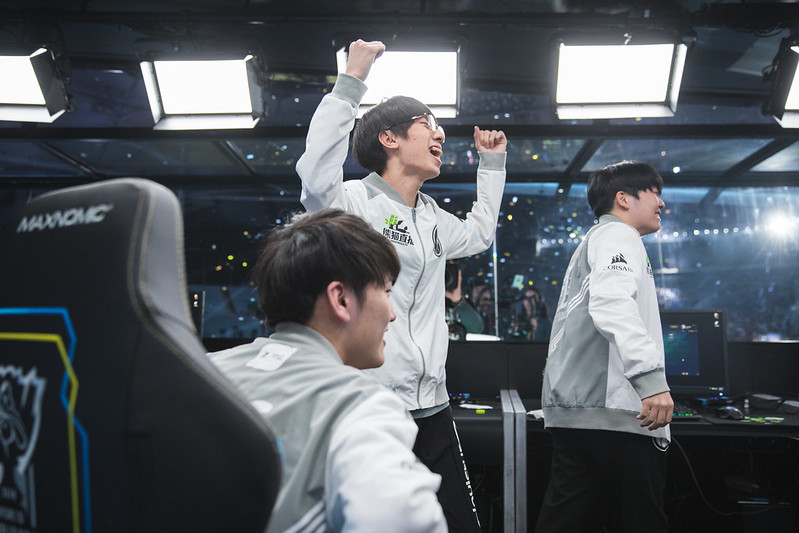 Baolan’s return to the starting lineup has helped Invictus Gaming get back on track. (Photo courtesy Riot Games)

The LoL Pro League (LPL) continues on with week eight of the 2020 Summer Split. Invictus Gaming look like they’re back after a dominant 2-0 victory over Top Esports, while FunPlus Phoenix have made a top lane substitution to try to salvage their season. We take a look at where things stand in the LPL by looking at the top storylines so far in China.

INVICTUS GAMING ARE BACK

Invictus Gaming have been wildly inconsistent since their 2018 World Championship win. They continued to look like the best team in the world in 2019 Spring, winning that LPL title with ease. iG then were upset by Team Liquid in the semifinals of the 2019 Mid-Season Invitational to send them into a deep funk. iG went only 9-6 in the 2019 Summer regular season, then got swept by LNG Esports in the first round of the playoffs. A pair of 3-2 wins in the Regional Finals qualified them for 2019 Worlds, where they eventually lost to FunPlus Phoenix in the semifinals.

After losing Yu “JackeyLove” Wen-Bo in the off-season, iG brought in Ding “Puff” Wang and Su “Southwind” Zhi-Lin to retool their bot lane. iG had a great regular season, going 14-2 to earn the LPL’s top seed by two games over JD Gaming. However, iG looked outclassed in the playoffs. They lost to Top Esports 3-1 in their first playoff match, then got destroyed 3-0 by FunPlus Phoenix in the third place match. Despite the dominant regular season, iG went 1-6 in the playoffs.

iG then shockingly let Lu “Leyan” Jue transfer to Vici Gaming between splits, giving the full time jungling job back to Gao “Ning” Zhen-Ning, who had lost his starting spot repeatedly throughout 2019 and 2020. iG went 0-3 at the Mid-Season Cup, losing to both LCK teams and JD Gaming. Early LPL losses to Team WE, LGD Gaming, and JD Gaming saw iG exceed their Spring loss total only halfway through the season.

But something has finally clicked with iG as they entered the second half of their Summer Split. Despite Southwind being the big selling point on the new iG bot lane, he’s been replaced in the starting lineup by Wang “Baolan” Liu-Yi, who was considered the big weak point on the team before his benching. While Baolan has looked better and fit in well with Puff, the effect on Ning has potentially been an even bigger deal. Ning has looked much more like his late 2018/early 2019 self with Baolan, continuing to aggressively invade the enemy jungle, but no longer conceding deaths in doing so.

What a series to start the week! A great victory against a great opponent!

We will keep it up and prepare for our next matchup with TES Sunday 26th!#invictusgaming pic.twitter.com/Y8oWEjrQA1

iG had their most difficult week of the season in week eight, having to play both 8-2 Victory Five and 10-1 Top Esports. If this was a test of their status in the LPL, Invictus Gaming passed with flying colors. A 2-1 win over Victory Five and 2-0 sweep of Top Esports has them right back in the conversation of the best teams in the LPL, and therefore, the world.

Invictus Gaming got crushed by Victory Five in game one before rebounding to win the next two. Ning’s Graves carried game two with a 6/0/7 Graves, though Kang “TheShy” Seung-lok’s Kennen earned game MVP for his 19.6k damage Kennen. Puff’s Apehlios carried game three, going 13/2/8 in iG’s quick 27 minute win. The two teams combined for 49 kills in a classic LPL slugfest.

iG then completed a sweep of Top Esports. TheShy’s Mordekaiser was clean in game one, earning him an 8/3/7 score. Puff chipped in with a 9/3/9 Ashe, while Song “Rookie” Eui-jin’s Azir dished out the damage. iG then won game two, despite being down 16 kills to 18 when they finished the game. Rookie’s Orianna was a dominant 7/3/9, including a superb sequence top lane to turn it around for iG:

Who says Orianna is an immobile control mage? Not Rookie. pic.twitter.com/FP0c9Eo4S4

TheShy and Rookie have maintained their excellence during iG’s struggles, but the re-emergence of Ning and Baolan has made iG a force to be reckoned with again. Puff doesn’t offer the same upside that JackeyLove did, but his steadiness makes him an even better weak side player as Ning focuses on the top side.

Invictus Gaming only have two matches left in their push to earn one of two double byes in the LPL. They face Oh My God in week nine, followed by Vici Gaming in the final week.

Top Esports looked unbeatable for a long stretch in 2020. TES made a deep playoff run after JackeyLove’s addition late in the Spring, losing only to JD Gaming in the Spring finals. TES atoned for that loss by winning the Mid-Season Cup, then continued their dominance into the Summer Split. They did not lose in the first six weeks of the season, going 8-0 in that span to top the league.

Victory Five put the first chink in their armor to open week seven. Guo “ppgod” Peng and crew attacked TES’ bot lane, proving that JackeyLove and Liang “yuyanjia” Jia-Yuan are not infallible. Yuyanjia went 0/7/3 and 1/3/4 in the losses, while JackeyLove’s struggles didn’t help TES make strong map decisions. TES still took game two with a dominant effort from Zhuo “knight” Ding’s 10/0/3 Cassiopeia, but it was the first sign that they could be beaten.

TES 0:2 IG
Today we lost to the strong opponent, we shall reflect on our mistakes, and come back better and stronger💪
GGWP @invgaming , well deserved. pic.twitter.com/4l6phdaYdq

After recovering with sweeps over Vici Gaming and Dominus Esports, TES’ 2-0 loss to Invictus Gaming to end week eight is more troubling. Invictus Gaming are definitely a great team that can match TES in individual skill, but TES lost in the matchups they were supposed to win. Ning got the better of his matchup with Hung “Karsa” Hao-Hsuan, playing two strong games on Volibear. iG’s new bot lane also outplayed their old teammate, catching him out in ways we haven’t seen since JackeyLove joined TES.

Though Top Esports have dropped out of the top spot in the LPL, there’s no reason to panic. With only two losses on the season, they still control their own destiny in the race for a top two seed. JD Gaming now have the inside track to the first seed, but Top Esports would need to lose for Invictus Gaming to have a shot at taking the other bye.

The unfortunate news for TES is that they have a tough slate of games remaining on the season. TES open week nine against 10-3 Suning, one of the other teams charging for a top two playoff spot. TES then have to play Royal Never Give Up, eStar, and Team WE to close the season.

We wondered when FunPlus Phoenix would make a top lane swap after week seven. Despite Kim “Khan” Dong-ha’s superior laning, the fact remained that FPX have played better with Kim “GimGoon” Han-saem throughout 2020. The numbers don’t lie. FPX entered week eight 23-11 with GimGoon in the starting lineup, compared to 29-26 with Khan. The swap seemed more like a question of when than if.

The wait is now over. FPX officially moved GimGoon back into the starting lineup in week eight, starting him in all five games against Oh My God and EDward Gaming.

GimGoon opened in his familiar role, playing the weak side in game one against Oh My God. His signature Gangplank was up to the task, going 3/5/10 into the counter pick Renekton. FPX used his self-sufficiency to get the rest of the map ahead, leading to good scores from Kim “Doinb” Tae-sang’s Twisted Fate (3/1/11) and Lin “Lwx” Wei-Xiang’s Senna (5/1/7). GimGoon again did his job in game two, going 1/1/8 on a more supportive Renekton in FPX’s 14 kill to 1 win.

GimGoon got absolutely blown out in the laning phase against Huang “Xiaoxiang” Xiang and EDward Gaming, but it didn’t matter. After losing game one, FPX recovered to win the final two games to pick up a 2-0 week. GimGoon held on in lane, doing enough to allow the rest of his team to win the game. This series was the best example of how FPX plays better with GimGoon, even if he is a less skilled player.

FPX seemingly have no choice but to start GimGoon going forward. It’s hard to imagine FPX beating the top LPL teams with GimGoon getting crushed in lane, but it’s the only formula that’s worked for FPX, barring the third place match against Invictus Gaming in the Spring playoffs. FPX will get to see how GimGoon holds up against Xie “Langx” Zhen-Ying and LGD Gaming in week nine. 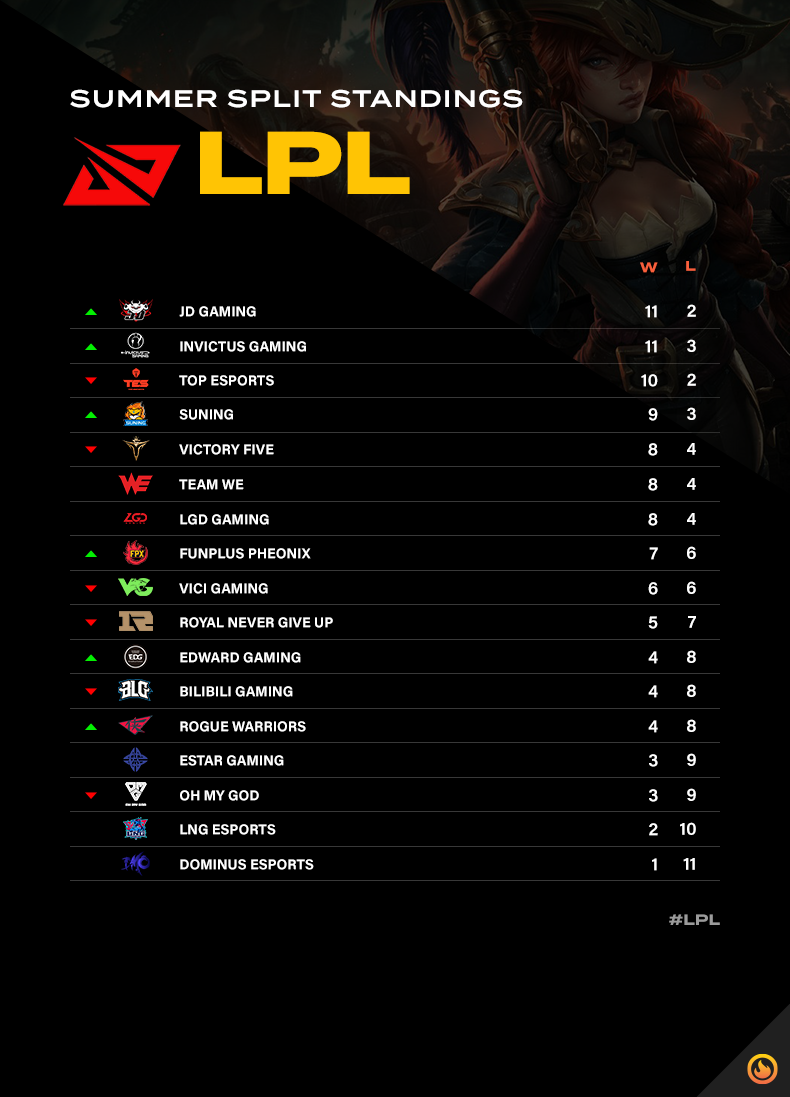 With Top Esports’ loss to Invictus Gaming, JD Gaming now take over the top spot in the LPL. JDG, iG, and TES have all locked up their playoff spots with two weeks to go in the season. Suning currently have a hold on the fourth seed for the final playoff bye, but three teams lurk with only four losses on the season.

Dominus Esports and LNG Esports became the first two teams to be eliminated from playoff contention. Rogue Warriors continued their late season surge, improving to 4-8 after a 2-0 win over eStar. Royal Never Give Up and EDward Gaming are in danger of missing their first playoffs in a long time.

It was only a week ago that Top Esports looked like a lock to earn a double bye in the playoffs. Now, a loss in their final four matches could open the door for Invictus Gaming or Suning to snatch it away. Suning are on an absolute tear, winning their past eight matches after starting the Summer 2-3. If JackeyLove and yuyanjia don’t get back into form, Tang “huanfeng” Huan-Feng and Hu “SwordArt” Shuo-Chieh will make them pay. Could we see TES give Zhang “QiuQiu” Ming another start?

Both teams sit in the top five in the standings, but are heading in opposite directions. JD Gaming are on a 10 match win streak after starting the season 1-2, while Victory Five have now lost two in a row after their upset win over Top Esports. Victory Five like to play through their bot and mid lane, while JD Gaming’s Zhang “Zoom” Xing-Ran remains one of the game’s dominant top laners. Seo “Kanavi” Jin-hyeok has had more hit-or-miss games this Summer than he had in Spring. Can Wei “Weiwei” Bo-Han take advantage of the inconsistency?