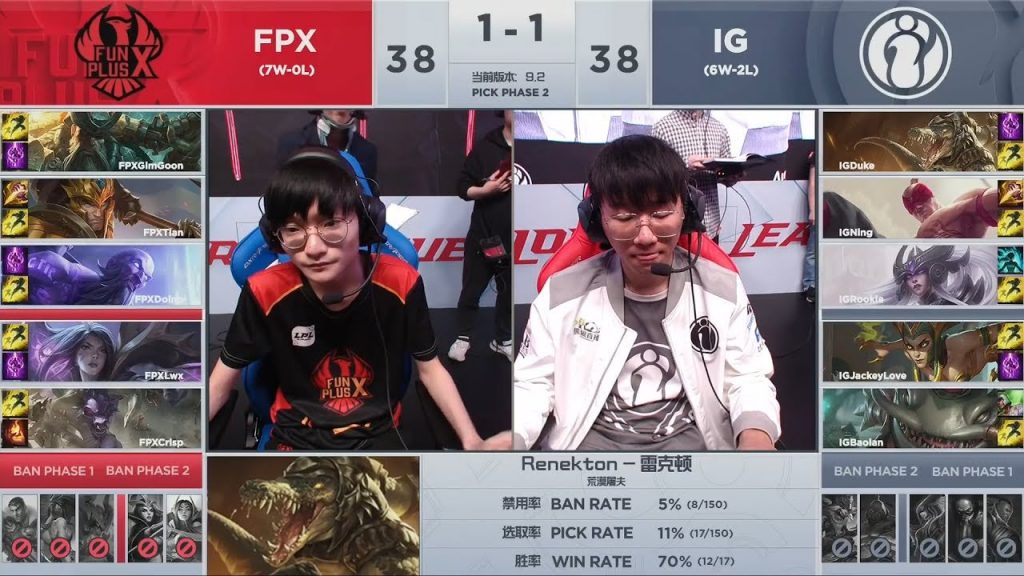 This past week featured an undefeated FunPlus Phoenix taking on a dangerous challenger in IG. (Image courtesy of LCK)

Six weeks are down in the 2019 LPL Spring Split. FunPlus Phoenix continues to top the standings, while LGD Gaming are the only squad still sitting on one win. We take a look back at the match results, top storylines, best plays, and standout individual performances from the past week in China.

This is the match we had all been waiting for in the LPL. The top team FunPlus Phoenix, sat at a 7-0 match record but had yet to play any of the true heavyweights. The defending world champions Invictus Gaming, already with two losses but as dangerous as ever.

IG started the series out with a reminder of just how good they are. Ning brought out his pocket pick Kayn in Game 1 and made an early impact. He and IG picked up two early kills around the drake pit and used that advantage to secure the infernal drake pre-10 minutes.

The first big fight of Game 1 took place around FPX’s blue buff. Ning and Baolan setup early to try to deny it from Doinb’s Lissandra. All five members from both teams ended up collapsing, including both ADCs teleporting in. The fight started in an even 2-for-2 exchange, but Doinb ran out of mana without blue buff and JackeyLove’s Ezreal cleaned up the fight for a triple kill. The fight ran IG’s gold lead up to 3k before 16 minutes.

The teams fought mid at 23 minutes and IG wiped the floor with FPX. Rookie’s Syndra hit some great E Scatter the Weaks on FPX and Lwx had no way to enter the fight. IG took four kills for none, breaking the game wide open in their 26-minute win.

Despite the loss, FPX bounced back in a big way in Game 2. They were in control of this one the entire way, taking skirmishes across the map at the same time and winning them all. TheShy’s Darius pick into Sion was heavily punished by pressure from Tian’s Olaf. TheShy finished this game 1/7/1 while getting the counter pick in top lane. Bot lane didn’t fare much better, as both JackeyLove’s Ezreal and Baolan’s Galio finished 0/5/2. FPX stomped this game, winning 29 kills to 6 in under 22 minutes.

The winner-take-all Game 3 was the most closely contested of the series. Tian got it started for FPX with a solo kill on Ning, but IG bounced back quickly. They executed a 3 man dive on GimGoon’s Gangplank, easily picking up the kill. Meanwhile, JackeyLove picked up a kill bot lane in the 2v2 while Doinb just pushed mid.

With their lane dominant picks and players, IG had the gold lead post 20 minutes. Lane priority gave them CS leads and led to them chipping down 4 turrets to FPX’s 2. But as the game wore on, FPX had scaling on their side.

FPX won a fight in the top river 2-for-0 after they caught out JackeyLove’s Cassiopeia. They transitioned to Baron and were able to secure it and reclaim the gold lead. It was all they needed to stall out the game and allow Gangplank, Ryze, and Kai’Sa to get their items.

The final team fight took place in IG’s blue jungle. IG just didn’t have the lockdown to be able to deal with the three carry threats from FPX when they all had reached three or more items. Tian’s Jarvan IV was the man who made sure they got there, picking up kill participation in 13 of FPX’s 15 kills.

Nobody in Suning will lose any sleep over their 2-0 loss to Invictus Gaming. Neither game was particularly close, but even if you hoped to be more competitive, it’s no surprise to come up short against the defending world champs. They did put up a better fight in Game 2 after subbing out Maple and H4cker for Angel and WeiWei, but that it was still not enough.

However, the series loss to Oh My God has to sting. OMG only had one match win on the season before playing Suning and are a team that shouldn’t be giving a playoff team any trouble. Suning finally stayed with a lineup for three games, choosing Maple over Angel and WeiWei over H4cker, but even that consistency was not enough.

You can see that Suning still has laning power by the way they can get out to early leads. In their final game against OMG, Suning were up 22 kills to 20, 4 drakes to 0, and 10 turrets to 6 when their Nexus fell. Something isn’t clicking for them ever since they had the extended break and illness took out Maple and H4cker.

Now Suning are on the outside looking in on the playoff picture. Their 5-5 record is good for 9th place in a league that takes 8 teams to the playoffs. Suning have also yet to play Bililibili Gaming, JD Gaming, and Topsports Gaming, all teams ahead of Suning in the standings and expected to be favored. Suning need to turn their Spring Split around now if they want any hopes of reaching the playoffs.

Rogue Warriors had just nearly wiped Snake Esports and were going for the win. RW had a 7k gold lead and looked to have evened up the series at 1-1 to force a Game 3.

RW had four members still up to SS’s two as the final Nexus turret fell. They were mostly on low health, but surely they had time to end the game, right?

Instead, Asura’s Ezreal and Mala’s Lissandra spawned just in time to help Flandre and SofM stone RW at the Nexus. ZWuji’s Kalista was one auto attack away from finishing the Nexus and the game but couldn’t get it off.

Snake Esports then were able to use a wave bot lane to push through four turrets, an inhibitor, and the Nexus to take down the game. Both teams are near the bottom of the standings, but it was a crazy ending and could be relevant if Snake Esports can get hot down the stretch run.

Are Bilibili Gaming A Contender?

Bilibili Gaming are 5-2, good for 4th place in the LPL. But are they actually good? The truth is we just don’t know yet.

Consider the list of teams they have yet to play: EDward Gaming, FunPlus Phoenix, Invictus Gaming, Royal Never Give Up, Suning, and Topsports Gaming. That’s the entire playoff field, save for 8th place SinoDragon Gaming (who BG did beat).

We’ll get some answers in the coming weeks: first in Week 7 against Suning and then in Week 8 against RNG. If they can string together some wins down the stretch to make the playoffs, Bilibili Gaming will certainly have earned it with that daunting schedule.

Player of the Week: Tian

Tian was a kill participation monster this week in powering FunPlus Phoenix to wins over Oh My God and Invictus Gaming. In fact, he had 100% kill participation in Game 1 of both of the series. Sure, FPX lost that Game 1 to IG, but it wasn’t because Tian was nowhere to be found.

Over the five games he played this week, Tian finished with a combined 17/15/49 K/D/A. He participated on 66 of FPX’s 81 kills over the week, good for 81.5%. That number over the entire season would be good for 2nd among all players in the LPL and first among junglers. It has brought his season-long average kill participation up to 70.1%, just in the middle of the pack among LPL junglers.

If Tian has found another gear as the season goes along, it means that FPX are that much scarier. He bested Ning in their series against IG and will look to keep putting Doinb and the rest of FPX in a position to crush the rest of the LPL.