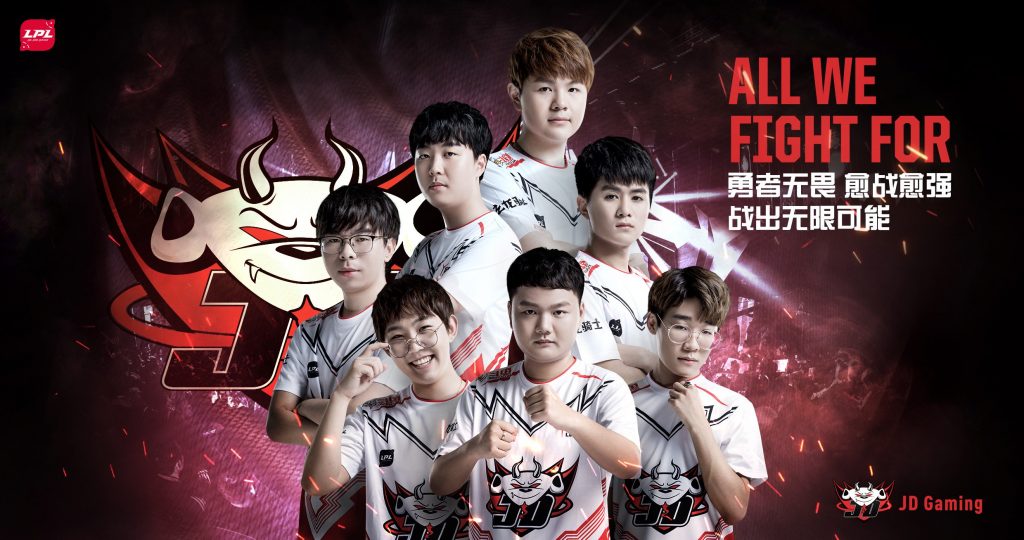 In the LPL, JD Gaming crushed Invictus Gaming this week, though both teams are still stuck in the middle of the pack. (Image via JD Gaming)

We’ve wrapped up week five of the LoL Pro League (LPL) 2019 Summer Season. JD Gaming crushed Invictus Gaming in a rematch of the Spring Season Finals, while Rogue Warriors picked up an upset win over LNG Esports. Let’s look at where things stand so far in the LPL Summer Season by looking at the top storylines so far in China.

IG gave Lee “Duke” Ho-seong his first play time of the season, so his Summer Season debut coupled with the continued loss of Song “Rookie” Eui-jin gave iG’s lineup a decidedly different feel than in the Summer Finals. That said, iG had ripped off three straight quality wins and looked to have resurrected their form with the return of Wang “Baolan” Liu-Yi to the starting lineup. Rookie mid laner Deng “Forge” Jie was coming off a monstrous performance against Suning, and while nowhere near the caliber of Rookie, looked to be a capable LPL mid laner in the interim.

JDG ADC Gu “imp” Seung-bin wasn’t impressed by iG’s improved form. The Korean carry carved them up in this series, finishing 11/0/4 in game 1 and then topping that with a 14/1/6 performance in game two. Baolan and Yu “JackeyLove” Wen-Bo had been the rocks for iG during their turnaround, but imp and Zuo “LvMao” Ming-Hao obliterated them in lane and in team fights this time around. Game one opened with a JDG 2v2 kill on Baolan in lane, a sign of things to come. LvMao had an impressive flash-taunt on Galio in game two to turn around an attempted gank by iG in JDG’s favor.

While most of the damage for JDG was being done in bot lane, Zhang “Zoom” Xing-Ran was doing work on Duke in top lane. After receiving a gank to get him going by Sung “Flawless” Yeon-jun in game one, Zoom solo killed Duke’s Ryze with his Renekton to punctuate the point that he would own the side lane in the series. Duke played ranged champions twice into Zoom’s Renekton, losing lane both times despite the range advantage and putting more pressure onto the rest of the map for iG. Forge did not play poorly by any means, but he does not yet possess the same ability to 1v9 as Rookie does, so iG could not survive their early struggles bot and top lane.

JDG are a force to be reckoned with when Flawless isn’t falling behind in the jungle and imp gets going. Though they are still only in tenth place in the LPL, they head to Rift Rivals in one of the best forms of the teams competing. As we saw in the Spring Season playoffs, a hot JDG is a team that can beat any in the world.

There hasn’t been a lot to like from the Rogue Warriors in 2019. After falling one game short of World Championship qualification in 2018, the team lost several key members in the offseason and went 4-11 in the 2019 Spring Season, good for 15th in the league. They lost their first four matches of the Summer Season and showed little hope for a turnaround, as they had yet to take even a single game in those four matches.

A surprising come-from-behind win against EDward Gaming brought optimism, but EDG were already into their tailspin after a disheartening loss to Invictus Gaming. So a second consecutive win against a top team, this time LNG Esports, lends more credence to an improved RW squad.

Bae “Holder” Jae-cheol, the lone Korean on the team, had a great series against LNG star top laner Li “Flandre” Xuan-Jun to help carry RW. Holder’s Gangplank was instrumental in stalling the game out for RW in game one, allowing them to come back and win in 49 minutes despite still trailing 12 kills to 13. For the series, Holder finished 13/8/19 on Gangplank and Aatrox.

ADC Mei “Zwuji” Hong-Hui also had a great series for RW, finishing with a positive kill/death ratio in every game, including a 13/3/9 pop-off performance in the deciding game 3 of the series.

It was a disappointing loss for LNG Esports after their 4-0 start to the season. Losses to Bilibili Gaming and now Rogue Warriors are not the type of losses you are accustomed to seeing from championship teams. LNG will require better play from their bot duo Lu “Asura” Qi and Duan “Duan” De-Liang to match the potential of their top half of the map.

LNG Esports will look to right the ship against a dangerous but inconsistent EDward Gaming squad in week six. The Rogue Warriors don’t play again until week seven when they face off against an improved Victory Five team, who are only one win away from matching their Spring Season win total of four.

Top Esports beat Team WE 2-1 cement their standing in second place as the region takes a break heading to Rift Rivals. Team WE continue their Summer Season slump and are now in sole possession of 15th place in the LPL, only one win separates them from the last place Vici Gaming.

TES’s Zhuo “Knight” Ding and WE’s Su “xiye” Han-Wei were the main attractions in this game, as both are typically head-and-shoulders above their teammates. Consider that they rank number one and two in the LPL in kill share among mid laners, a league dominated by excellent mid lane play.

They took turns carrying in the series. Knight started with 6/1/4 Jayce performance to put TES ahead in the series. Xiye fought back in game 2 by shutting down Knight’s Kassadin with Corki. Xiye finished 5/2/2 and, with a strong assist from jungler Jiang “beishang” Zhi-Peng, brought the series to a game 3. Both players played well in the final game of the series, but Knight’s bot lane destroyed Team WE’s so hard that xiye never stood a chance out of lane. Lee “LokeN” Dong-wook and Nam “Ben” Dong-hyun finished a combined 10/0/19 in game 3 to Jin “Mystic” Seong-jun and Lou “Missing” Yun-Feng’s 0/11/5.

Both Top Esports and Team WE face JD Gaming in their next match in week 6.

The LPL will take the weekend off to compete against the LCK, VCS, and LMS at Rift Rivals 2019 in Korea. The top four finishers from the Spring Season — Invictus Gaming, JD Gaming, FunPlus Phoenix, and Top Esports — will compete against the top teams from the other regions. The LPL look to be favorites as JD Gaming rounds into form and FunPlus Phoenix have a strong claim as the best team in the world. The event kicks off July 4 as JD Gaming takes on the Dashing Buffalo of the VCS.