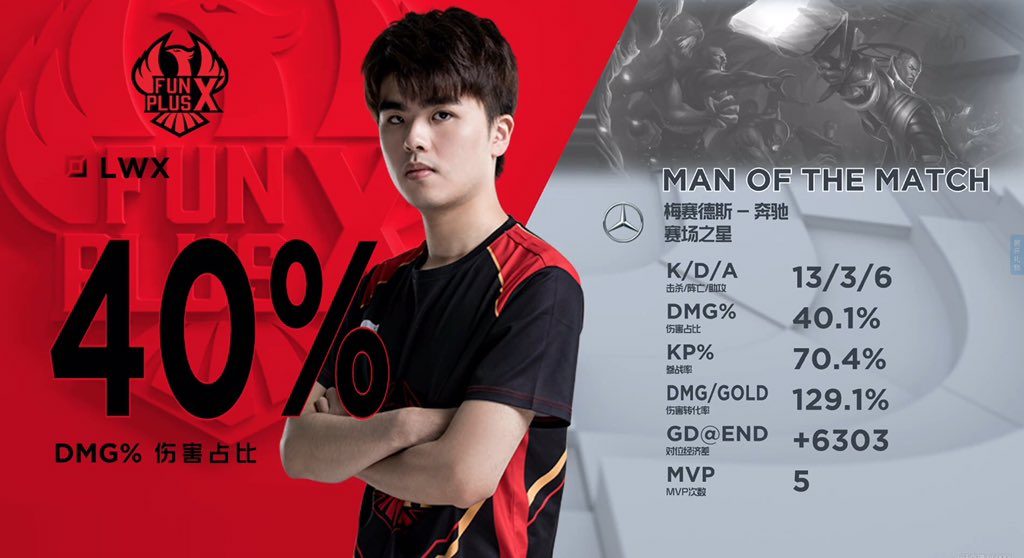 Funplus Phoenix - FPX - are looking very strong at this point in the LPL. (Image via @lplenglish / Twitter)

We’ve wrapped up week four of the LoL Pro League (LPL) 2019 Summer Season. FunPlus Phoenix are the last remaining undefeated team in the league, while Vici Gaming are the only squad left searching for their first win. Let’s look at where things stand so far in the LPL Summer Season by looking at the top storylines so far in China.

The LPL saved their best match of Week 4 for last as the two final undefeated teams, FunPlus Phoenix and Royal Never Give Up, squared off in a battle for first place. It was the first true test for RNG in the Summer Season after their offseason acquisition of Xie “Langx” Zhen-Ying, given the combined record of their first four opponents now sits at 4-19.

As well as the teams match up on paper, FPX dominated the series 2-0. Kim “Doinb” Tae-sang comfortably played his AD bruisers into Sylas twice, allowing FPX to give up the highly contested pick with no issue. Though they may not have dominated in lane, the bottom lane of Lin “Lwx” Wei-Xiang and Liu “Crisp” Qing-Song got the better of Jian “Uzi” Zi-Hao and Shi “Ming” Sen-Ming in the series. Lwx finished a deathless 19/0/8 over the two games, standing up to RNG’s biggest point of power.

FPX also heavily neutralized Langx, sending Gao “Tian” Tian-Liang top often to help Kim “GimGoon” Han-saem control the lane. RNG have never been a team to devote resources to top lane, and while Langx is more talented than his predecessors, he will have to learn to absorb pressure better as the season progresses. Langx finished 1/9/2 over the two games, making no impact for RNG.

With Invictus Gaming’s early struggles and the indefinite loss of Song “Rookie” Eui-jin, FunPlus Phoenix are the undisputed best team in the LPL. The development of Lwx as a big carry has helped relieve pressure from Doinb and complicates the plans of teams looking to shut FPX down. FPX just need to prove that they can hold up to the pressure of big events after falling short in the semifinals of the Spring Season.

FORGE COMES UP BIG FOR IG

Little was known about Deng “Forge” Jie before Rookie temporarily left the team, but the outlook for Invictus Gaming was bleak. They were losing their star mid laner after an already bumpy 1-2 start and no easy solution in sight. But instead of falling farther behind in the LPL, iG has ripped off three straight wins to surge up to sixth place.

Kang “TheShy” Seung-lok has stepped up his play again during the win streak and the reinsertion of Wang “Baolan” Liu-Yi cannot be understated, but these are proven world champions. That makes the play of Forge the most surprising and welcome development for iG over the past couple of weeks. Forge looked shaky in his debut against EDward Gaming, but never out of place.

In iG’s most recent game against Suning, Forge made his most definitive statement that he belongs in the LPL. Facing game 3 against a 4-1 Suning squad, iG locked Jayce for Forge against Huang “Maple” Yi-Tang’s Sylas. Maple may have been the best performing player on Suning, finishing the game 8/3/3, but Forge was the best player in the game. His Jayce finished 11/1/8, giving him half of iG’s total kills for the game in a dominating carry performance they desperately needed.

Invictus Gaming will welcome Rookie back with open arms when he’s able to return, but iG and their fans can rest assured that Forge is a more than adequate replacement in the interim.

EDG COOL OFF AFTER HOT START

EDward Gaming have dropped their last three games after starting the season 3-0. Dominating wins over JD Gaming and Bilibili Gaming inspired hope that EDG may have turned the corner heading into the Summer Season, but losses to the previously winless Team WE and Rogue Warriors mean more of the same inconsistency that has plagued the team for years.

At their best, EDG are one of the most dangerous and explosive teams in the LPL and the world. The problem is that they are rarely ever at their best. EDG fell 0-2 to Team WE and 1-2 to Rogue Warriors this week to fall back to 7th place in the standings. These are the teams EDG need to be beating with ease if they are truly a contender in the LPL.

The current iteration of their roster has never developed any semblance of mid to late game team fighting synergy and struggles when they cannot dominate the lane phase. Their individual talent and continued early game oriented meta makes them a continued threat, but always an incomplete one. EDG may require a roster overhaul in the offseason for the team to break through this barrier.

Two teams that are currently hovering around the edge of a playoff spot and figure to do so throughout the Summer Season. A win here will go a long way toward securing one of the eight spots.

Top Esports have something to prove after a weak early schedule and a surprising loss to Invictus Gaming with Forge. Team WE need to start winning now or will quickly be eliminated from playoff contention after a strong Spring Season.

A rematch of the Spring Season Finals. Both teams are riding a win streak after a disappointing start to the Summer Season. Invictus Gaming dominated the Finals, but look to be without Rookie again.