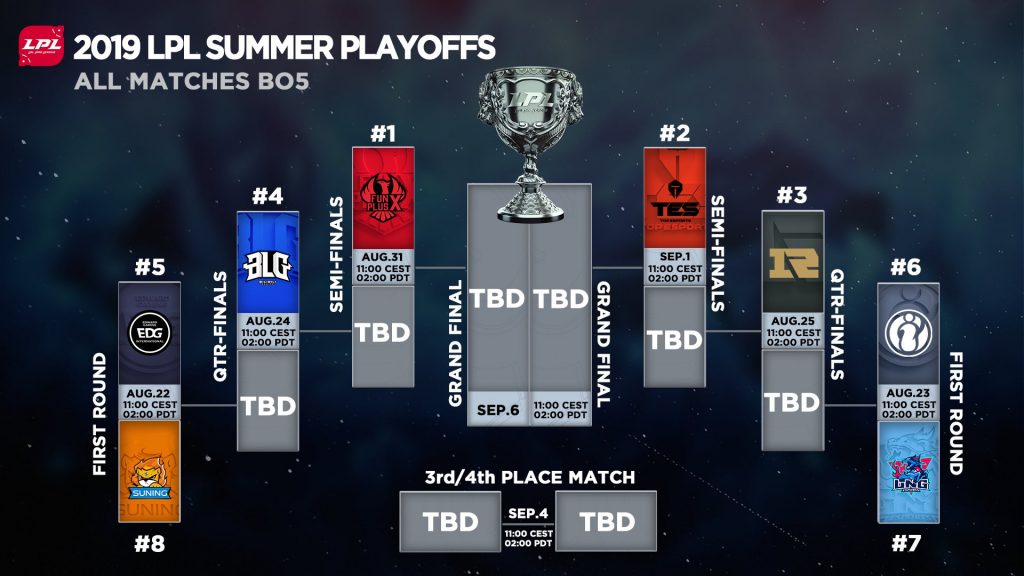 The LPL Summer Playoffs will climax on September 6. (Image via @lplenglish / Twitter)

The eight playoff participants will compete for three rewards at the LPL Summer Playoffs: the ¥ 3,500,000 Chinese Yuan prize pool, a domestic championship, and 2019 World Championship qualification.

Prize Pool: Postseason tournaments are one of the few ways for players to supplement their income with tournament winnings since pro teams are very restricted in their access to third party tournaments. There is prize money for each team making it past round one, broken down by placing as follows:

Domestic Championship: While international success is most remembered by the community at large, domestic success is incredibly important to fans of their home region. That is especially true in China, where teams have their own home venues and the competition is so fierce. Players like Kim “Doinb” Tae-sang and Zhuo “Knight9” Ding will feel pressure to capture an LPL championship.

The LPL will use the same playoff format from the 2019 Spring Season. Each series will be a single-elimination, best-of-five match in a fixed bracket. There will be no re-seeding or choosing of opponents in later rounds. Fifth-seed EDward Gaming opens the playoffs against eight-seed Suning in round one. Sixth-seed Invictus Gaming follows against seventh-seed LNG Esports.

First-seed FunPlus Phoenix will debut in the semifinals against the winner of the BLG quarterfinals series. Second-seed Top Esports will face the winner of the RNG matchup. Those semifinals winners will advance to the finals on Friday, September 6 for a best-of-five match at the Shanghai Mercedes-Benz Arena.

The LPL will play a third-place match for the semifinals losers, but will not play a fifth-place match, despite awarding 10 extra championship points over sixth place. Fifth place is awarded to the quarterfinals loser with the better Summer regular-season record.