LPL Summer Playoffs 2019: All the Teams 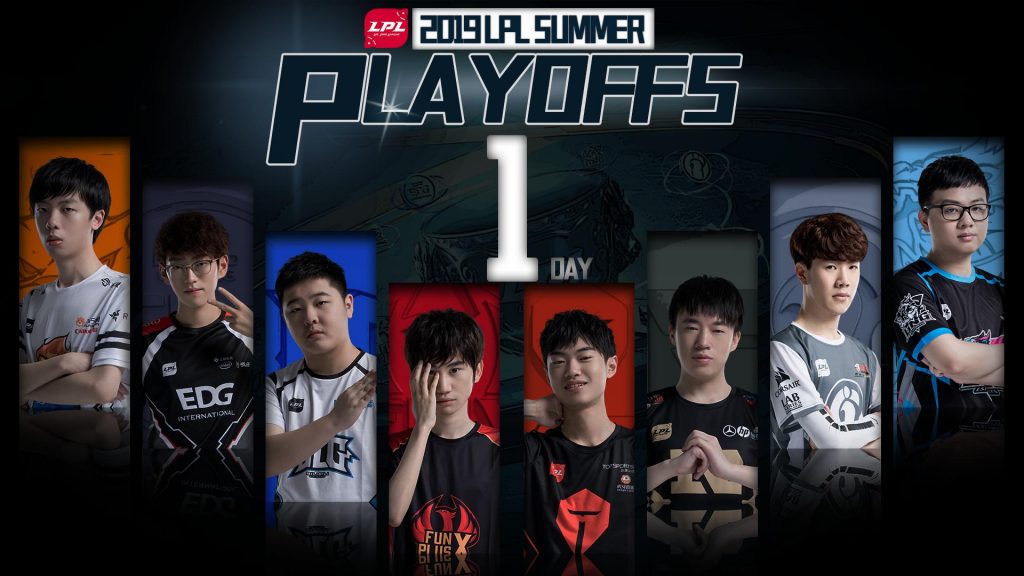 The LPL Summer playoff teams are ready to compete. (Image via @lplenglish / Twitter)

The 2019 LoL Pro League (LPL) Summer Playoffs are upon us. Invictus Gaming are the reigning World Champions, but they are hardly considered LPL Summer favorites in China’s deep league. We check in on current form, the playoff path that lies ahead, and one key player to watch for each LPL playoff team.

FunPlus Phoenix enter the Summer playoffs as the heavy favorites after a dominant 14-1 season. FPX’s only loss on the season was to Invictus Gaming, a team who have had enough issues over the second half of he season to experiment with roster changes. FPX dominated the second-seed Top Esports in the regular season finale despite role-swapping their mid and jungle for fun.

With great expectations comes great pressure, and no player will have greater pressure heading into the playoffs than FPX’s mid laner Doinb. He once again played at an MVP level, utilizing an insane champion pool to roam and coordinate with his team as the main shot caller. However, Doinb has fallen short in his career in the playoffs, winning only one of five series. This includes a shocking loss to JD Gaming in the semifinals of the Spring Season. All eyes will be on Doinb to carry himself and his team to an LPL title.

Top Esports had a great season to finish 12-3 to secure the second seed, but they don’t really feel like a true contender for the title just yet. Part of that may have to do with the beating they took against FunPlus Phoenix to end the season, but the young roster still has much to prove when the stakes are higher. Top Esports didn’t look particularly impressive against Invictus Gaming in the semifinals of the Spring Season, though they fared better than JD Gaming did in the finals. The team just doesn’t ooze confidence in the way the other elite LPL teams do, and it shows when they get in tight situations.

It will be on Zhuo “Knight9” Ding to change the narrative on Top Esports in the playoffs. He has played out of his mind this season, at times carrying the rest of his roster through slumps. Bai “369” Jia-Hao can be the secondary carry when he’s playing well, but the Korean bot lane of Lee “LokeN” Dong-wook and Nam “Ben” Hui-Dong have really struggled against the better bot laners in the LPL. Thus it falls on Knight to be the consistent point of power for TES, and it should be exciting to see what he has in store after a quick exit in the Spring playoffs.

Summer Split might be over, but we still got you covered with all the Royal action!

Experience our latest victory against JDG from @UziRNG’s eyes in his latest Youtube video! #RoyalNeverGiveUp

Their 5-5 record in their last 10 doesn’t look good, but it also isn’t as bad as it seems. Royal Never Give Up dropped games to JD Gaming, Invictus Gaming, and Dominus Esports while still winning those series. They did get crushed 2-0 by Bilibili Gaming, but they’ll try to erase that memory as they try to transition back away from Xiao “LoveZrr” Zhi to Xie “Langx” Zhen-Ying. RNG looked stronger at the beginning of the season, but their tough schedule down the stretch is a big part of why they were dropping more games.

The integration of Langx, or lack thereof, will be a defining factor for RNG’s 2019 postseason hopes. They aren’t winning the LPL or challenging for a Worlds title with LoveZrr in top lane. They need to find a way to play the game where Langx is free to play aggressively, but Langx also needs to reign himself in far more than he showed during the Summer Season. This iteration of RNG is potentially more talented than the 2018 team that steamrolled most of the season. They just haven’t figured out how to play around their new toy top lane, opting to throw all of their resources into Jian “Uzi” Zi-Hao as usual.

Bilibili Gaming are the hottest team in the LPL outside of FunPlus Phoenix, ripping off six straight series wins. In that span they beat Team WE, Invictus Gaming, and Royal Never Give Up, so they haven’t just been playing pushovers either. They may not be the mechanical gods you’ll see from the other top teams in the LPL, but their methodical, steady pace will remind of the best of the old LCK style.

Zeng “Meteor” Guo-Hao, who you may remember as Metoer after he unfortunately misspelled his name when submitting it to the LPL, has been doing the heavy lifting for the team so far this season. He is a resource heavy jungler who delivers, focusing on taking farm but putting that to use with one of the highest KDAs and kill shares among LPL junglers. When backed up by one of the more intelligent mid laners in Kuro and improved play by top laner Kang “ADD” Geon-mo, Bilibili Gaming have one of the stronger top sides in the LPL.

EDward Gaming have been up and down in the Summer Season after an uneven Spring, once again ending at 9-6 on the fringe of the playoff race. They closed the season with a promising win over their first round opponent Suning, but lost matches to Top Esports, FunPlus Phoenix, and Royal Never Give Up in the final weeks of the season. EDG has never missed the World Championship in their history, but they will need to catch fire like JD Gaming did in the Spring to have a chance at qualification.

The top side of Lim “Jinoo” Jin-woo, Zhao “Jiejie” Li-Jie, and star Lee “Scout” Ye-chan have been fantastic, but bot laner Hu “iBoy” Xian-Zhao will need to step it up for EDG to advance. iBoy is still only 19 years old and has an insane mechanical ceiling, but his performance has been as inconsistent as EDG in 2019. In positive news, iBoy and Tian “Meiko” Ye absolutely crushed Suning’s bot lane in their final match of the season, so they should have confidence heading into their first playoff matchup. If we see more of that going forward, EDG have a chance to keep their Worlds streak alive.

They just don't know how to quit, now do they? Gasp at the top 5 plays of @invgaming through the Summer Split! pic.twitter.com/B2DRYQdQDx

It’s been a tumultuous season for the 2018 World and 2019 LPL Spring champions. Gao “Ning” Zhen-Ning, Wang “Baolan” Liu-Yi, and Song “Rookie” Eui-jin have all been absent from the lineup at various times, be it for performance reasons or personal reasons. Invictus Gaming seems ready to go forward with that lineup again, however, based on their final match in the regular season. iG have lost three of their last five matches and are still searching for the team that was so dominant from 2018 Worlds to the 2019 Mid-Season Invitational.

The one rock for iG during the Summer Season has been Kang “TheShy” Seung-lok. He started off the season with a couple of “off” games for a player of his caliber, but he stepped up huge for the squad when Rookie had to step away from the team. TheShy can play any champion and any matchup in top lane, giving iG incredible flexibility in their drafts and some of the best top pressure in the LPL. iG have performed as underdogs before, as we saw when RNG was taking home all the hardware in 2018 before iG took home the ultimate prize.

LNG Esports may have won their last two matches to make it into playoffs, but the second half of their Summer Season has been far from impressive. Prior to those two wins, they had lost four matches in a row, including one to the 5-10 Victory Five. A tight 2-1 win over Vici Gaming and 2-0 win over a Suning team that had nothing to play for don’t inspire much confidence either, though LNG did make a roster change in those final two matches.

Huang “Fenfen” Chen replaced Bae “Plex” Ho-young, showing off an incredibly diverse champion pool in only five games. Lissandra, Renekton, Tristana, Qiyana, and Azir all have very little in common, other than the fact that they can be played mid lane. LNG is already strong in the side lanes with Li “Flandre” Xuan-Jun and Lu “Asura” Qi. LNG like to scale up and play for the late game, where Asura can play hyper carries and Flandre can split push and find flanks when needed. If Fenfen can hold up, LNG have a team that can pull some upsets.

Suning came into the Spring Season with high expectations and disappointed, finishing 6-9 to miss the playoffs. They managed to qualify for the Summer playoffs with a 9-6 record, but they closed the season with six consecutive game losses to playoff teams. The addition of Xiang “Angel” Tao turned Suning’s season around, giving them another potent laner and flexibility to mix and match with him and Huang “Maple” Yi-Tang.

Suning was much like the LCS’ Clutch Gaming, beating all the non-playoff teams but losing to every playoff team but Top Esports. To make good on the potential of a team that was expected to compete at the top of the LPL heading into 2019, Suning will be reliant on shot caller Hu “SwordArt” Shuo-Chieh to be a leader. He and Maple have the experience of making World Championship runs, so his guidance for players who’ve never gotten there like like Han “Smlz” Jin will be crucial.

With a playoff field as deep as the LPL’s, truly every team has the talent to make a run for the title — just look at JD Gaming’s 2019 Spring playoff run. A highly skilled champion is a given, but the team that hoists the trophy on September 6th will have come together as a team better than any other in the LPL. The best time of the LoL calendar is upon us.