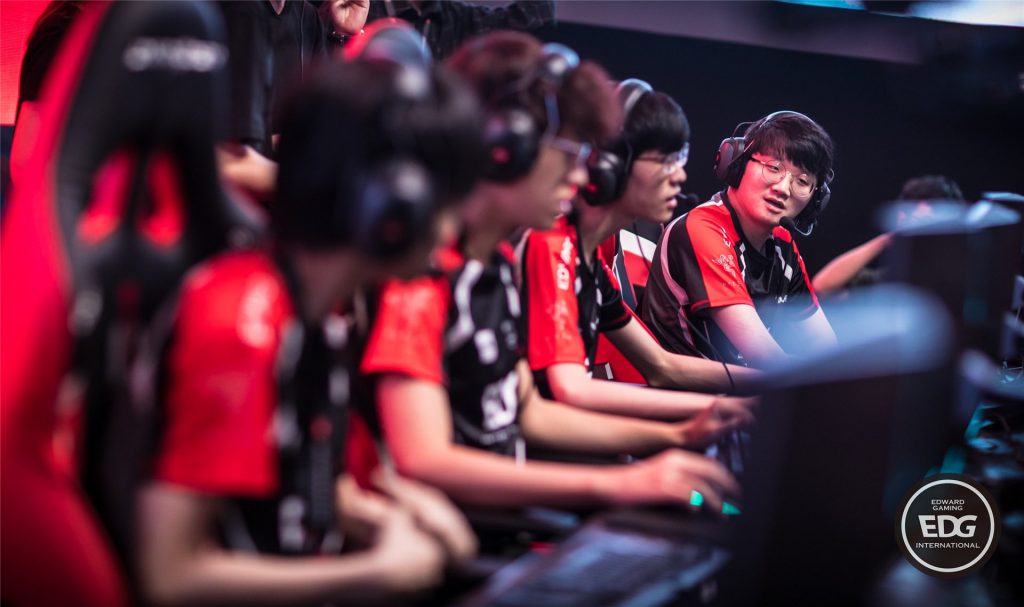 EDward Gaming and FunPlus Phoenix share the lead by the end of Week 2 in the LPL. (Image via EDward Gaming)

We’re in the middle of week 3 of the LoL Pro League (LPL) 2019 Summer Season. Eight teams sit atop the standings with 1-0 starts, while five teams have yet to win a match. We look at where things stand and the top storylines so far in China.

After making their way to the top of a sixteen-team league in the Spring Season, JD Gaming and Invictus Gaming find themselves a combined 1-5 in their first matches, including an abysmal 4-11 overall game record. JD Gaming were already in trouble when we last checked in and EDward Gaming gave them no break, crushing JDG 19 kills to 3 and 17 kills to 6 in consecutive games.

Invictus Gaming, however, won their first match of the season against Dominus Esports (formerly SinoDragon Gaming) before dropping consecutive matches to LNG Esports (formerly Snake Esports) and Victory 5. While LNG Esports didn’t make the playoffs last season, they’ve had the potential to be good and have shown a new level of play since inserting Bae “Plex” Ho-young into the starting lineup. Li “Flandre” Xuan-Jun remains one of the best top laners in China and the roster is one that now aspires to make the playoffs.

Victory Five, on the other hand, are not a contender in the LPL. Fresh off a 4-11 Spring Season—good for 13th in the LPL— 5 dropped their first two matches against non-playoff teams LGD Gaming and Bilibili Gaming to start the season before pulling off their stunning upset of iG. Even a struggling version of iG should be able to handle V5.

Li-Tan “Lucas” Pan-Ao continued to get the start in every game for iG, but it has to be time for iG to consider moving Wang “Baolan” Liu-Yi back to the active roster. Even if Lucas is the future for iG, there has to be something said for Baolan coming back as a stabilizing force on the roster, especially as the 2018/2019 version of iG has never struggled to this extent. Another option would be to temporarily sub in Lee “Duke” Ho-seong for Kang “TheShy” Seung-lok, as iG often did in 2018. iG have to find an answer soon or risk falling into too deep of a hole in an increasingly competitive LPL landscape.

Renekton as a mid laner has been picking up steam in the LPL, thanks to the wizard Kim “Doinb” Tae-sang, pioneer of Righteous Glory Ryze among other innovations. Renekton has a very favorable matchup into both Irelia and Sylas — powerful flex picks that often end up in mid lane. As a traditional top laner, Renekton can follow the Irelia or Sylas to whichever lane they end up in and should crush the lane.

Now to be fair to Kuro and Renekton, neither of the games were competitive. EDG won game 1 in 23 minutes and game 2 in 26 minutes, out-slaying BLG 40 kills to 5 in the series. There probably isn’t a champion in the game that Kuro could have done better on with the aid that Zhao “Jiejie” Li-Jie was providing mid lane, coupled with the collapse of the other games. But for Renekton mid to work going forward, the teams using him will have to straighten out their early game. Without a punishing lane phase, Renekton mid is strictly a liability.

A so-so Spring Season by EDward Gaming was capped by a 0-3 sweep to the hands of SinoDragon Gaming in the first round of the playoffs. As good as they were mechanically, the team still had issues with team fighting and generally clicking as a five-man unit.

Two key changes heading into the Summer Season have made EDG look like a dominant force again in the LPL. First, Jiejie was inserted as the starting jungler over Ming “Clearlove” Kai. Clearlove has a world of experience and is one of the greatest junglers in LPL history, but his performance has declined over the years and a fresh presence was needed. Jiejie, in an admittedly small sample size, has given EDG exactly what they’ve needed by applying pressure in the early game to allow his laners to thrive.

The other change was bringing in Korean import Lim “Jinoo” Jin-woo from Victory Five in top lane. Jeon “Ray” Ji-won stepped down for a temporary rest, so it remains to be seen whether the change is permanent, but the early results from Jinoo are promising. Jinoo has shown the range to play tanks, assassins, and bruisers alike, offering more versatility to EDG than Ray had offered in previous seasons. If Ray wants to return to the starting lineup, he must prove he can pilot a diverse champion pool like Jinoo has already shown.

Invictus Gaming have suffered back-to-back defeats and look out of sorts as they transition from Baolan to Lucas. EDG have blown teams out of the water to start the Summer Season but face a team that can match their laning power.

FunPlus Phoenix versus Team WE

FPX are off to another hot start in the regular season, once again led by their mid laner Doinb. Team WE need a win after finding themselves tied for last place. Team WE are surprisingly struggling after they had such a hot finish to the Spring Season.

Suning have started strong again, this time without the services of Xie “Langx” Zhen-Ying. They look to keep it rolling against the struggling JD Gaming. Might this be the time for Griffin trainee Seo “Kanavi” Jin-hyeok to debut in jungle for JDG?