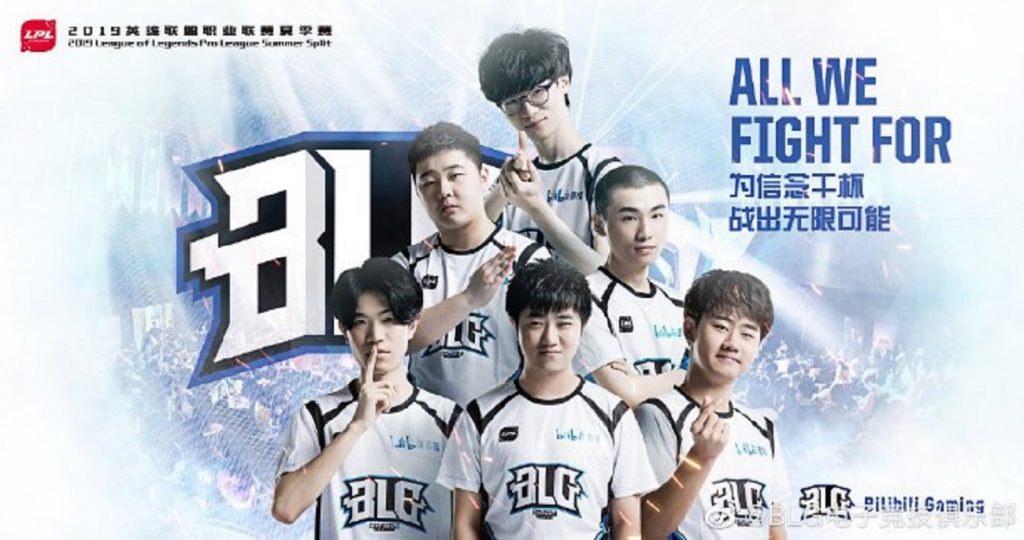 In week one of the LPL, Bilibili Gaming are among the four teams off to an early lead. (Image courtesy of LPL)

After an abbreviated week 1, we’re in the middle of week 2 of the LoL Pro League (LPL) 2019 Summer Season. Eight teams sit atop the standings with 1-0 starts, while five teams have yet to win a match. We look at where things stand and the top storylines so far in China.

Invictus Gaming returned to the rift after the 2019 Mid-Season Invitational without a familiar face. Support Wang “Baolan” Liu-Yi was not in the starting lineup for the first time in his tenure, save for the lone game famous hot-dog-eating iG owner Wang “WXZ” Si-Cong played with the lineup for fun against Vici Gaming at the end of the 2018 Summer Season. In his place appeared Li-Tan “Lucas” Pan-Ao, a previous member of Invictus Gaming Young, iG’s academy team.

The move comes after Baolan had a rough time at MSI, particularly in the semifinals against TL. Outside of iG’s one win on his signature Rakan, Baolan combined for a 0/19/22 K/D/A in the other three games and did not create plays with jungler Gao “Ning” Zhen-Ning around the map.

Sunning and Invictus take down their opponents today in matches that went the distance. Here are you're MVP's of the Day: pic.twitter.com/I0E5j3MkBW

Lucas had a fine debut against Dominus Esports, showing proficiency on the melee tank supports that dominate the current meta. His Taric, Galio, and Braum combined for a 2/8/23 K/D/A in his debut series. It will require time to build synergy with rising star Yu “JackeyLove” Wen-Bo, but Lucas didn’t look overwhelmed in his first match on stage.

What this change means for Baolan remains to be seen. Remember that iG had to convince Baolan to stay with the team after he announced his intention to move on following the 2018 World Championship. Baolan felt undervalued for his contributions to iG’s title run before ultimately being reassured that iG thought he was an important member of the team. Baolan’s contract runs through the end of 2021, so iG would have to cooperate if Baolan wants to find a new home.

There was a lot of optimism for JD Gaming heading into the Summer Season after their surge to the Finals in the Spring. While they have a very high ceiling, we were tempered in our expectations in our season preview, in large part because of the inconsistency they displayed over the course of the Spring Season.

Unfortunately for JD Gaming, many of those fears were realized in their first two matches. FunPlus Phoenix obliterated JDG in the semifinal rematch, winning by kill counts of 17-2 and 25-5. Things didn’t get much better against LNG Esports, as JDG fell 2-1 to a Spring Season non-playoff team.

There’s no reason for JDG to hit the panic button yet. As we’ve continually talked about, JDG have been a streaky team and they got better as the Spring Season progressed. FunPlus Phoenix are once again a top contender, and LNG Esports look much better with Griffin trainee Bae “Plex” Ho-young manning the mid lane.

However, the flaws that were on display in the Spring also are still there. Sung “Flawless” Yeon-jun played well at the end of the season and into the playoffs, but was a huge liability in the opening matches for JDG. They also still need mid laner Zeng “Yagao” Qi to take a step forward — in part to help Flawless in jungle, in part to help take some pressure from star top laner Zhang “Zoom” Xing-Ran. Griffin trainee Seo “Kanavi” Jin-hyeok waits in the wings if JDG make a change at jungle.

As expected, former Suning top laner Xie “Langx” Zhen-Ying (formerly known as XiaoAL) got the start over Shek “AmazingJ” Wai Ho against Team WE. Though one series is obviously a small sample size, we got to see that the RNG drafts will be more dynamic with Langx’s presence in the lineup.

Awesome work to our MVP this match, Karsa! pic.twitter.com/zlG6Ylsz5e

While playing with AmazingJ, and to some extent Liu “Zz1tai” Zhi-Hao, RNG primarily drafted a tank or ranged bully in the top lane. A lot of Poppy, Kennen, Urgot, Ornn, and champions of that nature. But in Langx’s debut, RNG put him on Irelia and Akali, two champions that require a high level of mechanical skill with the capability of carrying the game. It’s clear in the early going that RNG will use Langx for what he is — a playmaker.

His ability to play flex picks like Akali will also open up many more possibilities in the draft for new coach Chou “Steak” Lu-Hsi. RNG picked Akali only once in 2019, putting Li “Xiaohu” Yuan-Hao on her. In their first series of the Summer Season, RNG picked Akali both games, giving her once to Xiaohu and once to Langx. That kind of solo lane flexibility gives teams a huge advantage in drafts and will finally allow RNG to compete with the other solo lane dominant teams in the league.

Will Lucas get another start for Invictus Gaming, or will Baolan return to the starting lineup? We get our first look at Plex against Song “Rookie” Eui-jin.

EDG will try to make their way back to Worlds with a revamped top half of the map. JD Gaming need to beat a perennial playoff team to avoid an 0-3 start to the season.