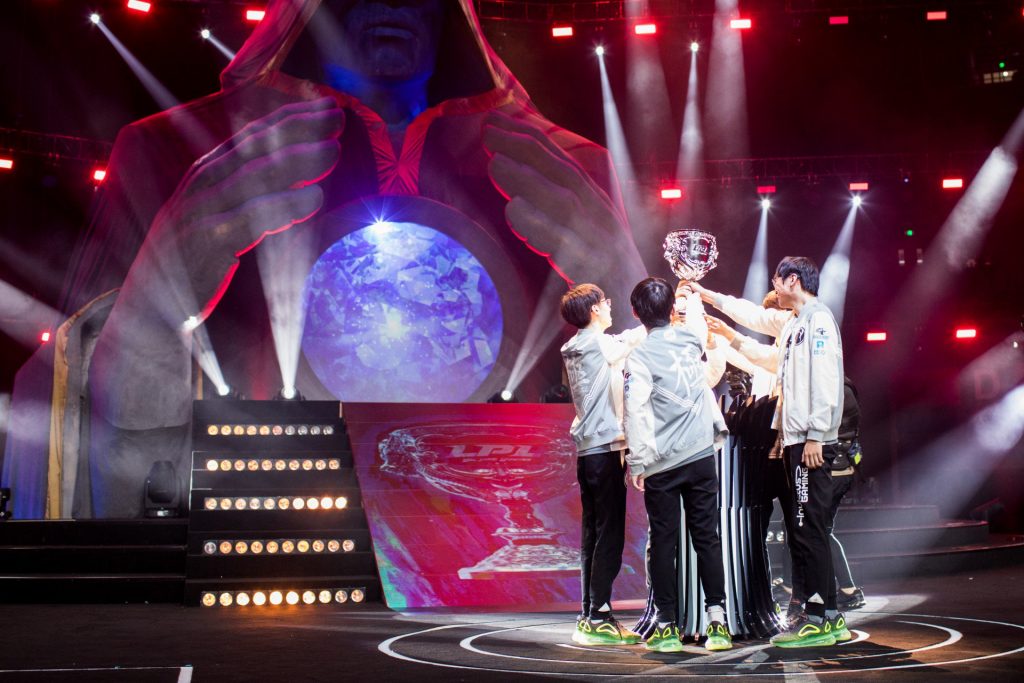 Invictus Gaming crushed JD Gaming 3-0 to win the 2019 LPL Spring Split Finals at the Foshan International Sports Performing Arts Center in Foshan, Guangdong. Fresh off their 2018 World Championship, Invictus Gaming returned all five starters to win their first domestic title. Next up will be the Mid-Season Invitational, where they will again compete against the best teams in the world.

Congratulations to @invgaming on winning the 2019 #LPL Spring Finals and qualifying for the 2019 Mid-Season Invitational! #MSI2019 pic.twitter.com/sPQQog4VeL

JD Gaming opened with an interesting decision in champ select of game one. They won the coin toss for side selection before the series, opting to start on red side. That strategy almost always boils down to saving the final counter pick for a star player, while conceding first pick to the enemy team. JD Gaming did save their final pick for Zhang “Zoom” Xing-Ran, but instead of finding a counter pick, JDG put him on a tank in Ornn into Kang “TheShy” Seung-lok’s Ryze.

Not only did that not grant JDG any advantage in that lane, it cemented three losing lanes and a losing jungle matchup against Invictus Gaming’s superior laning. The plan for JDG was to hold on until they could out scale iG, but that was too tall of a task for JDG.

Yagao teleported bot at 11:30 to try to catch out an overextended Yu “JackeyLove” Wen-Bo, but JackeyLove committed to killing Gu “LvMao” Seung-bin’s Braum and bought enough time with his Xayah Featherstorm to allow TheShy’s Ryze to teleport in. JackeyLove fell, but iG picked up three kills in total to blow the game open with a 3K+ gold lead. Another fight over Rift Herald at 15 minutes ended with a five for two ace for iG and a quadra kill on Rookie’s Zoe.

iG forced Baron at 21 minutes, leading to Sung “Flawless” Yeon-jun’s Nocturne engage for JDG. JDG were unable to catch out anyone on their initial engage. Baolan had an incredible Rakan counter engage to CC JDG’s squad and allow iG to turn it back around. iG aced JDG 5-0, secured Baron, and held an 8.5K gold lead at only 21 minutes.

With two inhibitors down at 26 minutes, JDG made their final stand at their top inhibitor turret. iG were just too strong and easily repelled the engage, using TheShy’s portal to chase JDG under their own double Nexus turrets. iG took game one in 27 minutes, up 18 kills to 7. Baolan was named game one MVP for his 0/0/18 Rakan.

Once again JDG picked Zoom a tank — this time Sion — into a carry from TheShy, and once again JDG got rocked in the early game. It started out fine for JDG, as Ning got over aggressive in Flawless’ jungle and was punished by a collapse for First Blood. JDG even got Rookie’s flash when he failed it trying to pick up a response kill on Flawless. Flawless also got an early infernal drake, though JDG didn’t have the best lineup to make use of it.

But Ning, as he often does, camped for TheShy and made sure his Jayce got ahead of Zoom’s Sion. His second gank on Zoom set him far behind in gold and experience, allowing TheShy to gain enough of an early advantage to continue dominating the lane. At the same time, Rookie’s Ryze used his ult bot to secure JackeyLove’s Kai’Sa a kill on Gu “Imp” Seung-bin’s Varus. iG were making odd-numbered plays on both sides of the map without a response from Flawless or Yagao.

iG turned around every attempted JDG gank for the next few minutes, starting with a teleport from TheShy bot lane and ending with a three-man counter gank on Flawless mid lane at 12 minutes. iG were up eight kills to one and 3.3K gold at 12 minutes, once again ripping apart JDG’s early game.

Baron at 23 minutes was enough for iG to siege for the win and take game two without issue. TheShy was named game two MVP for his 8/0/5 Jayce, but give an assist to Ning’s Sejuani for unlocking him in the laning phase. JackeyLove and Baolan finished game two deathless in iG’s 21-to-4 kills win in 26 minutes.

JDG finally put Zoom on a carry in game three, locking him Jayce in their first pick phase. But as they had all series, iG early picked Ryze as a flex pick, allowing TheShy to pivot to his preferred Vladimir pick into Jayce.

Flawless’ Rek’Sai early ganked bot to give Imp’s Kai’Sa a kill at three minutes and put pressure on iG’s bot lane, but that pressure was short-lived. Flawless tried a repeat gank as JackeyLove walked behind his turret back to lane, but iG’s duo turned it around. Baolan’s Tahm Kench ate up JackeyLove’s Draven to survive the initial burst of damage.

They then turned to the offensive as JDG tanked the turret. JDG could not finish either kill as JackeyLove used both summoner spells and Draven got to free hit JDG until all three were dead. JackeyLove picked up two of the three kills — Baolan the other — and JDG’s promising start bot turned into a nightmare.

Flawless didn’t let that failure deter him. He continually ganked mid lane, helping a struggling Yagao but also picking himself up three kills in the process. The rest of JDG were struggling, but Flawless was keeping them in the game.

iG executed a perfect three-man dive at 11:30 to feed JackeyLove another three kills, making him 6/1/2 under 12 minutes into the game. That would give iG just enough firepower to overcome Rookie’s weakness in the mid lane.

JDG picked up consecutive three-kill fight wins and evened up the game at 11 kills apiece at 13 minutes. Zoom looked more comfortable on a carry, Yagao was finally ahead of Rookie thanks to the camp from Flawless, and Imp hadn’t been completely shut out of the lane despite JackeyLove’s lead. Another skirmish win led to JDG securing Baron at 22 minutes, up 17-13 in kills and 5.6k in gold.

JDG attempted to siege bot inhibitor turret at 24 minutes, but Imp made a crucial mistake. He stepped too far forward and TheShy recognized his opportunity, dumping all of his spells on Imp to one-shot him and stop JDG’s siege. Without their ADC, JDG had to retreat and were run down by Ryze and Tahm Kench ults. iG were back in the game.

JDG tried to siege mid with Flawless’ remaining Baron buff, but the shutdowns given to iG in the previous fight made them that much stronger. iG picked up a kill, JDG walked away with nothing, and iG had the scaling advantage as the game dragged on.

A skirmish mid lane at 30 minutes went one for one, but iG were left healthier and were able to secure Baron afterward. Zoom teleported mid to take the inhibitor turret, but he and Imp died in the process of their desperation play. iG, though they had just evened the gold, were now firmly in control of the series clincher.

iG executed a 4-1 split with Baron buff to close out the game and series. JDG sent Yagao and Flawless to kill Rookie in the side lane, but the rest of iG just marched into JDG’s base. JDG had a 5v4, but iG had already knocked down 1 Nexus turret by the time JDG could engage. Nobody from iG died in the initial burst, allowing Vladimir to get his full spell rotation off and delete JDG’s lineup. JackeyLove’s Draven cleaned up the rest, and iG secured their first domestic title.

TheShy was named game 3 MVP for his 5/4/9 Vladimir performance, crucially finding the pick on Imp to prolong the game. He was then named player of the series after finishing a combined 17/7/23 across Ryze, Jayce, and Vladimir.

JD Gaming fell short of their ultimate goal, but will be rewarded with an invite to 2019 Rift Rivals for their successful Spring Split. Imp and Flawless have solidified their spots in the lineup and JDG can move forward in further building their team synergy with a set lineup.

Invictus Gaming will move on to be China’s lone representative at MSI, earning an auto-berth into the Main Event. They will be the early favorites coming off their 2018 World Championship and dominance in the LPL playoffs, showing no glaring weaknesses in their game as their bot lane continues to impress.