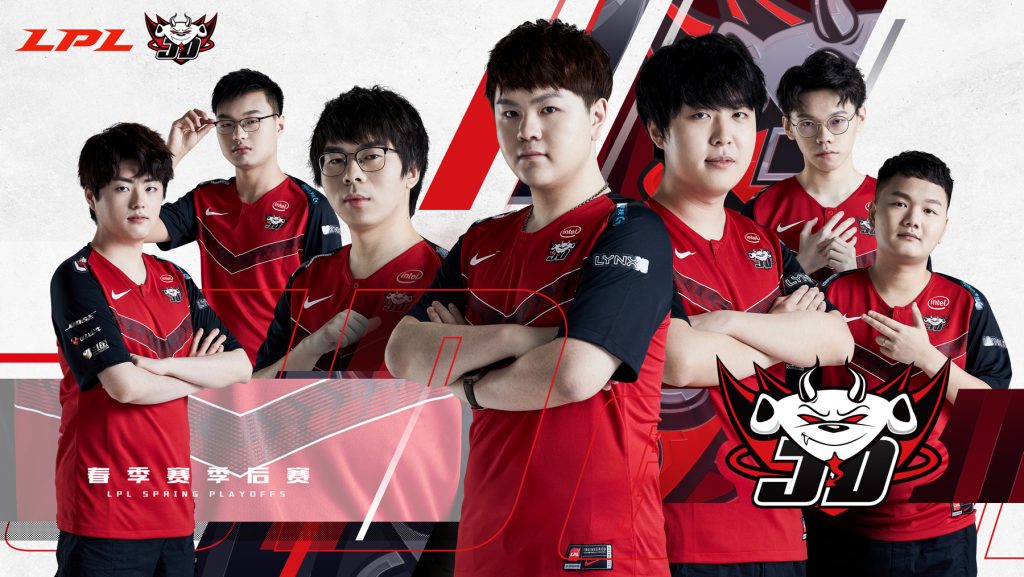 JD Gaming will look to beat Top Esports again in a rematch of the Spring Split Finals. (Photo courtesy LPL)

The LPL playoffs continued on with the semifinals of the Summer Split. Top Esports and JD Gaming both prevailed, setting up for a rematch of the Spring Split Finals. Meanwhile, the LPL Regional Finals bracket is set to determine the league’s final two World Championship berths. We take a look at where things stand in the LPL by looking at the top storylines so far in China.

JD Gaming and Top Esports were the two best teams in the LPL in the Spring Split. They finished a combined 23-9 in the regular season, but even that was underselling how well they did. JD Gaming missed top lane star Zhang “Zoom” Xing-Ran for most of the split, while Top Esports didn’t get Yu “JackeyLove” Wen-Bo into their starting lineup until the final week of the regular season. With their pieces firmly in place, the two teams were even better.

That carried on into the playoffs. Top Esports beat Team WE 3-1 and Invictus Gaming 3-1 to reach the Finals, while JD Gaming swept reigning World Champions FunPlus Phoenix 3-0 in the semifinals. The two then played an epic five game series in the Finals, with JD Gaming eventually coming out on top. Though Top Esports fell short, they picked up a title of their own at the Mid-Season Cup to even the score.

Though both teams went through their own ups and downs in the Summer Split regular season, they ended up one and two in the standings. In the LPL, that means a double bye in the playoffs, automatically seeding TES and JDG in the semifinals. Both of them took care of business in their matches, setting up a rematch for the Spring Finals.

Tonight we took down SN with a clean 3-0 and made it to the Worlds for the first time!
Game 1 MVP: 369
Game 2 MVP: Karsa
Game 3 MVP: JackeyLove#TESfighting pic.twitter.com/8nmKRqUniw

Top Esports wasted no time in dispatching Suning 3-0. Game one was a 22 kill to 5 stomp in only 27 minutes, setting the tone for the series. Suning put up more of a fight in games two (15 kills to 21) and three (15 kills to 20), but Top Esports were too strong individually for Suning.     Bai “369” Jia-Hao had one of his best matches of the year, going 17/8/20 across the three games. Zhuo “knight” Ding also did not disappoint in a chance to clinch his first World Championship berth, going 10/4/31.

JD Gaming didn’t quite pick up a 3-0 over LGD Gaming, but it looked like it would be in the early going. JDG picked up a slower, controlled game one win behind Zoom’s 6/0/9 Ornn in 35 minutes. JDG then picked up the pace in game two, crushing LGD 20 kills to 3 in a ridiculous 24 minutes. LGD Gaming made sure there wouldn’t be a sweep with an impressive show of fortitude in a game three win, but LGD closed it out in game four. Spring MVP Seo “Kanavi” Jin-hyeok earned player of the game in JDG’s first two wins, going a combined 12/4/18 in those two games.

Now, with JDG and TES making consecutive Finals appearances, both teams have clinched their World Championship berths. Not only is it the first for both organizations, it will be the first appearance for arguably the two best players in the world never to have made it in knight and Zoom. That’s a win for fans of League of Legends in general.

Top Esports beat JD Gaming 2-0 in their only matchup in the Summer Split, but that was all the way back in week two. One interesting thing to note: the two previous LoL World Champions in Invictus Gaming and FunPlus Phoenix had Korean imports as their solo laners. However, both JD Gaming and Top Esports have native players in their solo lanes. The great mechanical talent in China is delivering on its potential.

THE REGIONAL FINALS ARE SET

With Top Esports and JD Gaming both already qualified for the World Championship and both in the Finals, the Regional Finals bracket is already set. With four Worlds berths this year, the LPL will have three matches for the final two spots. Suning will take on LGD Gaming in the first match, with the winner qualifying to the Main Event as China’s third seed. The loser, however, would not be eliminated. They would then go on to play the winner between Invictus Gaming and FunPlus Phoenix for the fourth seed. The fourth seed would join the Play-In stage in the tournament.

Suning and LGD Gaming will get the action kicked off. Suning swept LGD Gaming 2-0 in week five of the regular season and were the more consistent team in the regular season, finishing 12-4 to LGD’s 10-6. However, LGD has looked like the more dangerous team in the postseason. After beating Team WE 3-1, LGD crushed Invictus Gaming 3-0 and took a game off JDG. Suning ended Victory Five’s dreams of a miracle run, but were then soundly beaten by Top Esports in the semifinals. Suning are more likely to put together a steady performance, but LGD’s peak looks a level above Suning’s at present.

We will reflect on this loss. See you in LPL 2020 Regional Finals that starts on Aug 28th.#FPX #FPXLOL #LPL2020 pic.twitter.com/FmdABST46w

The match between Invictus Gaming and FunPlus Phoenix guarantees that one of the two previous World Champions will not be present in 2020. Both quickly flamed out in the playoffs — FunPlus Phoenix in round one to Victory Five and Invictus Gaming in the quarterfinals to LGD. iG had a much better regular season, going 12-4 to FPX’s 9-7. iG also won the regular season matchup 2-1, though it was all the way back in week five.

With Kang “TheShy” Seung-lok looming as a huge threat, FPX has to decide on their top laner one more time. Kim “Khan” Dong-ha was brought in from T1 in the off-season to win matchups like this, but the team has continually played better with Kim “GimGoon” Han-saem. GimGoon played the finals two weeks of the regular season and all four games in the playoffs, so he has the more recent reps with the team. FPX have been reluctant to mix and match the two top laners in the middle of a series, so whoever starts will probably play all the games. That decision could alter FPX’s Worlds fate.

The LPL playoffs will continue on with the final two matches. After falling in the semifinals, LGD Gaming and Suning will play in the third place match for side selection in their Regional Finals match. Their playoff match will take place on Tuesday, August 25th at 2 a.m. PST. That will be followed by the Grand Finals between Top Esports and JD Gaming on Thursday, August 27th at 2:30 a.m PST.