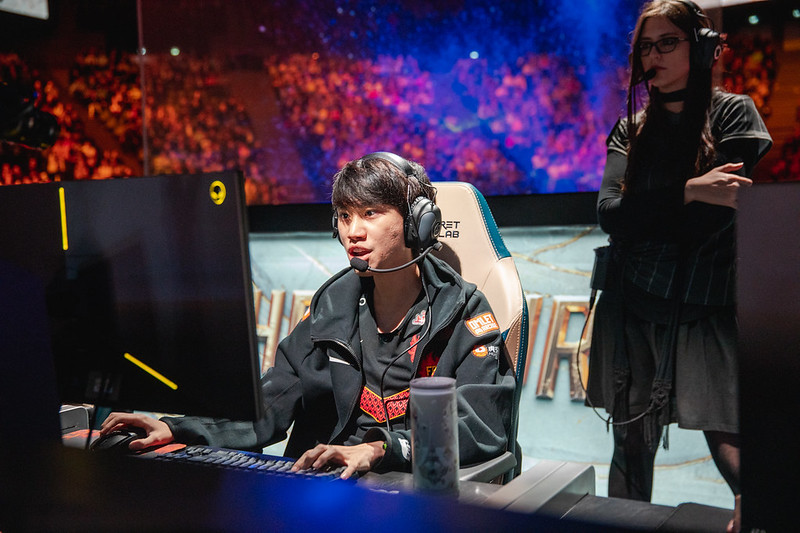 FunPlus Phoenix are back in the semifinals after a 3-1 win over EDG. (Photo courtesy Colin Young-Wolff - Riot Games)

We’re halfway through the LoL Pro League (LPL) 2020 Spring playoffs. FunPlus Phoenix and Top Esports are in the semifinals after round 2 wins. Meanwhile, eStar and Royal Never Give Up were knocked out earlier than expected in round 1. We take a look at where things stand in the LPL by looking at the top story lines so far in China.

FPX IN THE SEMIFINALS

It hasn’t been the smoothest of rides for FunPlus Phoenix in 2020. They opened the season with two consecutive losses before going on a nine match win streak. FPX then dropped matches against Vici Gaming and Top Esports to fall out of the second seed, losing their double-bye.

We made it to the semi-finals! Congrats to @Doinbmid, who today not only got his second penta kill, but also reached the 1500 LPL kills milestone in his career! #FPX #FPXLOL #LPL2020 pic.twitter.com/gaUwbuUHgF

All the while, FPX have been dealing with a roster issue that most teams would envy. Kim “Khan” Dong-ha joined from T1 in the off-season, a move that FPX hoped would bolster their carry potential in top lane. Khan definitely has the capability to do that, but the team has not clicked with him in the starting lineup. Of the five matches FPX started Khan in the regular season, they lost three of them.

Those results have forced Kim “GimGoon” Han-saem back into the starting lineup. Though he’s never offered the same hard carry potential as Khan, GimGoon is one of the best weak side players in the world. His ability to sacrifice his pick order and lane for FPX is what made him such a key piece in their 2019 World Championship run.

The unselfishness was on display in FPX’s 3-1 win over EDward Gaming. Of the four games GimGoon laned against Zhao “Aodi” Ao-Di, GimGoon had three bad matchups — Aatrox into Sett, Aatrox into Renekton, and Aatrox into Ornn. In those three games, GimGoon went a combined 4/9/11, but he did his job. When he finally got to play on the winning side of the Poppy into Aatrox matchup, GimGoon went 3/0/5 and led Aodi by 23 CS.

You just can't give this man Ryze! A penta-kill for @Doinbmid and @FPX_Esports look like they're going 2-0 in this series! #LPL

GimGoon wasn’t the only reason FPX won, of course. Kim “Doinb” Tae-sang did what he does best: play mid laners with global ultimates. He opened the series with a 2/0/11 Twisted Fate game, followed by three consecutive games on his famous Ryze. While he might not go Righteous Glory anymore, it’s still as potent as ever. That was obvious as he picked up a pentakill in FPX’s game two win.

The oft-maligned ADC Lin “Lwx” Wei-Xiang had an excellent series as well. He kicked things off a 10/0/5 Aphelios game, followed by a 5/2/13 Lethality Varus and 4/1/6 Miss Fortune in their wins.

FunPlus Phoenix now advance to take on JD Gaming in the semifinals. JD Gaming were the beneficiaries of FPX’s season-ending loss to Top Esports. FPX beat JD Gaming 2-1 in week two of the regular season.

TOP ESPORTS ADVANCE OVER TEAM WE

Top Esports’ win over FunPlus Phoenix did just enough to catapult them into a first-round playoff bye. Top Esports took full advantage, beating Team WE 3-1 to advance to the semifinals.

Things actually didn’t start well for TES. Despite deathless scores from both Zhuo “knight” Ding (3/0/5) and Yu “JackeyLove” Wen-Bo (5/0/4), Team WE found a late pick onto Bai “369” Jia-Hao’s Kennen to earn them Baron and Infernal Soul. With those objectives, Team WE stole game one off TES 13 kills to 11 in 41 minutes.

But things returned to expected as TES took the final three games of the series. TES speedran a 22 minute game two win, Knight’s Syndra bullied Jiang “Teacherma” Chen’s Rumble to a 1/11/7 performance in game three, and Knight’s unstoppable Corki participated in 15 of 16 kills (9/1/6) to close it out in game four.

Knight finished an astounding 27/3/33 across the four games. For as well as Teacherma has fit into Team WE, that was one of the biggest individual player gaps we’ve seen in the LPL. With JackeyLove’s addition serving the dual purpose of strengthening TES’ bot lane and unlocking Hung “Karsa” Hao-Hsuan, Knight is again able to bully his mid lane opponent while being camped less often.

TES will get a matchup with JackeyLove’s former teammates in Invictus Gaming. iG won the first meeting 2-0 in week three, but that was before JackeyLove came aboard.

eStar had one of the most exciting inaugural seasons in LPL history. They opened the season by winning their first four matches, including a 2-1 win over reigning champions FunPlus Phoenix in week one. Their momentum didn’t stop, as they then beat Invictus Gaming to open the season 9-1 and in sole possession of first place.

Unfortunately, the rest of the regular season was not as kind to them. A loss to Vici Gaming in week five opened the floodgates. eStar went only 2-4 to close out the season, dropping all the way down to fifth place. That forced them to play in the opening round of the playoffs, where they took on Team WE.

eStar could not recover from their late season swoon, losing 3-1 to Team WE. eStar were able to pick up their first playoff game win in history in game three, but that will be of little consolation after losing the series.

eStar kept all three losses relatively close, but their team fighting failed them in crucial moments. It didn’t help that their top side of the map was often outscaled by Team WE’s, but Yan “Wei” Yang-Wei especially struggled in fights.

A big part of that could be the target banning coming Wei’s way. After playing Jarvan IV in most of his first 10 matches, Vici Gaming banned him away when they upset eStar in week five. Jarvan IV has since been banned every single game against Wei, including all four games in this series by Team WE. Forced onto champions that require more nuance in team fights, Wei has not had the same impact.

All that said, eStar still had a very successful first season in the LPL. They had memorable upsets, sat atop the standings, made the playoffs, and won a game in the playoffs. Pretty good for a team that had little expectation entering the season.

WILL UZI RETURN TO RNG?

Royal Never Give Up are always expected to be in the playoffs. That they made it again this split, even without Jian “Uzi” Zi-Hao playing a game, was no surprise. Lu “Betty” Yu-Hung played in his place and RNG snuck into the playoffs at 8-8.

We started the comeback but we couldn't take it to game 5 and are out of playoffs.

Congratulations @EDG_Edward and good luck in the rest of playoffs!

See you all next split, we truly appreciate the support from everyone and are sorry for not going further. pic.twitter.com/GDlsIu5m7L

But given their recent form, it also wasn’t surprising to see RNG lose to EDward Gaming 3-1 in round 1 to quickly exit the playoffs. Betty definitely wasn’t RNG’s problem, but it’s easy to wonder if RNG could have pulled off this series if they had the services of Uzi.

Now, we have to wonder if we’ll ever see Uzi play for Royal Never Give Up again. While he was surely stuck in Wuhan for a while, other players have made their way back to their teams as travel restrictions have been lifted. For Uzi to not have returned, he must have had some kind of personal issue or injury preventing him from playing.

Or, Uzi has already decided his time with RNG has run its course. Unlike most contracts, Uzi’s actually expires between the Spring and Summer Splits. On April 30th, Uzi becomes a free agent. Assuming his wrists are good enough to make another run, teams with more potential than RNG will be able to come calling for his services. Considering Uzi has said on his stream that this could be his last year, he could look to latch onto a stronger team to try for one last run at a World Championship.